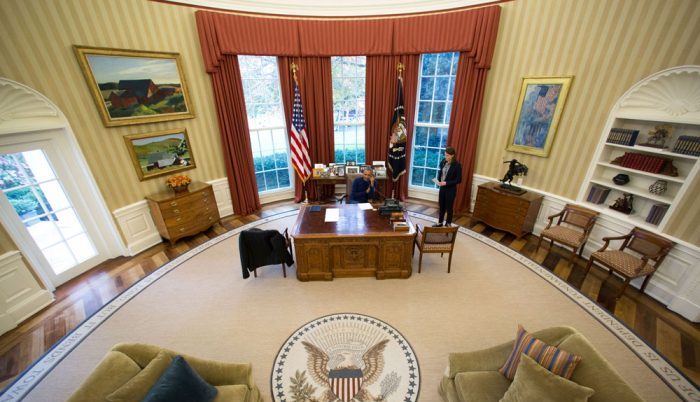 The Washington Free Beacon disclosed that a former Iranian regime official and a leader in the Iran lobby enjoyed unprecedented access to the White House under the Obama administration.

Seyed Mousavian, a former Iranian diplomat and head of the regime’s national security council, was hosted at the White House at least three times, while Trita Parsi, a pro-Iran advocate long accused of hiding his ties to the Iranian government, met with Obama administration officials a stunning 33 times, according to recently updated visitor logs.

Sources familiar with the nature of the meetings told the Washington Free Beacon that both Parsi and Mousavian helped the White House craft its pro-Iran messaging and talking points that helped lead to the nuclear agreement with Iran. These efforts were part of a larger pro-Iran deal “echo chamber” led by senior Obama administration officials who were tasked with misleading Congress about the nature of the deal.

Mousavian, who also served as Iran’s spokesperson during negotiations with the international community on the Iran deal, visited with White House National Security Council official Robert Malley, who advised the former president about the Middle East and the Islamic State terror group.

“Mousavian was Iran’s ambassador to Germany back in the 1990s, when that embassy was the central node of Iran’s European terror network and those in Germany were murdering dissidents in Berlin,” one veteran Iran analyst who frequently works with Congress on the issue told the Free Beacon. “Later he came to the U.S., where he’s being paid for with tens of thousands of dollars from the Ploughshares Fund, which funded the Ben Rhodes echo chamber.”

Parsi, head of the National Iranian American Council, a group tied to the broader Iran lobbying movement and tied to the Obama White House that helped spearhead a pro-Iran narrative, met with several senior Obama administration officials during dozens of visits to the White House, the logs show.

This included private, one-on-one meetings with Obama adviser Ben Rhodes, who helmed what he described as the White House’s pro-Iran deal “echo chamber,” as well as meetings with Malley and Colin Kahl, national security adviser to former Vice President Joe Biden. Parsi also met with the White House NSC’s director for Iran, its senior director, legislative liaisons, and public engagement officials, according to sources familiar with the nature of these meetings.

In one instance, Parsi was signed into the White House by Solomon Tarlin, a West Wing intern and supporter of the Middle East advocacy group J Street.

Free Beacon quoting an expert on Pentagon writes: “Talk about letting the fox into the hen house. Letting the head of an organization whose foreign policy positions are indistinguishable from the Islamic Republic more than 30 times would be analogous to letting the Soviet Union’s chief lobbyist help guide policy during the Cold War.”

“During the Bush administration, Parsi thought nothing of dining with [Former Iranian President] Mahmoud Ahmadinejad, and his private emails, released as part of a court-ordered discovery process, show that he lied to the U.S. press and coached Iranian officials in order to weaken sanctions and promote the Islamic Republic,” The expert said.

The visitor’s logs reveal the depth of Parsi’s involvement in building the false narrative of the Iran nuclear deal and also may explain why the Obama administration was quick to appease the mullahs in Tehran, by forgoing linking such important issues as ballistic missiles, human rights and terrorism.

With the incoming Trump administration, it is almost assured that Parsi’s access to the White House and key advisors has been reduced to zero, which explains why Parsi now has taken to authoring editorials in a tedious effort to influence a monumental shift in American foreign policy.

In many ways Parsi efforts are more akin to the Little Dutch Boy sticking his finger in dike than his previous august position as White House visitor.

In a piece for Foreign Policy, Parsi trotted out the same, tired talking points: Iran is good. Saudi Arabia is bad. Hard liners will be empowered in Iran. Trump’s cabinet picks are war mongers. Iran does not support proxies.

Parsi’s efforts to try and convince everyone that Iran does not fund and control Hezbollah or Shiite militias in Iraqi or Houthi rebels in Yemen is pathetic and patently false. All anyone has to do is follow the trail of cash and arms from Tehran to all parts of the Middle East and you can see how the Iranian regime sits at the center of the proxy wars in the region.

But Parsi’s efforts may be waning as he and his Iran lobby colleagues shift chaotically from issue to issue in an effort to keep up with the wide ranging agenda of the Trump administration which called for a moratorium on Syrian refugees pending verification of their backgrounds in a nod to the Islamic extremist terror attacks taking place across Europe in Paris, Nice, Brussels and Berlin.

A new poll revealed in the Wall Street Journal that support for Hassan Rouhani among the Iranian people has plummeted as years of war and economic stagnation coupled with unrelenting human rights abuses had sapped his favorability.

The survey results paint a picture of an Iranian public wary and skeptical about the economic benefits they thought it would bring as a result of the Iran Deal.

Conducted in December for the University of Maryland, the survey is based on telephone interviews with 1,000 Iranians and provides a gauge of public opinion in a country where independent polling is rare.

“Rouhani’s popularity is taking a hit primarily because he is perceived to have failed to deliver on his campaign promises,” said the president and chief executive of Toronto-based company which conducted the survey on the school’s behalf.

About 51% said the country’s economic conditions were worsening, up from 43% in June. Almost three-quarters of the Iranians surveyed said the deal hadn’t improved people’s living conditions.

With the presidential election looming in May, it is almost assured that the regime will once again rig the election to deliver a candidate in lock-step with the mullahs’ policies and those of top mullah Ali Khmenei.