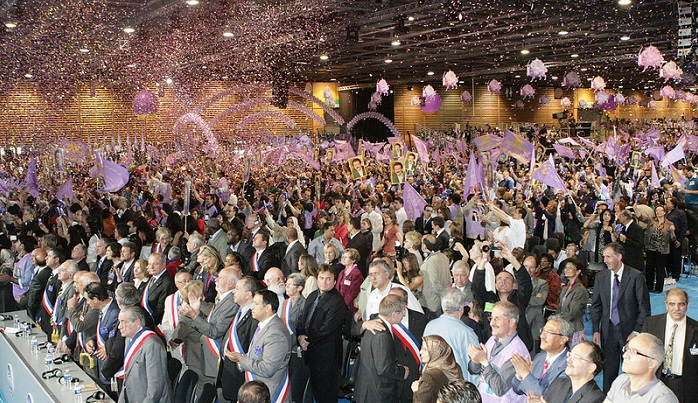 100,000+ People’s Mojahedin Supporters Attend Annual Rally
NIAC claims to be the largest grassroots organization in the US, but has only about 2,000 supporters.
In contrast, the People’s Mojahedin (MEK) has a substantial number of supporters worldwide. Its June rally in Paris annually attracts more than 100,000 people.

One might describe Parsi and NIAC to be apologists for the Iranian regime and nothing more.  But if this were true, why have they mounted vicious attacks against the People’s Mojahedin (PMOI), using the same false information as the Iranian regime?

Iran’s mullahs fear the PMOI and expends tens of millions of dollars annually to demonize the organization.  Iran’s Ministry of Intelligence and Security (MOIS) operates attack websites castigating the PMOI, publishes books and articles falsely describing the organization’s history and aspirations, daily spews out anti-PMOI articles from state propaganda outlets, and utilizes undercover agents to distribute disinformation about the organization to government officials, NGOs, and the media.

The disinformation distributed by Parsi and NIAC is nearly identical to that of Iran’s MOIS.  In both cases, all of the materials is negative and there is no attempt to provide balance by including alternative viewpoints.

In fact, NIAC allocates more time and resources to attacking the PMOI than addressing human rights violations by the Iranian regime!  Only on occasion does the NIAC criticize the mullahs’ human rights record.  By comparison, Parsi and NIAC developed a separate website (hosted on their server) named www.mekterror.com that is dedicated to demonizing the PMOI.

On the NIAC website, visitors are encouraged to contact their Congressional members and express their opposition to the PMOI.  In the past, attacking the People’s Mojahedin was the third most important issue for Parsi and NIAC.

So why did Parsi and NIAC create a separate website to attack the PMOI and distribute the same disinformation about the organization as Iran’s mullahs?  Because they operate in lockstep with the Iranian regime and they share the same agenda.