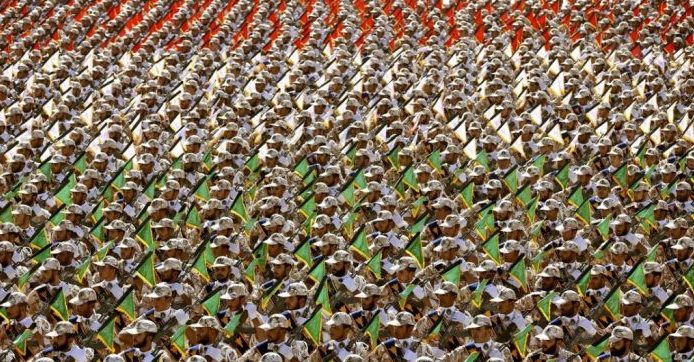 The Trump White House’s deliberations over designating the Iranian regime’s Revolutionary Guard Corps as a Foreign Terrorist Organization (FTO) is a monumental and long overdue step on the road to finally blocking the expansion of extremism in the region.

For too long, past administrations have placed sanctions on aspects of the IRGC, including specific leaders and even units within it such as the Quds Force, but none had been willing to seriously raise the question about designating the IRGC as a whole.

For the U.S., this administration’s team is making a series of calculations based on the fundamental truth about the IRGC, which is that to solve the puzzle of rising Islamic extremism, you cannot nibble at the edges, but have to attack it at its center.

The White House is likely to move more quickly on the designation of the Islamic Revolutionary Guard Corps, which could be less of a challenge to implement, one person familiar with the discussions said. It was unclear when a decision would be made on that designation, according to the Wall Street Journal.

The Revolutionary Guard is the Iranian regime’s elite military unit and reports directly to top mullah, Ali Khamenei, with a command separate from Iran’s traditional military. It was established following the 1979 Islamic revolution in Iran and over the past decade has also grown to dominate Iran’s economy, with holdings in property, oil and gas and telecommunications. U.S. officials estimate the IRGC controls as much as 50% of Iran’s economy.

Taking the step of designating the Revolutionary Guard as a terrorist organization would give the U.S. further latitude to target the IRGC’s finances and companies, which would affect large sectors of Iranian regime’s economy.

Emanuele Ottolenghi, an expert at the Foundation for Defense of Democracies who supports the move to designate the IRGC, said it would go beyond efforts by the Bush administration to more narrowly target the military group’s illicit trade and funding for terrorism.

“The net effect would be more significant. It would cast the net more widely,” he said.

According to the Journal, there is broad and bipartisan support within Congress to designate the IRGC and levy additional sanctions much to the chagrin of the Iran lobby which went into full-defense mode and scrambled to block this latest in a string of moves aimed at the regime.

Loyal regime ally, the National Iranian American Council issued talking points opposing the designation which was a verbatim regurgitation of past defenses of the regime and offered nothing new; hanging its hat on the sole prospect that the nuclear deal would be jeopardized.

The move to designate the IRGC strikes at the very heart of the economic engine that fuels the mullahs rule and expansion of terrorism in the region.

Without access to the ill-gotten gains they secure from the industries controlled by the IRGC, the mullahs could not support their proxy wars, could not upgrade its military and could not continue to funnel cash to the Assad regime in Syria or keep Hezbollah afloat.

As pointed at in a piece for the Daily Caller, targeting the IRGC is the culmination of a long series of militant actions by the IRGC that has resulted in loss of U.S. lives.

Iran and elements of the IRGC were implicated several times in assisting in the killing of U.S. soldiers in Iraq. Marine Gen. Joseph Dunford, chairman of the Joint Chiefs of Staff, told Congress a year ago, “I know the total number of soldiers, sailors, airmen and Marines that were killed by Iranian activities, and the number has been recently quoted as about 500.”

It could also cripple the Iranian regime to a point where the prospect of true democratic reforms could finally emerge.

Of course all of this is only hopeful speculation at this point, but the prospect of aggressive action against the regime after years of trying to appease the mullahs bore no fruit is a welcome turnaround for critics of the regime and should provide a valuable morale boost to the long struggle against the regime waged by Iranian dissident groups.

Shahriar Kia, a political analyst and member of the Iranian opposition, the People’s Mujahedin Organization of Iran (PMOI, also known as the MEK), wrote in the Hill that the Kayhan daily, the known Khamenei mouthpiece, revealed the Iranian regime’s terrified status quo, describing this as a “historic turn.”

“There are times when developments take such an unprecedented pace, making any forecasting about the future quite difficult,” the piece reads.

Ali Khorram, an Iranian Foreign Ministry official, suggested the mullahs’ regime should use “common sense” and keep a low profile during such times.

The state-run Iran daily wrote, “This measure by Iran provides an excuse for Trump to take actions against Iran, increasing his intention to disrupt the status quo resulting from the Iran nuclear deal.”

That has to be pretty disturbing to them.