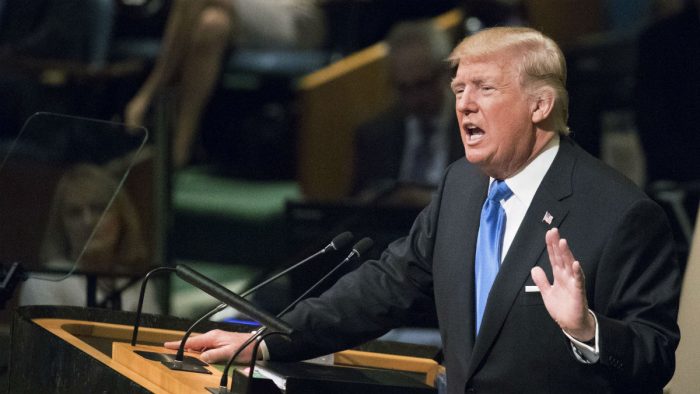 President Donald Trump delivered his first address to the opening session of the United Nations General Assembly and garnered the predictable range of reactions based on whether you support his administration or not.

For critics, especially the Iranian regime, his speech was filled with dark imagery that threatened to tear up the Iran nuclear deal, while for his supporters he offered a clear vision of American foreign policy based on conservative values he detailed on the campaign trail.

The fallout from the speech has been predictable from the media pundits to think-tank analysts to foreign leaders. From his supporters, such as former House speaker Newt Gingrich, the president’s speech echoed the themes of conservative stalwarts such as President Ronald Reagan, Britain’s Margaret Thatcher and France’s Charles de Gaulle.

“The chief nationalist in this administration is Donald J. Trump. And he knows what he’s trying to say,” Gingrich said. “It’s not a one-sided American nationalism, it’s a re-centering on sovereignty that’s really, really important.”

The president grounded his speech in re-statement of American principles based on the sovereign right of nations to act in their own interests, but so long as they respected the rights of their people and the other nations. He drew a sharp distinction with the few rogue nations that acted to oppress their own people and cause regional and global instability.

He singled out the Iranian regime, North Korea and Venezuela and expanded on the threats facing the world beyond terrorism and conventional warfare to include the more modern threats posed by “international criminal networks traffic drugs, weapons, people, force dislocation and mass migration, threaten our borders and new forms of aggression exploit technology to menace our citizens.”

This was an interesting focus for the president since Iran and North Korea have been at the forefront of state-backing of criminal enterprises, including smuggling arms, aiding the global narcotics trade and supporting a thriving black-market economy. Both regimes have used profits from these illicit activities to fund their respective nuclear and ballistic missile programs.

The fact that North Korea licensed its missile technology to Iran and hosted Iranian military and science personnel is proof of the deep relationship between the two regimes; a fact that President Trump finally called out into the open.

While many critics have tried to make hay over the president’s emphasis on national sovereignty, they neglected to understand the context of his statements which was strong, independent nations were necessary to forming a more effective United Nations. Weak or timid nations are not going to stand as guardians for international peace and history has taught us that harsh lesson many times from the appeasement of Hitler’s Germany in the 1930s to the collapse of any opposition to a tough Iran nuclear deal.

President Trump’s call for sovereignty was also a direct challenge to the Iranian regime’s efforts to create a Shiite sphere of influence from Lebanon and Syria to Iraq and Yemen. His recognition of the mullahs’ territorial appetites also set the stage for the larger debate about the Iran nuclear deal which is the fatal flaws in it in the first place.

The argument that critics of the nuclear deal have long made was that it was badly flawed in the first place. It never set restrictions on delivery systems such as ballistic missiles and it never sought to tie Iran’s human rights record or support for terrorism to the agreement.

Most glaringly, it did nothing to curb Iran’s appetite for regional conquest as exemplified by the regime’s accelerated push into Syria to support the Assad regime once it was signed. Iran’s Hassan Rouhani himself boasted that Iran’s nuclear program could be restarted in a matter of hours if the deal was torn up by the U.S.; hardly a guarantee of international security.

French President Emmanuel Macron said on Wednesday the Iran nuclear deal was not enough given that Tehran had increased its influence in the region and pressed ahead with ballistic missile tests, and offered to mediate between the United States and Iran, according to Reuters.

His statements offered more validation for President Trump’s contention that supporting a flawed deal in the first place was no sure pathway to nuclear peace.

“Is this agreement enough? No. It is not, given the evolution of the regional situation and increasing pressure that Iran is exerting on the region, and given increased activity by Iran on the ballistic level since the accord,” Macron told reporters in New York.

“Let’s be honest, the tensions are on the rise, look at the activities of Hezbollah and Iran’s pressure on Syria. We need a clear framework to be able to reassure regional countries and the United States,” Macron said.

The Iranian response was predictable as Rouhani attacked President Trump’s remarks in his own address to the UN General Assembly calling it “ignorant, absurd and hateful rhetoric.”

Rouhani expanded on his attacks in an interview with NBC News claiming that “no one will trust America again” should the Trump administration walk away from the Iran nuclear deal.

It is a silly argument to make since the mullahs in Tehran have never trusted the U.S. no matter who was president. They only viewed the nuclear deal as a vehicle to gain breathing room and relief from crippling economic sanctions and gain a huge financial windfall of billions of dollars they used to fund wars in Syria and Yemen and quickly accelerate their ballistic missile program.

Rouhani speaking of “trust” is comical given the Iranian regime’s pathetic record on making grandiose promises to its own people and cruelly breaking every one of them.

In fact, Rouhani himself made bold promises of reforms in the regime and expanding the role of women in the government; yet in picking his own cabinet, he did not select a single woman for any senior leadership role and filled it with old, veteran hands of the Revolutionary Guards and Ministry of Intelligence.

In many ways President Trump’s blunt assessment of the Iran, North Korea and Venezuela is bold departure from the normal flowery language of the UN and diplomacy, but the world has already seen that over the past two years diplomacy has yielded nothing from those three regimes, especially Iran.

It may be time to try a different tack and actually hold Iranian regime accountable.