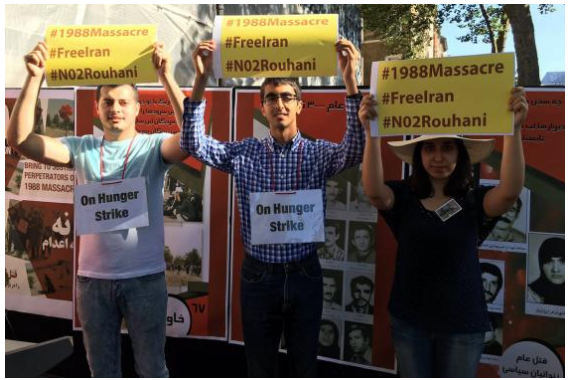 Protests and Demonstrations Mount Against the Iranian Regime

In many ways, defiance at the Iranian regime occurs on a daily basis around the world, although much of it escapes the glare of media coverage. Sometimes it is brash and displayed on social media such as when Iranian women took selfies without wearing hijabs as required by the regime or when their husbands or friends posted selfies of themselves wearing hijabs in support.

Defiance flows out of Iran itself as thousands of Iranians express their anger and frustration over the deeply rooted corruption within Iran’s government and industries as exemplified in the revelations of rich paychecks for top regime officials.

Around the world that defiance comes from places high and low as evidenced by U.S. Senators who grilled Secretary of State John Kerry over the $400 million cash payment to the Iranian regime at the same time four American hostages were being released; in an exchange widely viewed by them as a ransom payment.

The Obama administration has vigorously denied any connection or a ransom payment, but more important than the administration’s denials is the admission by Iranian regime officials that as far as they are concerned, release of the hostages was intricately linked to the cash payment. For the regime, the two issues are indistinguishable, which bodes ill for future American hostages.

Dr. Majid Rafizadeh, an Iranian-American political scientist, author, business advisor and public speaker and president of the International American Council, wrote an editorial in FrontPage magazine warning of the problems this precedence will cause.

“Iran is quietly arresting American citizens and taking them as hostages in order to utilize them as pawns for extracting economic concessions or receiving political and financial gains,” he writes. “As part of a string of arrests of American citizens, the Iranian authorities confirmed that they have arrested yet another US citizen, Robin Shahini, who was visiting his ailing mother. Mr. Shanini was not a political or human rights activist. The Iranian government arrested him on vague charges such as conducting crimes against the Islamic Republic. The Iranian government warned his family not to speak with the media.”

“The Islamic Republic of Iran is clearly attempting to show the United States as well as young Iranians that the nuclear agreement does not mean the Islamic Republic will welcome Westerners, open up its political and economic systems, and promote social justice and civil liberties,” he added.

The world even got a startling reminder of the Iranian regime’s past when former president Mahmoud Ahmadinejad sent a letter to President Obama asking for the U.S. to return $2 billion in damages the U.S. Supreme Court awarded to families of people killed in attacks linked to the Iranian regime.

The timing of the letter, however, is interesting as Ahmadinejad’s name continues to circulate as a possible challenger to current leader Hassan Rouhani in Iran’s coming May 19 election and may indicate that Rouhani’s usefulness as a “moderate” face to the regime may be coming to an end.

The most heart-rending and indeed most poignant acts of defiance come from those opposed to the Iranian regime’s bloody records of executions; something Rafizadeh noted in another piece he submitted to Huffington Post.

“Since January 2016, Iran has executed at least 230 people that is at least one person a day on average. The number of executions has recently increased and Iran ranks first in the world, followed by China, when it comes to executions per capita. Iran executed approximately 1000 people in 2015,” he writes.

“In 2016, Iran is yet again the regional leader in executions – at least 230 – while it continues to be a laggard in implementing illusory penal code reforms meant to bridge the gap with international standards.”

Among these executions is the largest mass execution of its kinds in years, of a religious minority in which at least 20 Sunni inmates were mass executed. Human Rights Watch denounced the mass execution and called it “shameful low point in its human rights record”

In addition, among the latest and prominent executions in the months of August and July are the executions of the nuclear scientist Shahram Amiri and a gay adolescent Hassan Afshar, a 17-year-old high school student when he was arrested.

Marzieh Amiri, the mother of the executed nuclear scientist, said she obeyed the regime authorities’ orders and refrained from speaking to the press until now because she had been led to believe that her son would eventually be freed if she stayed quiet, said she visited him at what appeared to be a military barracks on August 2, 2016, the day before his execution.

“At first there was no talk of putting him in prison or executing Shahram. All this happened later on.…It is Iran’s hardliners who are creating chaos in the world. They hanged my son. They framed him. Whatever my son said, they wrote down the opposite. They picked a lawyer for him who was on their side. They wrote down what they wanted, showed it to the judge, and he would agree. Shahram wasn’t even taken to court to be told what he had done wrong,” she said.

Another form of protest is taking place in front of 10 Downing Street in London, the official residence of the British prime minister, in which protestors launched a three-day “hunger strike” over mass killings in Iran.

They are urging the UK government and the UN to condemn hanging in the country, which carries out the second highest number of executions in the world.

Newly installed British Prime Minister Theresa May raised her own concerns with Rouhani in a phone call over the plight of Nazanin Zaghari-Ratcliffe, a British-Iranian charity worker, 37, of north London, who was arrested while she was at an airport with her daughter Gabriella after visiting her family on holiday is due on trial on as yet unspecified charges.

Her two-year-old daughter had her British passport taken away and is staying in Iran with Zaghari-Ratcliffe’s parents but is unable to leave the country.

Her husband said he believes his wife and child are being used as a “political bargaining chip.”

We can only hope it won’t cost the British $400 million for her release.