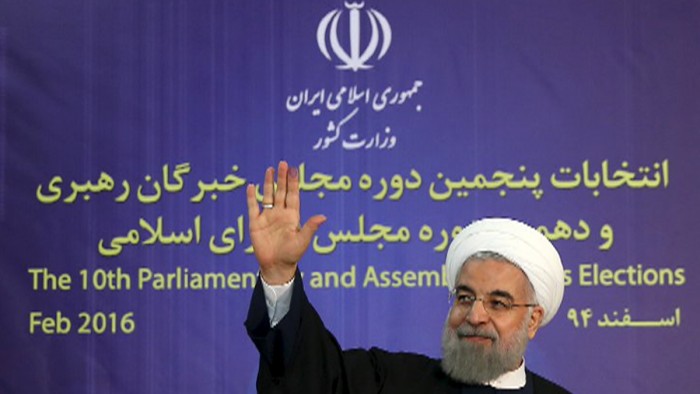 Basking in the afterglow of the Iranian regime’s parliamentary election results, the Iran lobby predictably boasted of the massive wins by moderate and reformist forces within Iran, but now the pushback is coming from a wide variety of the political spectrum as the results and actual winning candidates are absorbed and evaluated.

The realization is settling in that far from the moderate tsunami described by regime supporters such as Trita Parsi and Reza Marashi of the National Iranian American Council, the truth is that very little has changed within the regime leadership and the Iranian people still remain firmly in the grip and thrall of the mullahs.

The parade of cold water on the moderate landslide theory was led by the editorial board of the Washington Post, which has intimate first-hand knowledge of the extremist nature of the regime through the hostage taking and eventual prisoner swap of its reporter, Jason Rezaian. It editorialized:

“Claims of a reformist triumph, however, are overblown. Before the elections, an Iranian liberal coalition said that 99 percent of 3,000 pro-reform candidates had been disqualified by a hard-line clerical council. Most of those in Mr. Rouhani’s coalition are, like him, moderate conservatives, meaning they favor economic reforms and greater Western investment, but not liberalization of the political system or a moderation of Iran’s aspiration to become the hegemon of the Middle East. True Iranian religious and political reformers, like those who joined the 2009 Green Movement, are in jail or exile, or were banned from the ballot.

“For now, Iran can be expected to continue the course it has been pursuing in the months since the nuclear deal was struck: waging proxy wars against the United States and its allies around the Middle East, using its unfrozen reserves to buy weapons, and defying non-nuclear limits — such as by testing long-range missiles. The elections won’t make the regime more pliable, and they won’t change the need for a U.S. counter to its aggressions. They shouldn’t provide an excuse for the Obama administration to tolerate Tehran’s provocations,” the Post said.

The Post is correct in its assertions and admits to the basic problem facing those nervously praising the “moderate” wins: they are left with hoping for the best outcome even though it will most likely come to pass since the alternative is to face the difficult choices of pushing for regime change against a regime firmly entrenched.

The Atlantic’s Kathy Gilsinan noted some of the difficulties in the tea leaf reading going on post-election in discerning who actually won.

“Institutions whose members aren’t popularly elected, including the office of the supreme leader, the Guardian Council, the judiciary, and the security services, are the most powerful in Iran’s government. And they remain in the hands of hardliners,” she writes.

“Another reason it’s difficult to know the significance of these elections—aside from the dueling claims of victory from each camp, and the fact that, as Thomas Erdbink of The New York Times reported Wednesday, ‘there has been no official comment on the affiliation of the winning candidates’—is that Iran does not have strong political parties. Knowing that Republicans have a majority in the U.S. Congress, for example, gives you a rough sense of that body’s legislative priorities and how they would differ from those of a Democratic Congress. As Majlis Monitor, a website devoted to Iranian politics, notes, ‘While political parties help us see a country’s political fault-lines, their absence in Iran makes it difficult to understand how politics are actually [organized] and work there.’”

This points out the fundamental problem with the claims being made by Parsi or Jim Lobe over at Lobelog that moderates won the election: the absence of political parties stems from the mullahs aim to eliminate all dissent and organize the government around homogenous support for the Islamic revolution. True dissident parties such as the Mojahedin Khalgh (MEK or PMOI) were outlawed and membership was classified as punishable by death.

There is no doubt that the Iranian people want real reform and a true turn towards democracy. They are tired of living in an oppressive regime where their every online move is monitored and their every economic move is stymied by widespread official corruption.

The New York Times’ Erdbink also explained how results of the election may never be publicly revealed.

“The Interior Ministry, which is overseeing the voting for the 290-seat Parliament and the clerical Assembly of Experts, announced on Tuesday the names of 222 parliamentary candidates who won nationwide. It also announced that there would be a second round of voting for 68 seats in several constituencies in April,” he said. “But there has been no official comment on the affiliation of the winning candidates, and there may never be, making it difficult to determine how many seats the various factions have won.”

The Interior Ministry also oversees the internal security for the regime and already has a checkered history with the hijacking of the 2009 elections. It wouldn’t be unreasonable to see some similar shenanigans with these results to ensure the right kinds of “moderates” eventually won seats.

“Efforts to distinguish Tehran’s moderates from hard-liners have a long historical record of failure, as have similar precedents in analyzing Moscow and Beijing. Today in Iran, while there are disagreements over economic, social and religious policies among the elite, there is no disagreement over the objective of mastering the difficult science and technology required to achieve nuclear weapons deliverable on ballistic missiles. There is simply no credible evidence that the ayatollahs and other key Iranian leaders have ever diverged on that goal. Moreover, the nuclear and ballistic missile programs are firmly controlled by the Revolutionary Guards, which is about as likely to cede responsibility to the elected Majlis as to America’s Congress,” he writes.

Ultimately the real test of real reform will come if Evin Prison is emptied, ballistic missiles are shelved and support is withdrawn from Syria, Iraq and Yemen.

I wouldn’t hold your breath for that.