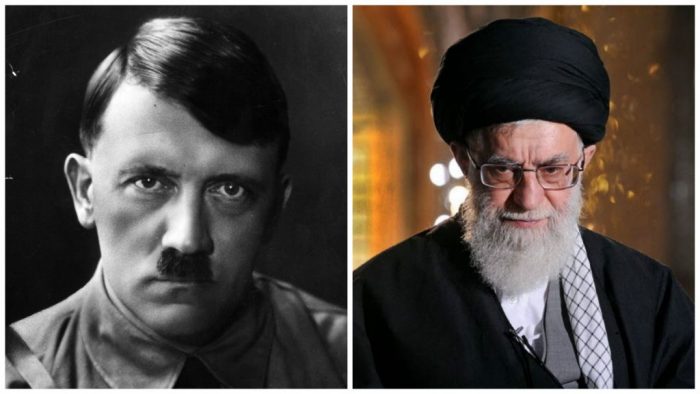 In an escalating verbal war of words, Saudi Arabia’s crown prince Mohammad bin Salman called the Iranian regime’s top mullah, Ali Khamenei, “the new Hitler of the Middle East” and warned that like the history of Europe, “appeasement doesn’t work.”

“We don’t want the new Hitler in Iran to repeat what happened in Europe in the Middle East,” bin Salman, told The New York Times in an interview published last week.

What is remarkable is not that the crown prince made those comments, but that news media treated it as earth-shattering. Human rights groups, Iranian dissidents, families of prisoners languishing in regime prisons have long called out Khamenei and his procession of handpicked presidents such as Mahmoud Ahmadinejad and Hassan Rouhani as tyrants long modelled on the bloody blueprint of Hitler’s Nazi Germany.

It is also remarkable that for once the Iran lobby was virtually silent on the crown prince’s remarks. Maybe Trita Parsi at the National Iranian American Council is finally getting the hint that shamelessly defending Khamenei is a useless exercise.

The comparison to Hitler is really neither extreme, nor shocking given the Iranian regime’s bloody history and the comparisons don’t start and stop with two megalomaniacal dictators who were power hungry for an apocalyptic vision for their countries.

No, the comparisons between the Iranian regime and Nazi Germany extend far into policies, military intervention and political propaganda.

The Nazi annexation of the Sudetenland and Austria is eerily like Iranian regime’s moves into Yemen and Syria, even using the pretext of fighting ISIS the same as the Nazi’s used the excuse of Bolsheviks to invade its neighbors.

But where the two regimes share the most is in their respective preferences for oppressing minorities and making liberal use of state courts to weed out less desirables from their societies.

For the Nazis, their policies of “racial purity” not only targeted Jews for extermination, but sent millions of Russians, Poles, gypsies, the mentally ill, gays and countless others to their deaths.

For the Iranian regime, its litmus test is religious where the mullahs view anyone not adhering to their branch of extremist belief an apostate and worthy of elimination. This explains why the regime has historically targeted minorities such as the Baha’i, Kurds, Christians and Sunnis for imprisonment and oppression.

Also, while the Nazis relied on the dreaded Gestapo and SS to enforce security at home and wage war abroad, the Iranian regime relies on its morality paramilitaries and zealous Revolutionary Guard Corps and Quds Force to achieve the same goals.

The resemblance between the two regimes is eerie and the crown prince does not make the comparison lightly.

Just as Nazi Germany gained appeasement with the West through the much-maligned Munich Agreement, Iranian regime did the same with the Iran nuclear deal; both documents weren’t worth the paper they were printed on and both launched a period of global unrest as the Nazis and mullahs took the opportunity to pursue their ambitions.

It is no coincidence that after Rouhani was elected to his first term and widely lauded as a “moderate” by news media that the regime undertook one of its most brutal crackdowns on dissent rounding up and imprisoning thousands of journalists, students, artists and activists.

Now the world is left to pick up the wrecked pieces of the Middle East that sees the Iranian regime now in control of Syria and Lebanon outright and having a pervasive influence over Iraq, Afghanistan and Yemen.

It’s almost like comparing Iran to Nazi Germany after the blitzkrieg of 1940 that saw it claim most of Western Europe.

But like Great Britain, Saudi Arabia has offered itself as a regional bulwark, opposing Iran in Syria, Yemen and the Gulf region and loudly calling on the rest of the world to recognize the danger the regime poses.

If the crown prince’s words are not enough, the Iranian regime added fuel to the fire when the regime’s deputy head of the IRGC warned Europe that the regime was increasing the range of its missiles to over 2,000 km, allowing it to strike at the heart of Europe.

The comments come as the French president has warned of the threat Iranian regime’s missile program poses and the Trump administration expands its sanctions list to include elements of the IRGC and those connected to its missile program.

The warning from Iran should not be considered superfluous, but rather a clear threat to the continent and an unmistakable shot across Europe’s bow.

The irony of Iran’s actions to Hitler’s speeches to blaming its enemies for driving Germany into the ground in the aftermath of World War I is striking and serves as a reminder that repeating the mistakes of the 1930s today will only lead down a path of regional conflict and even more suffering for the Iranian people.