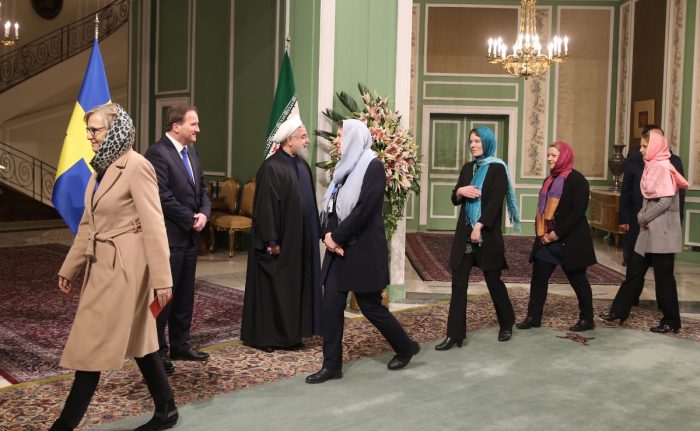 Rebuilding the Global Coalition Against Iran

The early days of the Trump administration have offered opponents of the Iranian regime hope that a significant change in U.S. policy towards the Islamic state will presage a similar shift in global opinion towards the mullahs in Tehran.

If we reset back to when the first talks took place over Iran’s nuclear program, the unity amongst the international community was one of the hallmarks of forcing the regime to the bargaining table in the first place.

Three consecutive American presidential administrations imposed ever growing harsh sanctions on the regime. Coupled with the sinking Iranian economy due to gross mismanagement and corruption, the regime was brought to the bargaining table in a position of weakness. The mullahs recognized this in rigging a presidential election to install Hassan Rouhani as a benevolent “moderate” face following the much-reviled Mahmoud Ahmadinejad.

Unfortunately, instead of seizing the opportunity to effect significant changes to the regime’s conduct—especially its brutal human rights record and support for terrorism—the P5+1 group of nations, led by the Obama administration, picked the appeasement policy as its policy forward and folded like a cheap suit in caving to regime demands.

Gone were any restrictions on Iran’s ballistic missile program. Say goodbye to improving human rights within Iran. Forget about stemming the flow of terrorism around the world.

The opportunity to solve so many troubling problems through the single chance to make change within the Iranian regime was missed and for the past six years the world has paid a heavy price for that oversight.

While Iran lobby supporters such as the National Iranian American Council have been busy trumpeting the “wins” from the agreement, cities around the world have witnessed a much more dismal result.

Paris, Ottawa, Brussels, Sydney, Nice, Berlin, San Bernardino, Boston and Orlando are only some of the cities subjected to Islamic extremist terror, but far worse has been the whole sale slaughter committed in places such as Aleppo at the hands of Iranian regime forces.

Now with the Trump administration in place with the first encouraging signs of reversing the flow of moves aimed at appeasing the regime to one that is more confrontational and accountable, the diplomatic board has been reset with a fresh opportunity to rebuild that global coalition that was so effective before.

Reassembling a global consensus against the Iranian regime will be difficult, but it is achievable. The first promising signs have come from a Trump administration that has found prominent policy making positions for noted and vocal critics of the regime, including Mike Pompeo at the Central Intelligence Agency, Jeff Sessions as Attorney General and James Mattis as Secretary of Defense.

There has also been a unifying response from Iran’s neighbors, especially Arab nations who have been subjected to the prospect of terror attacks and outright war, including Saudi Arabia and the Gulf states. Their inclusion in any global consensus building against Iran will be vital.

Also, unlike the prior administration, the Iran lobby has been frozen out of the equation and does not have the same access it enjoyed previously into the White House and State Department. White House visitor logs are unlikely to show the National Iranian American Council’s Trita Parsi traipsing through the West Wing anymore.

Already, we have seen some possible signs of the Trump administration’s efforts to rebuild a relationship with Russia and drive a wedge between Russia and Iran. Of course, separating the two may prove unachievable, but it does set the scenario for Trump to engage in some old fashioned horse trading in which the Vladimir Putin might be induced to give up his support for Iran in exchange for something else.

An editorial by a scholar at the Foundation for the Defense of Democracies, offered some thoughts on how Russia might be persuaded to change its support for Iran in an editorial in the Wall Street Journal.

“What, then, is the best American strategy? Iran continues its campaign against the U.S., and it won’t end so long as the regime endures. Therefore American policy must rely on dismantling the Khamenei regime as peacefully as possible, perhaps from the inside out,” the editorial writes.

“Antiregime demonstrations erupt in Iran all the time, and most experts believe the vast majority of Iranians detest Mr. Khamenei and his henchmen. With U.S. support, these millions of Iranians could topple the Islamic Republic and establish a secular government resembling those in the West,” he adds. “With the Islamic Republic gone, the Trump administration would be in a much stronger position to strike a deal with Mr. Putin. The road to Moscow runs through Tehran.”

The more troublesome part of any international coalition might be getting a unified Europe which has responded to the lifting of economic sanctions on Iran with an unbridled rush to tap Iranian markets. Who can forget the parade of EU officials leading trade delegations to Tehran in the aftermath of the deal while Iranian men, women and children were being publicly executed.

Even after the swelling in terrorist attacks and flood of refugees fleeing the Iranian-caused Syrian civil war, some European leaders still seem to be adopting a position of bowing to Iranian regime demands.

One such example was the much-criticized visit of the Swedish trade minister in which she and the female members of her delegation wore hijab coverings and met with Hassan Rouhani and an all-male team.

The irony of the photo opportunity was not lost on many human and women’s rights groups.

We can only hope that the rest of Europe realizes that winning a few dollars isn’t worth empowering more terrorism.