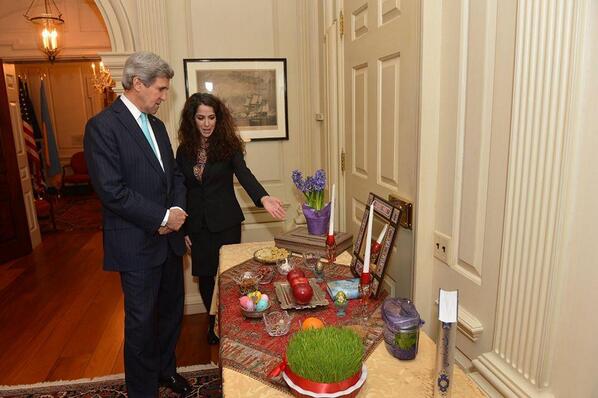 The news coming out of Switzerland reads exactly the same as it did last year and the year before that, with negotiators saying there has been progress and agreement reached on the pathway to move forward to finalize a deal. It’s Groundhog Day every day when it comes to the Iranian regime as it patiently waits for external pressures to keep building on the West to give in on its demands without giving anything up of substance.

Ironically the Iranian regime is desperate to ensure no details are leaked since it knows there would be global condemnation if everything was ever put on paper and put online. But through leaks and news stories we know the regime is on the verge of retaining its enrichment capacity through its centrifuges, they will be protected in a deep military bunker in Fordow, they get to keep their reactors, ballistic missile technology and a lifting of economic sanctions, as well as some ramp up in their activities near the end of the deal.

Providing the political cover and PR spin for this process over the past several years has been the loyal work of the National Iranian American Council, whose front-lobbyer is Trita Parsi and other staffers have been near constant fixtures in Lausanne hotel lobby bars, lounges and hallways plying their wares akin to the world’s oldest profession.

The ties between NIAC and the Iranian regime has been long established, including through a recent defamation lawsuit Parsi filed against a journalist, lost and in the process was forced to reveal sensitive emails and documents showing a much closer relationship between NIAC and high-ranking regime officials, including regime Foreign Minister Javad Zarif.

As Eli Lake writes in a Bloomberg article: “In 2006, Zarif and Parsi tried to persuade journalists to write about a peace offer Iran had supposedly offered the George W. Bush administration after the 2003 invasion of Iraq. Yet according to senior Bush administration officials, that 2003 offer was not a serious piece of diplomacy, and was not made through the channels by which the Bush administration communicated with Iran. Nonetheless, the narrative stuck that the Bush team blew a chance at a breakthrough in 2003.”

Secretary of State John Kerry repeated the Zarif line in an interview with ABC’s “This Week” earning three Pinocchios from The Washington Post which judged the claim dubious, but it was another indication of the efforts the regime was going to ensure it controlled the media narrative even while the American public and Congress grew more skeptical as sectarian violence throughout the region boiled over under Iran’s aggressive manipulation.

But the depth of NIAC’s efforts to manipulate the U.S. negotiating approach was revealed in a piece on Breitbart.com which revealed Sahar Nowrouzzadehm the National Security Council Director for Iran was a former staffer for NIAC as late as 2007 before joining the NSC in 2014.

The fact that a former staffer of a lobbying group for the Iranian regime is allowed to serve in a sensitive policy position as the U.S. strikes a nuclear deal raises some skepticism to why the U.S. has been so willing to accommodate Iranian regime’s demands.

It is in a way like allowing industry lobbyists to serve in the regulatory agencies overseeing them.

All of which raises an even larger issue. Has Nowrouzzadeh maintained contacts with Parsi and her former colleagues at NIAC? Has there been any insight or understanding to any journalists supportive of the regime, as a result? Any classified information discussed?

The furry of questions arising from this revelation is likely to raise concern for the Congressional investigators busy as they examine whatever deal eventually gets publicly released out of Switzerland, but what is worrying is that NIAC has been allowed to work tirelessly to cover for the regime and spread its influence deep into the heart of the U.S. government.