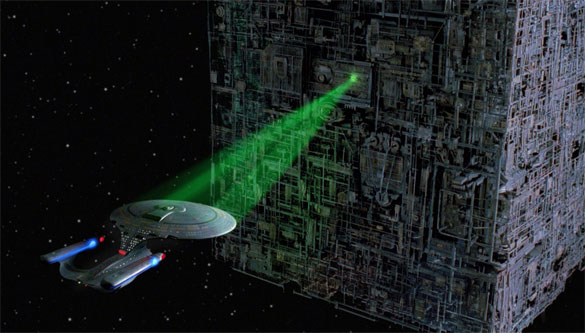 Resistance to the Iran Regime is Not Futile

For any Star Trek fan, one of the more infamous villains on the Next Generation series was the Borg; collective evil that utters the hostile demand “Resistance is futile.”

Of course the courageous crew of the starship Enterprise successfully resists the Borg and keeps humanity face from a perilous future of being absorbed by the Borg and losing all free will.

In the real world of today, the Iranian regime is strangely like the Borg. The mullahs in Tehran act as a collective mind, all lockstep in sync with their vision of creating a Shia sphere of influence and bringing all of their neighbors under the sway of their particular ideology.

And like the Borg, the Iranian regime has no humanity, is only concerned with achieving its objectives and sees the use of others—such as Afghan refugees enlisted to serve as cannon fodder in the Syrian civil war—as simply a means to an end; mere tools of statecraft.

The Guardian took a closer look at how Iran recruits these Afghans, often taking advantage of them as they face poverty or the threat of being denied entry into Iran from war-torn Afghanistan.

The newspaper found Iran is covertly recruiting hundreds of Afghan Shias in Afghanistan to fight for Syrian president Bashar al-Assad, drawing them out of their own conflict-ridden country and into another war in which Afghanistan plays no official part.

The Afghan fighters are often impoverished, religiously devout or ostracized from society, looking for money, social acceptance and a sense of purpose that they are unable to find at home, the newspaper said.

For the Iranian regime, having a loyal Afghan militia may serve a longer-term purpose beyond Syria. “It clearly serves the interests of the IRGC to train Shia Afghans who later can fight the Taliban or other Sunni groups on Afghan soil after United States military withdrawal from that country,” said Ali Alfoneh, an independent Iran analyst based in Washington, DC.

This is part of the mullahs’ long-term plan; to develop assets that can be used to deepen and strengthen its power outside its borders.

Protecting the regime’s plans is the Iran lobby which serves as dutiful drones spouting the same messages over and over again and nauseum portraying the regime as a bunch of moderates struggling against the anti-Muslim rhetoric coming from regime opponents.

The Iran lobby, such as the National Iranian American Council, labels opponents as racists, war mongers, neocons, rebels and just about any other term you can come up with; all designed to cast doubts and aspersions on anyone daring to oppose the regime.

But the remarkable truth is the opposition to the Iranian regime is wider, more diverse, more inclusive and stronger than it has ever been since the Islamic revolution in 1979.

The broad coalition opposing the Iranian regime ranges from Iranian dissident groups such as the People’s Mojahedin Organization of Iran (PMOI) and the umbrella National Council of Resistance of Iran, to human rights groups such as Amnesty International and Human Rights Watch, to government agencies and organizations such as the Special Rapporteur for Human Rights in Iran for the United Nations and members of the European Parliament, U.S. Congress and other elected officials.

The opposition is also made up of ordinary Iranian citizens who protest and demonstrate in their own ways and pay a high price for those acts, including the imprisonment, torture and the ultimate sacrifice of martyrdom.

These include Iranian students, teachers, artists, journalists, musicians, bloggers, businessmen, women, writers and filmmakers. They represent the entire width and breadth of Iran and while their actions are often covered up and obscured by a regime intent on not letting the outside world know of their discontent, social media channels have helped get the word out on their suffering and defiance.

The symbol of that resistance projected itself on July 9th just outside of Paris in a cavernous convention hall filled with tens of thousands of people from around the world who convened as part of the annual gathering of resistance groups to the Iranian regime.

While this annual event has faithfully documented the injustices and abuses meted out by the regime during the year, this year’s event was significant and special because of the sharp and dramatic rise in terrorist acts committed by Islamic extremists around the world including most notably Paris, Brussels and Istanbul.

Coupled with a pivotal American presidential election and the recent Brexit vote, the political landscape will change dramatically over the next year, which is why the Iranian regime and its lobby allies have sought to influence the politics of these elections to safeguard a badly flawed nuclear deal that is delivering vast sums of cash to the mullahs.

The regime’s top mullah Ali Khamenei has repeatedly stated that the policies of Democrats and Republicans regarding Iran are not different, because the United States is opposed to the very existence of the Islamic Republic, which will not change through diplomatic negotiations.

Hence, in Khamenei’s view, the United States is pursuing no goal other than regime change in Iran and in this respect he is not incorrect because regime change is truly the only legitimate pathway to restoring democracy and freedom to the Iranian people.

This is why these opposition groups pledged for “Regime Change” when they convened on July 9th in La Bourget- Paris.