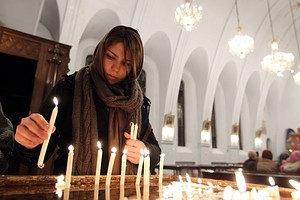 An Iranian Christian woman lights candles during the Christmas Eve mass at the St. Gregor Armenian Catholic church in Tehran on December 24, 201, as Christians around the world are celebrating Christmas. AFP PHOTO/ATTA KENARE (Photo credit should read ATTA KENARE/AFP/Getty Images)

Iranian regime president Hassan Rouhani concluded the second day of his European tour with a 40 minute meeting with Pope Francis at the Vatican in which the Pope raised the question of the “promotion of human dignity and freedom of religion”—sensitive topics for the regime, which has been under fire for its human-rights record.

Only yesterday international human rights group Amnesty International issued a blistering report denouncing the Iranian regime’s record-setting pace of executing juveniles, while Iranian dissident groups stage protests of Rouhani’s tour and freed Christian pastor Saeed Abedini going public with revelations about his brutal torture over the past several years before his release as part of a prisoner swap.

No one can fault Pope Francis for praying and hoping for a more peaceful world with Iran’s participation, unfortunately the stark political realities of the regime’s government and rock-solid devotion to its particular virulent strain of extremist Islam makes the Pope’s wishes problematic.

For his part, Rouhani came out of the meeting with the Pontiff proclaiming that the pathway to solving instability in the Middle East and suppressing Islamic extremism and terrorism would come from supporting Iran economically; as if a job and car would be sufficient inhibitors to Extremism.

“If we want to combat extremism and violence in the world, if we want to fight against terrorism, one of the paths that we have is economic development and creating jobs,” Rouhani said.

It’s a curious position for Rouhani to advocate since the economic policies of his administration have so crippled the Iranian economy, widespread dissatisfaction over low wages, deep-rooted government corruption and a yawning gap between the privileged families of the mullahs and Revolutionary Guard Corps have led to large-scale protests and demonstrations throughout Iran involving everyone from striking teachers to small business owners.

There is no broad movement towards economic reforms even with the influx of an estimated $100 billion in cash being released under the terms of the nuclear agreement according to most economists and Rouhani’s shopping list on his European tour reflects that with deals being signed mostly in heavy industries completely under the control of the Revolutionary Guard Corps including aviation, petroleum, manufacturing and shipping.

Industrial sectors benefitting ordinary Iranians such as agriculture, consumer technology, pharmaceuticals and entertainment are not part of the announced economic revitalization Rouhani has outlined.

Meanwhile the plight of religious minorities continues to be a sore spot as dozens of Christians remain in regime prisons, many for simply holding religious services in their own homes. Rouhani’s government currently requires Christians to register with the regime authorities, while their religious practices are carefully monitored by regime intelligence and security forces.

Other religious minorities such as those who practice the Baha’i faith are also dealt with harshly in Iran, as well as those Muslims diverging from the regime’s Shia faith as Abedini noted in which he and other prisoners were forced to watch hangings of Sunni prisoners on Wednesdays in the prison he was being held in.

Abedini noted how during his captivity, he had come to believe his jailers were ready to execute him as well, but recalled how Rep. Robert Pittinger (R-NC) had spoken at a mass protest rally sponsored by the National Council of Resistance of Iran in which he invoked Abedini’s name causing – he believed – the regime to reconsider killing him now that he had become a higher profile prisoner.

“That speech, you mentioned my name,” Pittinger recalls Abedini as saying. “At that time, I really believe they were thinking about killing me. All of a sudden they let up. They got afraid.”

In the last months of Abedini’s detention, while diplomats were negotiating the terms of his release, his captors began treating him very well, taking good care of him and feeding him regularly, Pittenger relays.

“He thought maybe he was headed out, perhaps they were going to release him,” Pittenger says. “’When I left here, they wanted me to look good.’ Those were his words.”

Pittenger doubts Abedini will ever return to Iran.

“He saw the bigger picture. He was arrested because of his Christian faith. He’s Iranian. He understands the government, he understands what these mullahs do. They’re tyrants and they’re very rigid sectarian Shiite Muslims, and they have no respect or tolerance for other sects, much less Christianity,” Pittenger says.

The lack of tolerance within the Iranian regime will be further exposed as the United Nation’s cultural agency, UNESCO, will challenge Rouhani on Wednesday, International Holocaust Remembrance Day, over the regime’s plans to host a cartoon contest for caricatures of the Holocaust.

The contest, scheduled for June and announced last December by the regime’s Islamic Republic News Agency (IRNA), will be held at the Tehran International Cartoon Biennial and offers a prize of up to $50,000.

The atmosphere of intolerance is emblematic of the simple fact that the Iranian regime is not opening up in the wake of the nuclear deal as promised by Iran lobby supporters such as the National Iranian American Council.

Anne Applebaum, writing her column in the Washington Post, pointed out the extremes in Iranian actions towards more intolerance and abuse.

“President Hassan Rouhani is not Mikhail Gorbachev, and this is not a perestroika moment. Iran is not “opening up” or becoming “more Western” or somehow more liberal,” Applebaum writes. “On the contrary, the level of repression inside the country has grown since the “moderate” Rouhani was elected in 2013. The number of death sentences has risen. In 2014, Iran carried out the largest number of executions anywhere in the world except for China.”

“Political pressure and religious discrimination have increased, too. Women who don’t wear veils are still vulnerable to arrest and sentencing. The penalties for apostasy, adultery and homosexuality are still high, up to and including capital punishment,” Applebaum added. “Cultural dissidents are under pressure, too, even more so since the sanctions-lifting deal was announced. On Jan. 7, the poet a poet was arrested after landing at Tehran airport and detained for 48 hours, presumably as a warning. In October, a Kurdish filmmaker received six years and 223 lashes for “insulting the sacred.”

And now with the disappearance of three more Americans in Iraq at the hands possibly of Iranian-controlled Shiite militia groups, the lack of cooperation from Tehran has been noticeable.

As Rouhani continues his tour of Europe, the evidence of regime malfeasance continues to pile up.