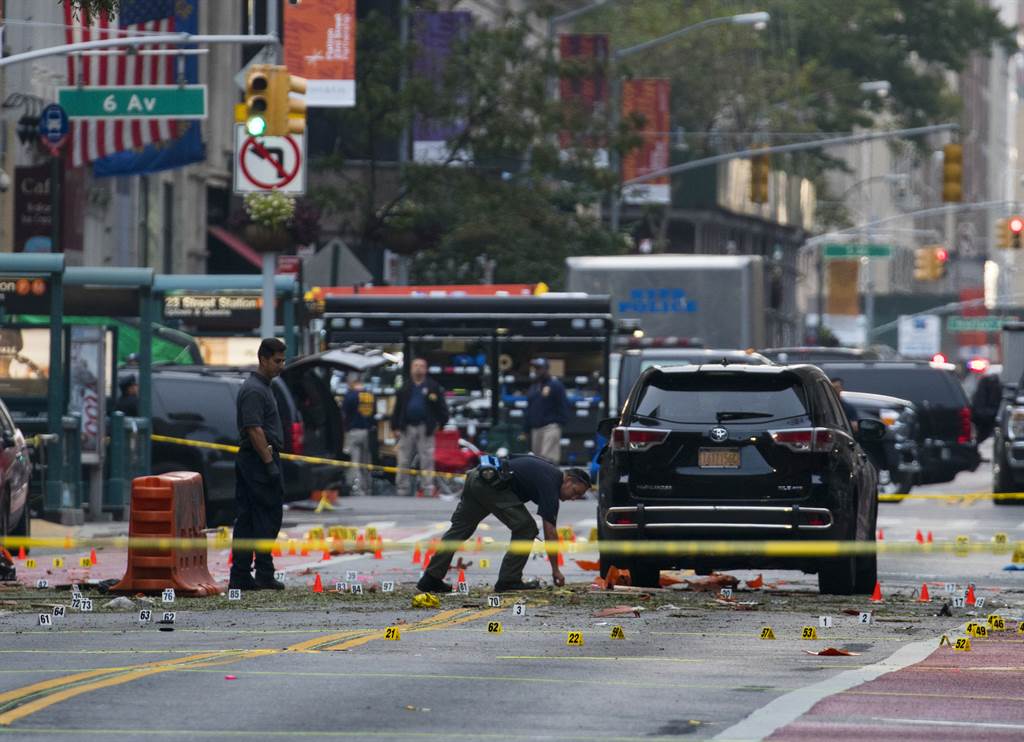 A coalition of Iranian dissident and human rights groups held a protest outside of the United Nations in advance of a speech by the Iranian regime’s president, Hassan Rouhani, who is currently wrapping up a tour of countries that have all been hostile to the U.S.

The anticipated speech by Rouhani comes at a precarious time in the tri-state area, which is recovering from bomb attacks in New York and New Jersey allegedly committed by Ahmad Khan Rahami, an Afghan immigrant who was captured after being wounded in a shootout with police.

Coupled with the stabbing attack at a Minnesota shopping mall by a man who was claimed by ISIS as a “soldier of the Islamic State,” these attacks have reminded the U.S. and the world of the ever present danger of radicalized individuals, lured by the seductive siren call of Islamic extremism.

These attacks have left nearly 40 people injured, fortunately none were killed, but in light of the growing list of terror-related attacks stretching from Boston to San Bernardino to Chattanooga to Dallas and to Orlando, it is clear that the U.S. is being subjected to the kind of waves of attacks that have become commonplace in the Middle East and increasingly in Europe.

What is becomingly increasingly clear is that radicalization of these new wave of would-be terrorists is coming rapidly through the easy access of materials online and the propaganda efforts of regimes such as ISIS and Iran to make their radical messages appealing to disaffected young people.

The protest takes a stand against the long running support of terrorism by the Iranian regime and its cruel indifference for human rights both at home and abroad. According to the Organization of Iranian American Communities (OIAC), the demonstrators called for a halt in Tehran’s extensive funding and sponsoring of terrorism in the region and demanded a halt in the executions in Iran, and urge the prosecution of the regime’s leaders.

According to the National Council of Resistance of Iran, the Iranian people have been the main domestic victims of the Iranian regime’s political violence. More than 2,500 have been hanged during Rouhani’s tenure, including dozens of dissidents, women, minors, ethnic and religious minorities.

The Hon. Joe Lieberman, former Senator from Connecticut, Pastor Saeed Abedini, recently released from prison in Iran, and Sir Geoffrey Robertson, QC, President of the UN Special Court for Sierra Leone, were among the speakers alongside young Iranian-Americans.

Rouhani has been on a tour of some countries prior to his arrival in New York this week, including a meeting with Raul Castro in Havana. His stopover in Cuba came after a meeting of only a dozen heads of state of the 120-nation Non-Aligned Movement on the Caribbean island of Margarita off Venezuela’s coast. The meeting was a who’s who of some of the world’s most unpopular leaders including Venezuela’s Nicolas Maduro, Zimbabwe’s Robert Mugabe and Rouhani.

Syria’s ambassador to the United Nations, Bashar Ja’afari, used the forum to denounce U.S.-led air strikes he said had killed 83 Syrian soldiers, saying they were aimed at sinking a fragile U.S.-Russia ceasefire plan.

About the only dictators missing were North Korea’s leader and Syria’s Assad himself.

Far from burnishing his foreign policy credentials, Rouhani’s trip only highlights the isolation of the Iranian regime and inability to build any kind of legitimate diplomatic support; especially in light of worsening human rights moves by the regime and increased confrontations in the Persian Gulf.

Sadra Mohaqeq, a journalist with Iran’s reformist Sharq daily, was arrested in Tehran this week with no explanation by regime officials. Mohaqeq was also arrested in 2013 in a crackdown on media.

The semi-official Mehr news agency reported that Mohaqeq was arrested by a “security body.”

In April, four journalists arrested in November 2015 were sentenced to between five and 10 years in prison for “colluding” with foreign governments and acting against “national security”.

Media watchdogs say journalists in Iran have to work in a climate of fear and censorship.

In another example of how the regime cares little about world opinion, it also announced the sentencing of Nizar Zakka, a Lebanese citizen and U.S. permanent resident, to 10 years in prison as part of a wide crackdown on those with any foreign ties. Zakka advocates for Internet freedom and whose nonprofit group did work for the U.S. government.

A statement early Tuesday from Jason Poblete, a U.S. lawyer representing Zakka, said a Revolutionary Court in Tehran handed down the sentence in a 60-page verdict that Zakka’s supporters have yet to see. Amnesty International has said Zakka had only two court hearings before the ruling and received only limited legal assistance before the court, a closed-door tribunal which handles cases involving alleged attempts to overthrow the government.

Other known to have been detained in Iran since the nuclear deal include:

— Homa Hoodfar , an Iranian-Canadian woman who is a retired professor at Montreal’s Concordia University;

— Siamak Namazi , an Iranian-American businessman who has advocated for closer ties between the two countries and whose father is also held in Tehran;

— Baquer Namazi, a former Iranian and U.N. official in his 80s who is the father of Siamak;

— Robin Shahini , an Iranian-American detained while visiting family who previously had made online comments criticizing Iran’s human rights record; and

— Nazanin Zaghari-Ratcliffe , a British-Iranian woman sentenced to five years in prison on allegations of planning the “soft toppling” of Iran’s government while traveling with her young daughter.

Obviously it is not a priority of Rouhani’s to release any of these people, but only to hob nob with dictators. The world should listen to his speech at the UN with a critical ear.