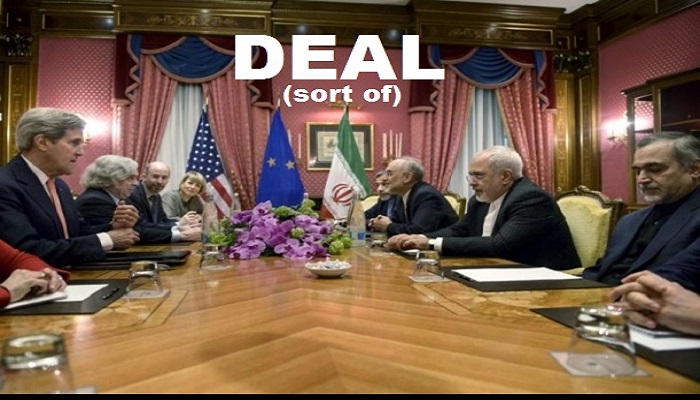 There was much fanfare and speech making in Switzerland as negotiators proclaimed a framework deal had been reached with the Iranian regime. All that remained were the “technical details.” On closer examination, a more appropriate paraphrase might be “same stuff, different day.”

As predicted here, this framework deal is nothing more than a stalling tactic to allow all parties to claim a victory without really putting anything on the line and buy time to go back to the bargaining table again until the June 2015 deadline.

The key world that President Obama and regime officials such as mullah’s Foreign Minister Javad Zarif and even regime apologist-in-chief Trita Parsi of the National Iranian American Council all agree on and used in their respective statements was “If.”

If the details can be worked out. If the Iranian regime can be trusted to implement it. If inspectors are allowed unfettered access. If Iran doesn’t cheat. Never in the annals of diplomacy has the word “If” been used so often by so many people to describe such dramatically different viewpoints.

But critics of the so-called agreement, including Iranian dissidents closest to the reality on the ground, all chimed in and for them, no one was using the word “If.” For them, the reality of the Iran regime’s past history and track record led most of them to abandon any doubts and solidly believe the regime has no intention of honoring this agreement.

In the following weeks there will be plenty of commentary, detailed analysis and criticism of this proposal and the vague loopholes in it large enough to drive a battleship through, but what is worth reflection now is how we got here.

The one essential truth is that punishing economic sanctions, coupled with a revolution in oil production driving down global oil prices brought the Iranian regime to its knees and put its ruling mullahs right in the cross hairs of the same kind of discontent among Iran’s people that drove the last revolution.

The fragile hold the mullahs have was shown to be tenuous even as they ratcheted up the crackdowns at home and proxy wars abroad in an effort to suppress dissent and provide distractions for the world to take attention away from how precarious their hold on power can be.

Since 2002, sanctions and their effectiveness at bringing the regime back to the bargaining table again and again are undisputed. The regime has worked long and hard to create perceptions of Iran’s rise as a regional power a force to be reckoned with. It is a charade and illusion that has helped its cause at the bargaining table by forcing some nervous Western diplomats to capitulate to Iranian demands in a blatant effort of appeasement all too reminiscent of British Prime Minister Neville Chamberlain’s notorious “Peace in our time” boast.

As Mrs. Maryam Rajavi, the head of the National Council of Resistance of Iran and the leading opposition group to the Iranian regime, said: “Nevertheless, a statement of generalities, lacking Khamenei’s signature and official approval, will never block the path to the regime obtaining nuclear weapons nor prevent its intrinsic deception.”

Which brings us to the last and most crucial point about this agreement, which is it is not an agreement unless Iran’s top cleric says so and given his most recent statements he might be smelling blood in the water to the extent the West has caved on many regime demands. Would Khamenei tank this framework in order to make another stab at getting everything he wants which is namely an immediate and complete lifting of all economic sanctions against Iran?

Khamenei knows that the secret to preserving the mullahs’ power is to lift the sanctions to demonstrate that the mullahs can do more than arrest, beat, torture and hang people.

It stands to reason though that with all of the “ifs” involved in this framework, we’re likely to be hashing out the same issues again in just a few more months.