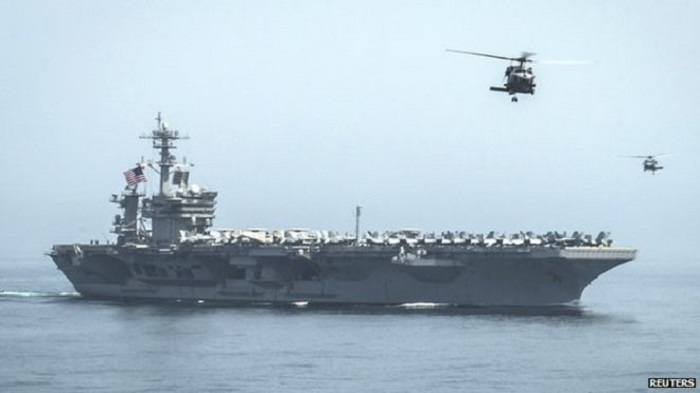 A curious thing happened the other day. A nine-ship Iranian convoy believed to be filled with weapons bound for Houthi rebels in Yemen turned around after being followed by U.S. warships stationed in the area to prevent covert arms shipments. The convoy of seven freighters and two military frigates turned back to Iranian waters after nine U.S. Navy vessels set a parallel course alongside to monitor them.

Why is this significant? Because it represented one of the few opportunities lately where a direct response to a potential Iran regime violation of international agreements led to the mullahs backing down. Prior to this, the regime had aggressively flouted international agreements by funding Syrian president Bashar al-Assad after his forces used chemical weapons, supplied terror groups and Shiite militias in Iraq and Lebanon targeting Christians, Sunni Muslims, political dissidents, and engaging in a secret and rapid build-up in its nuclear enrichment program; all of which were acts done without a strong, determined international response.

In fact, Iran’s mullahs have long gambled on international passiveness to make their gains in proxy wars, territory or concessions in nuclear talks. It is a strategy built on the idea that if you cause enough chaos, people will look to anyone who might offer some solution – even the people who started the problems in the first place.

Historians have long called this policy by another name: “appeasement.” It’s a term filled with notoriety, especially after the failed effort by Western allies to sway Nazi Germany’s Adolf Hitler from his path to war by offering up parts of annexed countries like so many pork chops.

This policy of appeasement has never proven to work, yet diplomats consistently go back to it over and over again and use different names to describe it: “rapprochement,” “dialogue,” or “engagement.” In each case, it is another form of appeasement and does nothing to sway bullies, thugs or tyrants, instead encouraging them.

To use the analogy, it’s like giving a predator pieces of red meat in the hopes it doesn’t eat you. Eventually you get eaten as well since all you’ve done is stoke the hunger and identified yourself as being part of the food chain.

Iran’s mullahs have been emboldened by the weak response by the international community to its efforts to take over its neighbors and spread its form of extremist ideology. Boko Haram’s mass killings and kidnappings in Nigeria is met with hashtag slogans. Iraq’s exclusion of Sunni coalition partners is met with diplomatic shrugs. Even Yemen’s quick collapse elicited scant reactions until Saudi Arabia finally raised the alarm and put together an Arab coalition and started responding.

It is beyond mere coincidence that the Arab air campaign was suspended the day the U.S. nuclear aircraft carrier Theodore Roosevelt and her battle group were moved into the Gulf of Aden. It is also no coincidence that Iran turned back its arms convoy because the mullahs have correctly calculated they could not push their luck.

This reveals the key weakness of the mullahs ruling Iran which is when push comes to shove, they are not willing to push back. Iranian regime lacks the military capability for a traditional and modern military, having diverted funding to terror groups and lining the pockets of regime elites and their families.

After going all in with deep investment in its nuclear program, coupled with crippling economic sanctions and dropping oil prices, Iran’s mullahs now find their military capabilities to be severely limited. This was shown nowhere else more clearly than in the failed offensive mounted by Iranian-backed Shiite militias in Iraq who failed to take Tikrit and instead had to rely on U.S. airpower to help Iraqi forces take the city and save the effort.

A humbling moment and one that crystalized one key fact: when confronted by strong, unified action, the mullahs will back down. It’s a wonder why the same approach has not been used in nuclear talks instead of waving the white flag and giving into to whatever the mullahs want.

Fortunately, Democrats and Republicans in Congress have recognized this weakness of the mullahs and have decided to stand strong in voting for a voice in the nuclear talks through the Corker-Menendez bill and send a strong signal to the mullahs that the days of appeasement may finally be over.