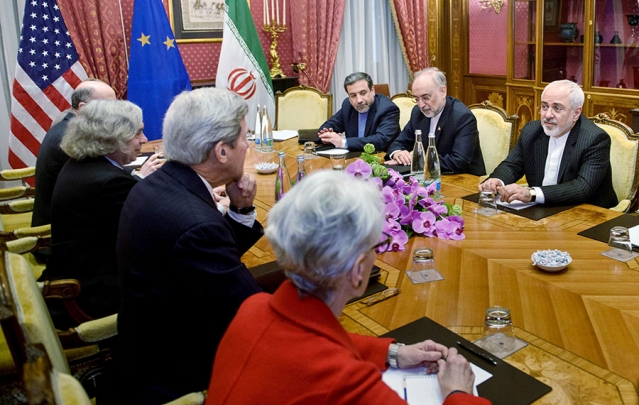 With only a week left before the June 30 deadline for an agreement between the P5+1 group of nations and the Iran regime, the Iran lobby is working overtime spitting out editorials, policy papers and other propaganda stressing the same messages it has been hammering on for three years.

This was no more evident than in a piece published in Foreign Policy by Trita Parsi, head of the regime’s chief cheerleader the National Iranian American Council, who trotted out the old standard that the only choices at the bargaining table was between war and peace; claiming that this dispute was “rarely resolved through diplomacy without the various sides going to war first.”

Of course that is a false choice and a weak scare tactic because the choices are much more varied and numerous than Parsi would have us believe. In fact, the National Council of Resistance of Iran, the largest Iranian dissident groups in the world, held a press conference today where they released a report outlining the laundry list of same deceptions and falsehoods Parsi has been flogging.

Alireza Jafarzadeh, the NCRI-US deputy director, outlined some of these other choices for negotiators and chief among them was the potential for regime change itself within the Iran regime which has been wracked by large scale demonstrations across the country by disgruntled teachers and workers who are fed up with large-scale corruption and the diversion of the nation’s wealth away from the economy and to fund terror groups and proxy wars in places such as Syria, Iraq and Yemen.

It certainly did not help that the mullahs decided to fortify a faltering Assad government in Syria with an additional 15,000 troops, comprised heavily of paid mercenaries from Iraq and Afghanistan.

And this is what Parsi attempts to misled with his editorial. While he claims the choices are stark between war and peace, he neglects to mention that Iran mullahs are already at war with Saudi Arabia in Yemen, Sunnis tribes in Iraq and the Syrian people who are standing up against he dictatorship ruling the country. The regime’s Revolutionary Guards and Quds Force are already fighting on battlefields throughout the Middle East.

And this even isn’t a recent development. Iranian regime’s military has long supplied local militias in Iraq in their fight against U.S. and coalition forces, including training in constructing improvised explosive devices, LEDs, which have claimed thousands of American lives.

“What does this mean? It means that Iran doesn’t seem particularly interested in entering into a dialogue with the Obama Administration at the moment,” wrote Jeffrey Goldberg in the Atlantic in 2011.

All of which puts the lie to Parsi’s chief argument since Iran’s mullahs have already been waging war against U.S. interests and personnel for the past five years. This brings us to another of Parsi’s ham-handed arguments, namely that a deal represents a watershed moment in the relationship between Iran and the U.S. and would make Iran more amenable to working with the U.S.

Another silly proposition since Iran’s mullahs have shown a shocking willingness to turn American hostages into bargaining pawns and demanded – and received – the exclusion of human rights and ballistic missile technology from any part of the negotiations.

The NCRI report clearly showed this by delving deeply into how Tehran has approached nuclear talks by consistently keeping military sites out of inspections, foot dragging requests for disclosure by the International Atomic Energy Agency, retaining its nuclear infrastructure in its entirety including its centrifuges, uranium stockpiles and heavy water reactors, and keeping talks alive after three years with false promises and interim agreements, leaving it free to pursue its military actions abroad.