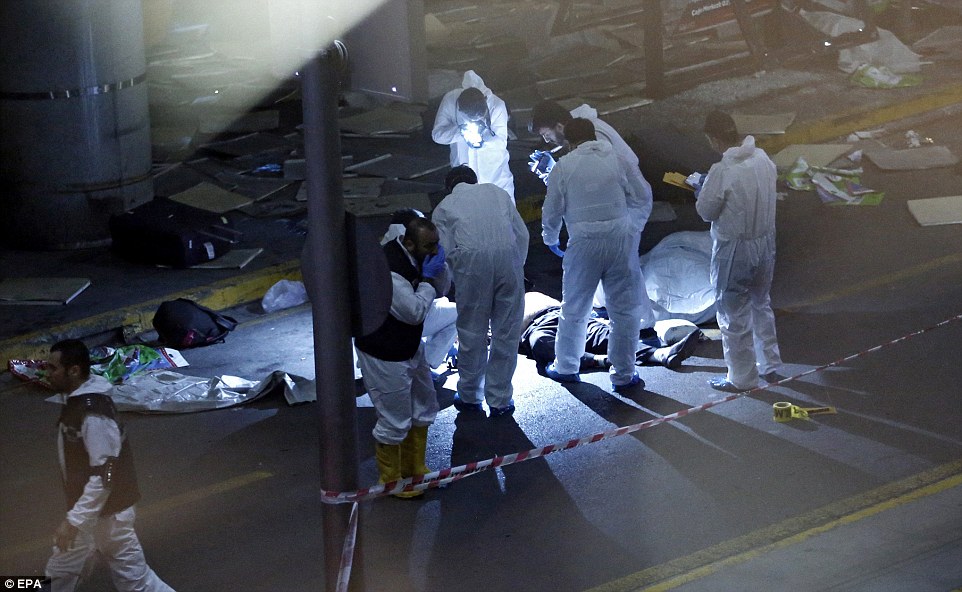 Terrorism Strikes in Turkey and Iran Regime Runs Away

Terror struck another airport again, this time in Turkey, with devastating loss of life. The world was quick to label it terrorism and it brought back fresh memories of similar attacks in Paris and Brussels as suicide bombers fired assault rifles at passengers and then exploded vests.

While no terror group has claimed responsibility so far, suspicion by Turkish officials naturally fell on ISIS which operates extensively along the border with Syria and Iraq. If this attack was perpetrated by the Islamic State, it opens up a widening front in its efforts to destabilize Turkey, which has already suffered steep drops in tourism; a vital component of its economy.

What is worrisome is the larger global trend towards rising violence from radicalized Islamists, either operating directly under the control of terrorist leadership as in Paris, or being self-radicalized as in San Bernardino and Orlando.

The response from many countries to these escalating attacks has been to call for stepped up attacks on ISIS in Syria and Iraq, as witnessed by Wednesday’s attack of an ISIS column leaving Falluja in Iraq by U.S.-led aircraft, or call for a hardening of potential soft targets at home.

What none of these suggestions deal with is the source of this rise in terror from extremist Islamic groups, which is the Iranian regime. Iran and its mullahs sit at the center of the sectarian violence wracking the region.

It was Iranian regime’s intervention in Syria to save the Assad regime that helped to spawn ISIS in the first place. It was Iran that provided safe haven for many of the leaders of Al-Qaeda forced out of Iraq and Afghanistan by the U.S.-led invasions, only to see them go back to fight in Iraq and Syria.

It was Iran that forced the government of former Iraqi prime minister Nouri al-Maliki to force his Sunni coalition partners out of the government, leading to the schism that resulted in the quick fall of Mosul and most of northeastern Iraq to ISIS, giving the terror group its big boost in territory, cash and oil wells.

Predictably, while the rest of the world expressed shock, outrage and sympathy over the attacks in Istanbul, the response by the Iranian regime was understandably muted.

Bahram Ghasemi, newly-appointed spokesperson for the regime’s foreign ministry, officially reacted to the blast when he offered condolences and sympathy to the bereaved families of the victims and Turkish government in state-run media.

“As Foreign Minister Zarif had frequently stated, there is a systematic lack of international resolve to address the vicious phenomenon; extremism and terrorism would not be limited to political and geographical borders,” he said.

There were no similar sentiments expressed by regime leaders such as Ali Khamenei or Hassan Rouhani.

The two-faced nature of the Iranian regime when it comes to condemning acts of terror was highlighted in an editorial by Tom Ridge, former secretary of homeland security, in the Washington Times, in which he took the regime to task for its expressions of sympathy following the mass shooting at the Pulse nightclub in Orlando.

“It’s hard to imagine an expression of sympathy more disingenuous. Tehran’s comments must be viewed against a backdrop of its status as the world’s most active state sponsor of terrorism, its steady propaganda against the United States, and its own brand of homophobia that has its origins in Islamic extremism,” he said.

“Iran is not all talk. The rhetoric about Western ‘arrogance’ and ‘hostility’ has been backed up by the arrests of numerous people who hold both Iranian and Western citizenships. The same goes for journalists, artists and professionals who have any meaningful connections with the West, and for activists the regime deems pro-Western,” he added.

This disconnect between the lip service Iran pays to acts of terror, while fully committing itself to supporting and funding it lies at the heart of the problem with the approach the U.S. and European Union have taken to Iran since the nuclear agreement was reached last year.

You cannot hold a state sponsor of terror such as Iran accountable when you are rushing to do business deals to enrich it. It is dangerous and will eventually lead to only more acts of terror and more chaos across the world.

The rise is terror is only matched by the abhorrent level of human rights abuses being committed by the Iranian regime as well.

Perviz Khazaii, former Ambassador of Iran in Sweden and Norway and the representative of the National Council of Resistance of Iran in Nordic countries, penned an editorial in The Diplomat highlighting these abuses.

“Violent punishments are not confined to Iran’s prisons, either. For instance, in October 2014, gangs affiliated with the regime carried out acid attacks on at least 25 Iranian women and girls who were regarded as being improperly veiled or otherwise in violation of religious norms,” he said.

“This sort of enforcement of the regime’s ruling ideology has also motivated a massive, ongoing crackdown on activists, writers, bloggers, and artists. This has helped Iran to secure its title as the largest jailer of journalists in the Middle East,” he added. “In short, the human rights situation is deteriorating at a fast pace.”

“Tehran’s most frequent foreign-policy blind spot remains underestimating the degree to which its aggressive regional activities spur sectarian and ethnic backlash. If it can avoid triggering further Sunni radicalization, an internal Shia civil war, and the potential breakup of the country, however, the Islamic Republic is likely in good shape to continue its ‘Iranianization’ of Iraqi security and political structures,” McInnis writes.

The world should stop enabling the regime and hold it accountable for the spread of  terrors motivated by Islamic extremism.