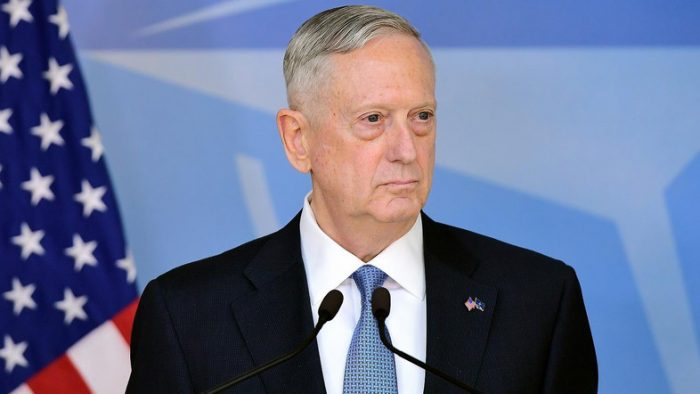 US Defence Minister James Mattis addresses the press during a NATO defence ministers’ meetings at the NATO headquarters in Brussels on February 15, 2017. / AFP PHOTO / EMMANUEL DUNAND

Consistency of thought has never been the strong suit for members of the Iran lobby such as the National Iranian American Council. Often staffers from the NIAC write editorials that passionately argue to right some perceived wrong being perpetrated by the U.S. government, while at the same time ignoring the exact same violation being committed by the Iranian regime.

Take for example the issue of detention of Iranians within the U.S. under the Trump administration’s new immigration rules versus the long-running policy of the mullahs in Tehran of snatching up and imprisoning dual-national citizens.

The NIAC issued a statement by Ryan Costello arguing against the arrest of an Iranian citizen holding a U.S. visa in Michigan. According to the statement, the “news comes amidst an uptick in government harassment of visa holders and citizens entering the U.S. We are concerned this is further evidence of a discriminatory culture being promoted by Donald Trump and his administration, particularly towards people of Middle Eastern descent.”

While the attention to this case seems to be the primary focus of the NIAC, the notorious supporters of the Iranian regime are virtually silent on the same practice by the mullahs in arresting dual-nationals such as Iranian-Americans on bogus or secret charges and held in deplorable conditions.

Consider the long-running saga of British charity worker Nazanin Zaghari-Ratcliffe who was arrested at Tehran Airport on April 3 last year while visiting family with daughter Gabriella.

She was imprisoned for five years in September for allegedly plotting to topple the Iranian government and lost an appeal against her sentence in January but maintains her innocence.

On Sunday – the 365th day since the arrest – family and friends gathered at Fortune Green close to Zaghari-Ratcliffe’s home in north-west London according to the Standard.

Supporters tied yellow ribbons to a tree in the park along with quotes from inmates at Evin prison in Iran, where Zaghari-Ratcliffe is being held, describing what they would do with one day of freedom.

Her painful and heartfelt wish reads: “My fondest dream has always been to arrive at our home, you ask me if I want to have a cup of tea, then make me one.”

“I just sit back and watch you two play. This is the image I had most when in solitary confinement.

“How I wish I could watch you both dance in the middle of our sitting room to the Michael Jackson music – like when Gabriella was only tiny.”

The NIAC makes no mention of her incarceration, not even a plea for humanitarian release because of her sharply declining health and denial of adequate medical care. Why the double standard?

One of the more stunning double standards was an editorial in the Atlantic Council by NIAC’s Adam Weinstein which argued why Iran views its ballistic missile program as a “red line” that warrants full protection by the mullahs.

He predictably recounts the same old arguments from Iran’s experiences in the Iran-Iraq War in which Saddam Hussein showered Iranian troops with missile barrages and how the mullahs in Tehran vowed to develop their own missile capability to defend themselves in the future, especially as a deterrent from perceived enemies such as the U.S. and Saudis.

Weinstein argues—incredibly—that alleviating Iran’s sense of vulnerability might be a better way to approach Iran.

Using his logic, if your neighbor has decided to arm himself and occasionally takes shots at you, Weinstein argues that you should be the one of reassure your violent neighbor, not the other way around?!

Weinstein even stretches his bizarre logic by trying to tie into a historically revisionist view of Shi’ism portraying it as choosing pragmatism over ideology.

Not many Syrians or Yemen civilians being subjected to Iranian bombs, mortars, rockets, drones and militia would find any proof of that sentiment.

What Weinstein never discusses though is the rapid development of Iran’s missile program in creating and testing ever more powerful boosters designed to reach intercontinental distances and lift capability approaching via nuclear payload capabilities.

Why Iran needs a ballistic missile with the range to reach into New Delhi or Rome is never mentioned by Weinstein because there is no reason other than to hold a dagger over Europe, Asia and the rest of the Middle East like the sword of Damocles.

But that double standard is nothing new to the Iranian regime as Iran’s Foreign Ministry called on the United States to pressure its regional allies into abandoning their support for terrorism and not level “malicious” allegations against the Islamic state.

Asked about comments Mattis made in 2012 that the three primary threats the United States faced were “Iran, Iran, Iran,” Mattis told reporters in London on Friday that Iranian regime’s behavior had not changed in the years since.