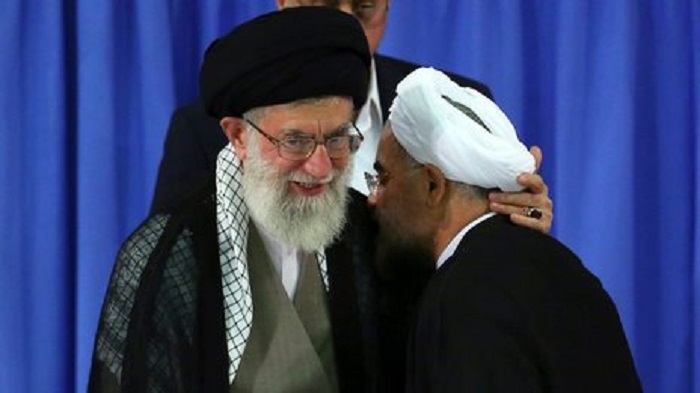 Our old friends at the National Iranian American Council put out an interesting opinion piece claiming an undivided Iranian regime leadership when it came to matters of national policy, especially the prospects of a nuclear deal with the P5+1. Authored by well-known regime apologist Reza Marashi, the piece posits the idea that the regime’s top leaders, Ali Khamenei and Hassan Rouhani, wanted to rifts between the two.

It’s an odd statement to make considering Rouhani was Khamenei’s handpicked choice for the job in a ballot cleansed of all other potential opponents in a nation whose prior elections were widely regarded by international observers as rigged. In a strictly controlled society where the religious edicts of the mullahs in charge carry supreme weight and dissident is harshly and swiftly punished by arrest, imprisonment and execution, the idea of dissent of any kind is laughable.

As the saying goes, no puppet moves without a puppet master and every action taken in Iran has a sanctioned purpose by the ruling religious cadres. In fact, if we compare other totalitarian regimes throughout history, it is clear the one facet they all share is an ability to project a united front no matter what is happening behind closed doors.

Outside observers have long been relegated to tea leaf reading of close examinations of photos at ceremonial events to see which leader in waiting was standing next to whom. Iran’s regime is no different where every opinion by an outside analyst is usually confounded by a system wholly devoted to its own peculiar inner workings of dogma.

What I find most interesting is the stretch of imagination Marashi takes in hinting that the reign of former President Mahmoud Ahmadinejad was in some way the work of an eccentric mad man and not representative of the Islamic state. He forgets to mention Ahmadinejad’s election was fixed so he was clearly the regime’s man and his re-election indicated Iran’s mullahs were all in with the idea of showing the West an iron fist of determination.

When that approach failed to yield any benefits and only convinced the rest of the world that Iran’s leadership was delusional, the mullahs huddled and changed tack by offering a perceived more moderate face in Rouhani who has a smiling face busy with selfies, tweets and Facebook posts.

By the Iranian regime’s true intentions remain solidly rooted in the hardline extremism exhibited through its near fanatical support of terror groups and the spread of extreme Islamic groups worldwide, as well as the even harsher crackdown at home on political dissent. It has been left up to the Marashi, Trita Parsi, Tyler Cullis and others of the world to build the perception of an Iran united behind the idea of peace and moderation.

Incidentally, the irony of the Iranian military undertaking exercises this week and blowing up a replica of an American aircraft carrier is just reaffirmation of Iranian regime’s near schizophrenic approach to displaying to the world its eagerness for a deal, but determination to continue fighting “The Great Satan.”

The one correct truth Marashi does say is the Iranian regime’s efforts to shift the onus of any deal onto the U.S. and away from Iran. Iran’s lobbying machine has ramped to a fever pitch in advance of the March 24th deadline to find any excuse other than the Iranian regime’s extremist views as a reason talks may fail for yet a third time.

The real truth of Iran’s united front is that it is a front united solidly behind the effort to preserve the regime’s ability to build a nuclear weapon.