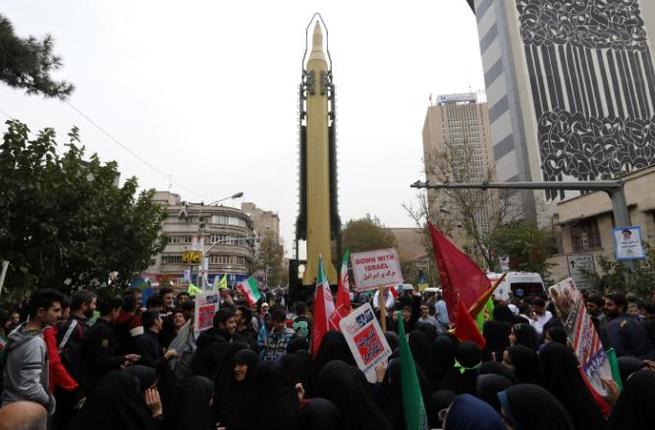 The Importance of the Hate Machine to Iran

Ever since the Iranian revolution that deposed the Shah and installed an Islamic theocracy in Tehran, the ruling mullahs have invested heavily in a state-supported hate machine designed to gin up fierce hatred of the U.S., which typically reaches a crescendo on the anniversary of the 1979 U.S. Embassy takeover.

Last Saturday marked the latest iteration of a heavily choreographed spectacle designed to communicate Iranian hatred of the U.S., but also to divert the attention of the Iranian people away from the ever-growing mountain of problems they are struggling with under the mullahs’ rule and towards a perceived common enemy.

For the last nearly four decades, the mullahs have used the anniversary as the culmination of weekly and monthly demonstrations that include the now ritual “Death to America” chants and the parades across painted American flags and posters plastered on city walls mocking American political leaders.

The protests and observances have taken a different tone and edge over the years though; ceasing to be filled with vitriol by the Iranian people and carry more of a resigned air matched only by skies increasingly polluted by lack of regard by the mullahs for the environment or the health of the Iranian people.

For the mullahs these events commemorate a rare victory when hundreds of extremist regime related militant students (The very same militants that later formed the “Islamic Revolutionary Guards Corps”, IRGC) took 52 Americans hostage for 444 days in an event that helped cement the mullahs in power as they used the event for its propaganda value to legitimize the theocratic state they wanted to build; thereby stealing the promise of democracy ordinary Iranians had hoped for after the downfall of the Shah.

The mullahs learned from that singular event which is why they have carefully crafted a government built on a state-driven hate machine that attacks not only the U.S., but also other enemies such as the Sunni Arab nations such as Saudi Arabia, as well as perceived enemies from within like the Iranian resistance movement.

That machine is comprised of state-controlled media encompassing newspapers, television networks, bloggers, social media and pretty much every other avenue of communication within the regime.

It is backed by the thuggery of the Islamic Revolutionary Guard Corps and the paramilitaries that enforce the dreaded “morals codes” that oppress the Iranian people. Together with the Islamic religious courts and police, they work in concert to tightly orchestrate these observances and ensure obedience from the Iranian people.

In this aspect, the Iranian regime acts like a mirror image of the cultish North Korean dictatorship that forces citizens there to treat their leader as a deified entity.

While top mullah Ali Khamenei may not aspire to godhood, he certainly relishes having his wishes obeyed as if he was one.

To reinforce the militant aspects of this year’s anniversary celebrations, the Iranian regime’s military rolled out a surface-to-surface Sejjil ballistic missile with a range of 1,200 miles in a show of force. It marks the first time the regime has displayed this particular missile and comes shortly after President Donald Trump moved to decertify the Iranian regime under the current nuclear deal, partly because of the regime’s accelerated missile program.

The Fars news agency posted pictures of demonstrators burning an effigy of Trump and holding up signs saying “Death to America,” Reuters reported.

A statement read out at Saturday’s protest said Iranians “see the criminal America as their main enemy and condemn the denigrating remarks of the hated US president against the great Iranian people and the Revolutionary Guards.”

Khamenei speaking to the regime supporters urged them to never forget that “America is the enemy”. “To give in to the Americans makes them more aggressive and insolent. The only solution is to resist,” he said.

Ali Shamkhani, former chief commander of IRGC and current secretary of the regime’s Supreme National Security Council, addressed the crowd, saying Iran will make any sanctions imposed by the U.S. “ineffective” even as the U.S. targets Iran’s economic, nuclear and defensive power.

Shamkhani, alluding to Trump’s threats against North Korea, said even U.S. allies know that Trump “has no power to realize his bluffs, against Iran, too.” He called the U.S. the “eternal enemy” of Iran.

The regime needs to continually turn up the volume on the hate meter to continue using force and intimidation to keep the Iranian people in line and Iran in a perpetual state of conflict. The mullahs need to generate fear as a means of control as a way for justifying their increasingly punitive decisions.

Entry into the Syrian civil war? Necessary to save the Assad regime and preserve a Shiite ally.

Fostering of another civil war in Yemen? Necessary to counter Saudi expansion.

Fast tracking a ballistic missile program? Necessary to maintain a threat to the U.S. and Israel.

Ultimately though the deepest fears of the mullahs are that the Iranian people will see past these charades and choose a different path for their futures.

The Los Angeles Times quoted one such Iranian at the anniversary observances.

“I wish the hostility between the two countries would end as soon as possible because we are suffering from it,” said Hasan Mahmoudi, a shopkeeper near the embassy. “We want to have normal relations with America and foreign investment here to create jobs for our educated youth.”

For the mullahs, nothing would be more of a threat to their rule than the desire of the Iranian people for a normal life, devoid of fear, hate and conflict, where they could live in a democracy and focus on building a better life for their children.

It’s the one future that can defeat the Iranian regime’s hate machine.