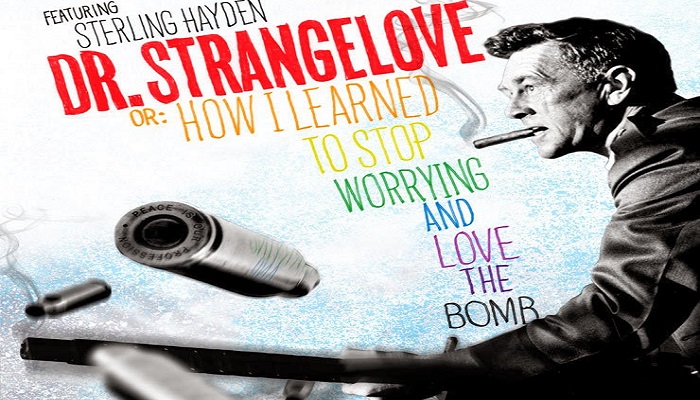 The ever faithful Iranian regime lobbying machine spit out another gem with an editorial authored by Trita Parsi and Tyler Cullis of the National Iranian American Council entitled – amusingly enough – “How Congress Can Learn to Stop Scuttling and Love the Iran Nuke Talks” that ran in Foreign Policy.

It is a startlingly similar title to the 1964 classic anti-nuclear satire film “Dr. Strangelove or; How I Learned to Stop Worrying and Love the Bomb.” The story concerns an unhinged United States Air Force general who orders a first strike nuclear attack on the Soviet Union. It follows the President of the United States, his advisers, the Joint Chiefs of Staff, and a Royal Air Force officer as they try to recall the bombers to prevent a nuclear apocalypse.

If the similarities in title and message are intentional by Parsi and Cullis, they most certainly are probably taking their cues from the film’s Gen. Jack D. Ripper character who orders the insane act in the first place based on the psychotic belief the Soviets are polluting the “bodily fluids of Americans.”

It’s a sentiment shared in spirit by Iran’s ruling mullahs, in particular Supreme Leader Ayatollah Ali Khamenei who has consistently called the West and American culture in particular a plague. This belief is usually punctuated by annual demonstrations denouncing America and the pursuit of a foreign policy aimed at destabilizing and even attacking American interests and citizens through a vast global network of terror and extremist groups funded, armed and supported by Iran’s mullahs and the Iranian Revolutionary Guards Corps and Quds Force.

In the piece authored by Parsi and Cullis, they attempt to portray a battle of Titans between President Obama and Congress over the threat of re-imposing economic sanctions on Iranian regime, should a deal fail to materialize. Most noteworthy is their attempt to frame the central key issues in being able to reach a deal around Congress’s fickleness in following through on any negotiated deal with Iran. Hence, Iran’s mullahs cannot trust any deal with the U.S. since the Congress is hell-bent on punishing the regime in Iran anyway.

They further propose the only real way to reassure the mullahs is for Congress to pass legislation removing the bulk of sanctions up front in any deal by empowering the President to do so on his own. In essence, Congress should abdicate responsibility of oversight on any deal and allow President Obama to close a deal with the mullahs in Iran as he sees fit.

The idea is problematic since Parsi and Cullis blissfully ignore the past two years of two other failed negotiating rounds. They ignore a record of dismal human rights abuses by Iran’s mullahs since “moderate” Rouhani took office. They ignore the rapid growth of not only ISIS and the marked brutality of executions videotaped for global consumption, but they also ignore the chaos now circling the globe with violent Islamist extremists on the march in Sydney, Ottawa, Paris, Copenhagen, Belgium, Syria, Iraq, Afghanistan, Lebanon, Yemen, Nigeria, Chad, Sudan and now Libya.

They ignore Iranian regime’s long involvement in supporting these groups through the steady flow of arms, training, fighters and cash. As Dana Perino, former White House press secretary for President George W. Bush, said recently on the Fox News Channel’s “The Five” that Iran is at the center of virtually all of the unrest now going on with Islamic extremism in these global hot spots.

The pair also ignored the most basic political reality for the U.S. right now and that is after landslide losses in the midterm elections, President Obama has lost his mandate from the American people who now rank terrorism above jobs and the economy as their chief concern in 2015; hardly surprising given the almost daily news coverage of executions and beheadings, including the brutal slayings of 21 Egyptian Coptic Christians in Libya and the killings in Copenhagen.

Lastly, it is also worth noting the final gaffe in the logic of Parsi and Cullis and that is opposition to Iran mullahs developing a nuclear weapon is bipartisan. The fact that Democratic Senator Richard Menendez (D-NJ) is leading the sanctions push is no accident, as are voices of concern from prominent Democrats such as Senators Dianne Feinstein (D-CA), Chuck Schumer (D-NY), Bob Casey (D-PA), Joe Manchin (D-WV) and several others who have warned President Obama not to enter into any deal without review and approval by the Senate.

All of which adds up to one question, will the third round of negotiations buy the charm? Judging by the Iranian regime’s decisions to go all in on supporting terror groups and Islamist extremist groups around the world and double down on an even more brutal crackdown on political dissent at home, it seems Iran’s mullahs have calculated the West and President Obama needs a deal more than they do. In fact, Khamenei has already openly opined by the Iranian people’s ability to withstand even harsher sanctions in the hopes of pushing their expansionist agenda.

By March 24th, the world is liable to see that Iranian regime is indeed committed and its mullahs are true believers in their mission to spread their extremism around the world no matter the cost.