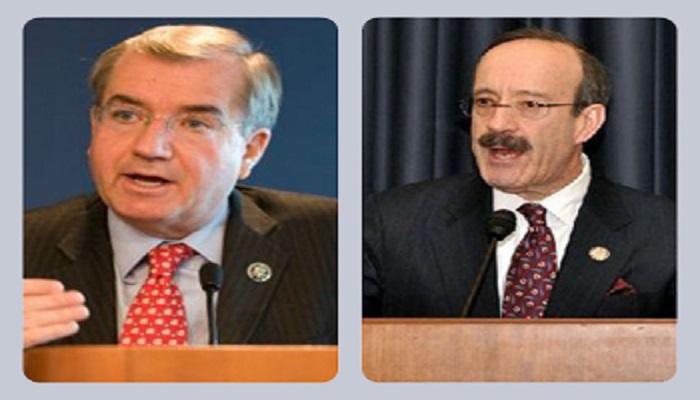 A veto-proof, bipartisan majority of House lawmakers signed an open letter to President Barack Obama yesterday warning him that any agreement reached with the Iranian regime on its nuclear weapons program will require congressional approval for implementation.

While the Senate has begun considering bipartisan legislation mandating review of any agreement by Congress, the House letter outlined another possible venue for halting an agreement by refusing to roll back any sanctions levied on Iran.

The letter, signed by 367 members of the House represented a large bipartisan swath of both sides of the political aisle, putting efforts by the Iranian lobby working hard to forestall any such congressional action as fruitless so far.

‘Should an agreement with the regime in Iran be reached, permanent sanctions relief from congressionally-mandated sanctions would require new legislation. In reviewing such an agreement, Congress must be convinced that its terms foreclose any pathway to a bomb, and only then will Congress be able to consider permanent sanctions relief,” members wrote in the letter which was led by Foreign Affairs Committee Chairman Ed Royce (R-CA) and ranking member Eliot Engel (D-NY).

The House letter follows a letter sent by 47 Republican Senators to the Iranian regime and precedes what will likely be Senate action after the recess where Senate Foreign Relations Committee Chairman Bob Corker (R-TN) announced on Friday he would schedule a committee vote April 14 on a bill that would allow Congress 60 days to review any deal before its implementation.

The momentum for congressional review and approval continues to grow as the situation in the Middle East continues to deteriorate rapidly, largely because of the Iranian regime’s manipulations and involvement.

Yemen, which had been held up as a showcase in the fight against terror by the Obama administration six months ago, has collapsed with the U.S. embassy closing and all U.S. Special Forces being hastily withdrawn as Iranian-backed Houthi rebel extremists swiftly took over the government. Yemen, which shares a border with Iranian regime foe Saudi Arabia, now appears headed towards a Syria-like civil war.

Meanwhile, Iran’s Quds Force and other Revolutionary Guard Corps units have effectively taken over Iraq and are busy entrenching Shiite militias, supplanting Iraqi army units in the war with ISIS.

The situation with ISIS grows more anxious as Boko Haram and other extremist groups pledge their allegiance and enable the terror group to expand its reach into Libya, Tunisia, Nigeria, Chad, Sudan, Afghanistan and even into Turkey.
All of which has rightly caused Democrat and Republican lawmakers to worry about where the P5+1 negotiations are going. Not helping has been the veritable cloak of secrecy that have covered these talks and failed to win any confidence from the American public faced with growing fears of terrorism and an Iranian regime seemingly with a finger in every terror pie around the world.

In the face of all this, the Iranian lobby, led by the National Iranian American Council, has failed to make much of an appreciable dent. It’s only ally, and arguably its most important, seems to be an Obama administration bent on grasping onto any deal in order to trumpet a foreign policy win amidst a dearth of good news from around the world.