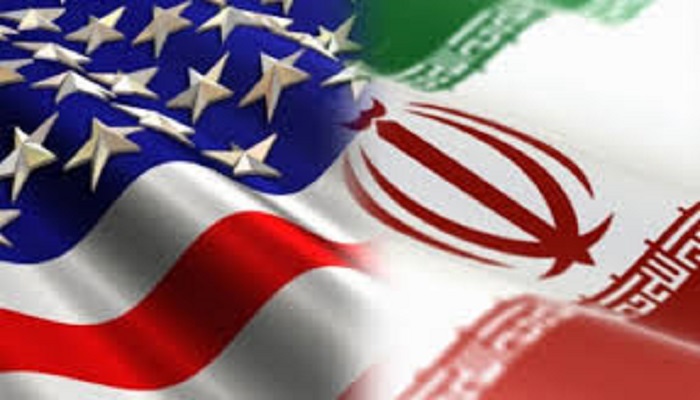 “Dedicated to Improving the Relationship Between the U.S. and Iranian Governments”

The Iran Project, a pro-Iranian regime organization in the US comprised mainly of former government officials and academics, released a report in August 2014 that offers potential foreign policy consequences if the US concludes a nuclear agreement with Iran.

That a viable agreement can be reached is far from certain and releasing the report beforehand would appear to be propaganda ploy to promote an agreement rather than a serious examination of foreign policy issues.

The original deadline to conclude a comprehensive nuclear agreement was July 20, 2014.  It was extended four months due to “substantial differences” and there is already discussion to further stretch out the timetable.

Other than a small spattering of negative comments, the report presents a benign view of the Iran regime.  The authors acknowledge Iran is an “international pariah” and has “ties with at least seven terrorist groups.”  They raise the issue of Iran’s miserable human rights record but then decline to address these issues in the report.

Over 1000 people executed During Rouhani’s first year in office.

The authors fail to mention anything about the regime’s repressive government, public hangings, crackdown on free speech, and political persecutions.

The report falsely asserts that Iran has “largely abandoned attempts in the 1990s to export its revolution to the Gulf.”  This is surely seen different by the international community, among which the Saudi Foreign Minister Saud al-Faisal, who recently demanded Iran’s mullahs withdraw their “occupying forces” from Syria, Iraq and Yemen.   He said Iran was not part of a solution in these areas, but the problem.

The report calls attention to “Afghanistan’s “nascent democracy” and claims Iran “was helpful to the United states in inserting provisions for democracy, elections, and anti-terrorism into the Afghan Constitution.”  Not discussed is the regime’s assistance to al Qaeda, helping them escape from Afghanistan and letting them set up a “management council” on their territory.

The report is also silent when it comes to the Iranian public’s yearning for democracy and the regime’s brutal attacks on political dissidents.  The mullahs view democracy as an “usurpation of God’s authority to rule” and refuse to allow the open selection of candidates in elections.  They also manipulate voting tallies and then claim to be legitimate rulers.

The authors of the report declare they oppose Iran’s development of a nuclear weapon, but then shut their eyes to overwhelming evidence the regime is doing just this.  The authors believe the mullahs have not made a decision to build a nuclear weapon.  They cite one reference to a US intelligence assessment and reiterate Ayatollah Khamenei’s public declaration in a fatwa that the development and use of nuclear weapons are forbidden. While an article in Townhall, by a high rank Ayatollah who lives in exile describes Khamenei’s Nuclear Fatwa, an Irrefutable Lie, absent in the report is the fact that Khamenei has never written any document against nuclear weapons that carries his stamp, a standard practice for all fatwas.  Also, the fact that fatwas aren’t necessarily binding for the government and officials, and there is no punishment for failing to abide by a fatwa.

The authors conveniently neglect to quote from the same intelligence assessment that Iran has “pursued the capabilities … to give it the ability to build missile-deliverable nuclear weapons.”  In other words, the regime is developing the wherewithal to build a nuclear bomb, but hasn’t completed the process.

The International Atomic Energy Agency (IAEA) believes the regime recently tested nuclear detonators at the Prachin military site in Iran.  But the mullahs refuse to give inspectors access to the facility.

This isn’t the first time the regime has tried to hide its nuclear weapon development program.  In March 2003, IAEA inspectors were initially denied access to Kalaye Electric, which Iranian officials falsely described as a watch manufacturing company.   After months of delay, the inspectors were finally allowed to examine the site.  They discovered walls had recently been removed, floors were covered with new concrete, and a significant part of the plant was repainted.  Despite these efforts, the inspectors found trace amounts of uranium that had been enriched to a level needed to build a nuclear weapon.  Given the evidence, the regime confessed it had secretly conducted enrichment tests at the Kalaye Electric site.

This is just one of many instances of deception and subterfuge by the mullahs.  Economic sanctions were imposed on Iranian regime by the UN Security Council because of the regime’s ongoing failure to provide transparency in its nuclear program and repeated violations of the Non Proliferation Treaty (NPT).

The Iran Project authors sweep all of these inconvenient issues under the rug and suggest the US should become a partner with the mullahs to deal with various problems in the Middle East.  This includes joining forces to combat the Islamic State or ISIS in Iraq and working with the regime “as a full partner” to assist Afghanistan after US troops are withdrawn.

The report correctly blames former Iraqi Prime Minister Nuri al-Maliki for many of the problems today in Iraq.  He refused to share power with the Sunni Arabs and other rivals, corrupted the election process, and sought to monopolize power.  Not surprisingly, the authors of the report make no reference to Iran’s behind-the-scenes influence over al-Maliki, who was their puppet, implementing their policies.  The mullahs tried desperately to keep al-Maliki in power, using their considerable political influence in Iraq, without success.

At the heart of the Iran Project report is an effort by the authors to persuade readers to accept the Iranian regime as a legitimate authority.  Providing readers an accurate description of the regime would have undermined their political objective, hence their whitewash of the regime.

The authors portray a positive future if a nuclear agreement is reached with Iran.  The United States, they posit, “stands to reap more benefit than any other outside power from new patterns of cooperation [with Iran].”   Concluding a nuclear agreement, they claim, “will unlock the door to new options.”  It might integrate Iran into the world community and would encourage the regime “to pursue its interests through legitimate means rather than covert or illegal means.”

If the US fails to reach a nuclear accord with Iran, the authors predict dire consequences.   If there is no agreement, the US should be prepared for a “sustained confrontation with Iran.”   It would trigger a loss of support for economic sanctions and the mullahs would most likely refuse to collaborate with the US on other issues.

Furthermore, if the Rouhani government failed to reach a nuclear agreement and relieve the sanctions, “then the conservatives in Tehran would return to dominate the thinking and actions of the Supreme Leader.”

The mullahs would “build its nuclear program with renewed conviction…and might make a decision to build a nuclear weapon.”  And America would renew its interest in regime change, creating an environment that “could lead the United States and Israel to threaten military strikes, with the probability of war, either deliberate or inadvertent.”

The authors offer only two roads ahead.  One is based on negotiating a nuclear agreement that, in turn, might defang the Iranian pariah and open the door to partnering with the US to resolve foreign policy difficulties.  The other road leads to Iran’s development of a nuclear bomb and the probability of war. The very familiar tactic repeatedly used over the years to justify the failed policy of appeasement towards the mullahs in Iran, which has not only been unable to contain their progress on the nuclear front but has actually embolden the mullahs to meddle in the region and to create more crisis everywhere including Syria, Iraq and lately in Yemen.

The report, which claims to be a “tough-minded assessment” and “balanced,” is, in fact, fear-mongering propaganda.

Iranian regime is now the biggest sponsor of estate terrorism and is therefore the largest threat to the global peace. It is absurd to think America would collaborate with them to solve regional conflicts.  And only the most gullible and naive would have suggested diplomacy could tame the mullahs.

Yet now the authors of the Iran Project report recommend this same pathway in the hope the Iranian regime may become more peaceful and shed its extremist Islamic zeal.

The Iranian mullahs view the West’s appeasement as weakness.  They are hoping to buy enough time to complete work on a missile-deliverable nuclear weapon.

Hassan Rouhani, Iran’s smiling president, is no moderate.  Rouhani has held many of the top national defense positions and was appointed in 1991 by Supreme Leader Ali Khamenei to the Supreme National Security Council (SNSC), the country’s highest national security organization, comprised by the head of the Armed Forces, Chief of the Army, Minister of Intelligence and Security, Chief of the IRGC, and others.

The SNSC has a parallel organization (Omure Vijeh Committee) that oversees extralegal actions.  Rouhani was a member of the panel when it approved the bombing of the Israel Embassy in 1992 in Buenos Aires, which killed 29 people and wounded 242 others.  He also was a member when it authorized the 1994 suicide bombing of the AMIA building in Buenos Aires and the 1996 Khobar Towers truck bombing in Saudi Arabia that killed 19 American servicemen and wounded more than 500 other people.

Rouhani is no moderate as the authors of the report claim.  They falsely predict the conservatives in Tehran will return to dominate the “thinking and actions of the Supreme Leader” if a nuclear agreement is not reached.   Rouhani is a protégé of Khamenei and they both share responsibility for many terrorist attacks and assassinations of pro-democracy patriots seeking to overthrow the despotic regime.  Rouhani is a conservative, just as every other president of Iran has been a conservative in the past 35 years. 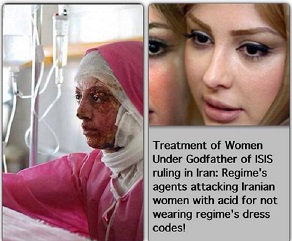 Victim of acid attacks on girls and women in Iran for disobeying regime’s dress code.

The recent Acid attacks on women and girls in Iran, and the unprecedented repression of religious minorities in Iran under Rouhani’s watch, only have one message, the Rouhani’s regime is no different than its predecessors and certainly not a moderate. In fact there is no evidence to suggest the Iranian regime can be rehabilitated.  The mullahs are driven by an extremist Islamic ideology. Even without nuclear weapon, they have been supporting the use of terror and have dispatched armed forces to disrupt neighboring governments with the goal of installing Islamic Republics.

The authors of the report offer only two options for dealing with the Iranian regime.  But there is a third option – regime change.  The West should announce its support for regime change in Iran.  It should not align with its tyrannical rulers, but with pro-democracy organizations that  seek to restore freedom in Iran.

The authors of the Iran Project refuse to adopt any measures that might undermine the mullahs’ authority, including regime change.  Instead, they seek policies that will enhance their legitimacy and appease their hegemonic ambitions.  As such they are enemies of democracy and their report should be discarded as a propaganda ploy designed to legitimatize the despotic Iranian regime.