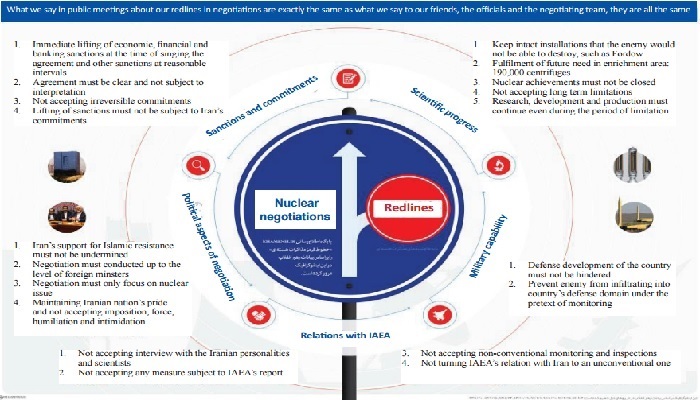 With June 30 having arrived and no nuclear agreement being reached between the Iran regime and the P5+1 group of nations, one could call everything “business as usual” with yet another deadline preceded by frantic talks and then slipping away without a ripple of consequence.

Of course the “new” immediate deadline will be July 9, in which the Obama administration needs to deliver an agreement to Congress to trigger a 30 day review period, otherwise if they miss it, Congress will have 60 days to review as part of a compromise deal struck between the administration and Sens. Bob Corker (R-TN) and Robert Menendez (D-NJ).

But this new deadline is just as likely to slide by as the one today and the reason for it was put on display today in bright, bold red lines by the regime’s top mullah, Ali Khamenei, who wasted no time taking to Twitter and his official website to post his own version of “Major Red Lines in Nuclear Negotiations” for the regime.

Khamenei’s red lines, unlike those laid down by President Obama after Assad in Syria gassed his own people, are firmly set and unlikely to change since Khamenei is empowered by the mullahs’ constitution to hold the final approval of any foreign agreements, which makes his red lines worth examining.

Khamenei’s red lines essentially repudiates every pointed allegedly agreed upon condition in earlier interim, framework agreements and reasserts the regime’s opposition to virtually all the conditions the P5+1 have sought over the past three years; even after making significant and grave concessions to the regime.

The fact that Khamenei repudiated almost every condition regime foreign minister Javad Zarif and its president, Hassan Rouhani touted as landmark agreements should come as no surprise really. Khamenei’s public tweets and statements following the interim agreement announced jointly by the regime and the P5+1 to much fanfare on April, 2015 clearly showed his displeasure and contention that the regime had not submitted to any of these conditions.

Not even regime cheerleader Trita Parsi of the National Iranian American Council could alter the inevitable outcome with his unsurprising appearance in Vienna, Austria, the site of these talks where he attempted to convince any reporter with a notebook, camera or microphone that the regime was indeed serious about these talks and on the verge of closing a deal.

But given the clear and unmistakable conditions laid out by Khamenei, the only real question is how willing is the Obama administration to concede even more and essentially give the regime a blank check or at least a $140 billion check, the amount in frozen assets the regime’s mullahs are lusting after to replenish their coffers drained by three proxy years in Syria, Iraq and Yemen.

William Kristol writing in The Weekly Standard warns the administration may have very well caved in on the all-important issue of inspection access by conceding that since the U.S. would not allow universal access to its own military sites, it could afford Iran the same consideration.

All of which sets the stage for the final act before July 9 of whether or not the P5+1 completely cave and adhere to all of Khamenei’s conditions or recognize in the final act that Iran’s mullahs really have no desire for an agreement and instead have been fooling the world for the past three years.