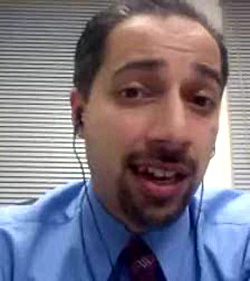 That ever loyal servant of the Iranian regime, Trita Parsi of the National Iranian American Council, penned an editorial appearing in Reuters where he used a curious turn of phrase saying there were schools of “doubt” in Iran as to who was calling the policy shots in the U.S. He was pointing out a view that held Iran’s mullahs either believed President Obama was genuinely interested in a new rapprochement or was simply being captive to the politics of Congress.

Parsi attempts to lay out the idea that Iran is stuck between a rock and a hard place because it wants to do the best deal it can, but has to contend with confusing American politics.

For Parsi’s benefit, we should point out it is because this is a democracy. Get it?

Democracies are messy affairs. They involve open and sometimes hostile public debate. They require free and fair elections. They generate substantial discussion on news media and social media. They need checks and balances to ensure the rights of minorities are respected. In short, they do all the things Iran’s mullahs are terrified of in their own country.

Parsi also attempts to posit the idea that sanctions against Iran are fast coming undone because of a recent delay proposed by Senate Democrats to give President Obama and Secretary of State John Kerry an additional two months to nudge Iran forward. Considering Iran has already had two years to stall, demand and berate negotiators, two months doesn’t seem like much.

Democrats, led by Senator Robert Menendez (D-NJ) were also clear in demanding any deal be reviewed by Congress and that they would hold any proposal under close scrutiny in meeting their approval. Not exactly a Rose Garden walk-through for Iran, but then again Parsi will take anything. So desperate is Iran to gain any advantage, it would take even this twig and portray it as an olive tree.

Parsi goes on to portray the complete erosion of Democratic support for new sanctions, but the irony is that the Democratic and Republican proposal is not for the imposition of new sanctions, but simply the re-imposition of existing sanctions that were temporarily suspended after the interim agreement was reached and contingent on Iranian regime making substantial progress forward.

Since then, however Iran’s progress has been as quick as a snail and as noticeable as glaciers growing larger. The regime in Iran has consistently refused access to additional nuclear research sites to the International Atomic Energy Agency. It has stepped up a brutal crackdown on human rights against its own citizens. It has engaged in four separate wars in Syria, Yemen, Iraq and Afghanistan now, while still supporting terror groups such as Hezbollah.

At no point has the regime in Iran made any substantial concessions on the core issues of reduction in centrifuge capacity and elimination of missile delivery technology obtained from North Korea, another rogue nuclear state.

With the spread of ISIS and Boko Haram and utter collapse of Yemen, the American people have raised concerns over terror above those of jobs and economy in recent polls. This leads one to wonder why Parsi takes the position that sanctions proponents are now on the margins in this debate.

We might excuse his hyperbole for the simple fact NIAC is a well-greased lackey for the mullahs in Iran, but considering the topic of his editorial, we might be more inclined to think Parsi shares the confusion of the mullahs in simply not understanding how a democratic society truly works.

While Parsi raises his histrionics, the fact remains Congress and a bipartisan coalition of Democrats and Republications numbering at least 62 Senators with an additional 14 patiently waiting two more months before pulling the proverbial trigger on sanctions are more than sufficient to re-impose sanctions and override any presidential veto. We assume Parsi is an intelligent operative for mullahs in Iran and can count votes, which may be why he is throwing everything he can in hopes something sticks before March 24th.