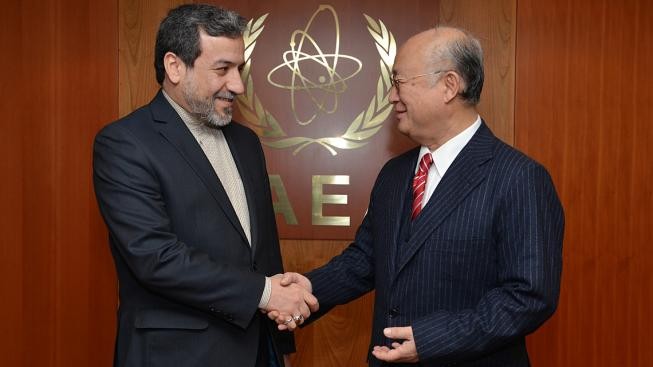 The Ongoing Appeasement of the Iran Regime

During the run up towards the completion of negotiations over the nuclear agreement with the Iran regime, the Obama administration and the Iran lobby likened it to the most significant foreign policy issue of our time. The words used by proponents in advocating the deal included “historic,” “transformational,” “ground breaking,” “momentous,” “consequential” and “important.”

You almost thought Trita Parsi, head of the National Iranian American Council and chief cheerleader for the regime, had a word-a-day calendar on his desk with new synonyms for “historic.”

The fact that proponents of the deal characterized the choices as being between “war” and “peace” helped to get the agreement passed, but it also gave the Iran regime the opening to hold the West linguistic hostages since by framing the agreement in that manner, supporters found themselves beholden to the mullahs in Tehran to the extent no matter what they did, supporters of the deal were going to have to cover for them in order to keep the agreement alive.

This leverage cleared the way for the continuing acts of appeasement being afforded to the mullahs in the run up towards implementing the agreement. The perception of needing to keep this deal alive quickly became more important than addressing how much the Iran regime might cheat and what to do in response if the mullahs did cheat.

The first was the completion of a secret side agreement between the Iran regime and the International Atomic Energy Agency, the arm of the United Nations Security Council responsible for inspections and compliance of nuclear issues.

The IAEA has worked for the past decade to gain access to regime nuclear facilities, its scientists and technicians, as well as documentation to ascertain the full scope and nature of Iran’s nuclear program. It has been stymied and stonewalled at every turn by the regime.

Beyond the obfuscation by the regime, it is imperative to any future compliance to the nuclear agreement that the IAEA establish a baseline of where Iran’s nuclear program stands. Without it, there is no way to make comparisons to see if the regime is indeed cheating.

The IAEA “is committed under the deal to release a report by year-end about the status of Iran’s alleged weaponization work. U.S. officials over the weekend said the IAEA report would have no bearing on moves by the international community to lift sanctions,” according to the Wall Street Journal.

“That final assessment, which the IAEA is aiming to complete by December 15th, is not a prerequisite for implementation day,” a senior U.S. official said Saturday. “We are not in a position to evaluate the quality…of the data. That is between Iran and the IAEA.”

The irony here is that the U.S. is basing its decision to move ahead with implementing the agreement with the regime on the findings of the IAEA inquiry, but at the same time is not going to evaluate the veracity of those findings. In essence, the U.S. and other nations will simply shrug and say “we believe you” even if Iran provides no information or complete access as per the agreement.

So on December 15th, if the IAEA certifies Iran as being in compliance even though it has no tangible proof the regime is in compliance, the political pressure will be such that the IAEA will rubberstamp the report and allow implementation to move forward.

As Armin Rosen writes in Business Insider: “In the process, the US has essentially decided that the investigation of past nuclear-weapons work, and the state of current Iranian weaponization expertise, is nonbinding on a treaty specifically meant to prevent Iran from obtaining a nuclear weapon.”

If it wasn’t such a serious issue, it would be Orwellian in nature.

The U.S., Britain, France and Germany called on UN Security Council’s Iran sanctions committee to take action over the missile test by Tehran. Diplomats have said it was possible for the sanctions committee to blacklist additional Iranian individuals or entities if it determined that the missile launch had breached the U.N. ban. However, they said Russia and China, which have opposed the sanctions on Iran’s missile program, might block any such moves.

All of which sets up the most obvious question facing everyone. What if Iran cheats? What should the response be?

Even though the U.S. asked the Security Council to take action over the missile test, U.S. officials said in the next breath that the missile test itself didn’t violate the nuclear deal.

Let that sink in for a second. We sent a letter calling for action for a violation of the UN ban, but in the same moment said the launch did not violate the nuclear agreement. So we are scolding the mullahs, but also letting them off the hook.

It’s a bipolar approach to foreign policy worthy of analysis by a psychiatrist.

In both cases, the Iran regime is clearly acting to breach terms of not only the nuclear agreement, but existing sanctions that will remain in effect after the nuclear deal goes into effect and the repercussions of those violations appear to be non-existent or minimal. This does nothing to deter the mullahs and only empowers them into believing they can continue to press their advantage.