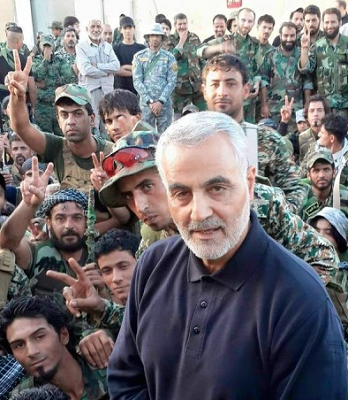 The Price of Failure in Syria for Iran Regime

With the Iran regime’s all-in move in Syria through the commitment of thousands of additional troops, the loss of top commanders killed in fighting by Syrian rebels and the new alliance with Russia, the mullahs in Tehran have painted themselves into something of a corner.

The most obvious price to be paid by the regime will be whether or not a military campaign against the broad coalition of rebels, Islamic groups and secular opponents actually succeeds or fails. If it fails, the price will be extraordinarily high for Tehran. It will deal a crushing blow to the carefully crafted image of military supremacy the regime cultivates and it will send its leadership into an inevitable round of finger pointing and blame.

Failure in Syria will also carry a financial price tag since the regime’s previous support in propping up the Assad regime has tallied over $15 billion so far and with the stepped up reinforcements and new offensive, the costs are likely to spiral into the upper atmosphere. Depending on how long the fight takes, that $150 billion the mullahs are eager to get their hands on as the result of the nuclear deal could shrink very quickly.

The stakes for the regime are unquestionably high as it has put Maj. Gen. Qasem Soleimani, the leader of its Quds Forces, at the frontlines to direct Shiite forces from three countries including Iraq, Lebanon and Afghan proxies in what is shaping up as a major assault on the rebel stronghold of Aleppo.

The fact that Russia has been bombing rebel forces and not areas controlled by ISIS, and that Iran is targeting Aleppo, a strategic economic hub controlled by rebel forces early in the civil war, tells us all we need to know about the priorities of the regime.

The fact that Soleimani, who only recently was a frequent visitor to the battlefields in Iraq where victories for the regime grew scarce as the war stagnated, was shifted over to Syria shows the changing priorities of the Iran regime as it struggles to find a military victory anywhere in the conflicts it has started.

Just as its fight in Iraq and ground to a halt, the Houthi rebels Iran supports in Yemen have been thrown back under the combined assault of an air and ground campaign backed by Saudi Arabia and other Gulf states.

As the fighting in Syria went badly for Iranian-backed forces, the mullahs sent Soleimani to Moscow to beg for Russian intervention and have set up this new offensive as a last-ditch effort to salvage any kind of good military news.

Kitaeb Hezbollah, an Iranian-backed Shiite militia designated a terrorist organization by the United States, sent 1,000 troops to Aleppo last weekend, said a senior official with the militia. He spoke on the condition of anonymity, citing orders that the deployment not be made public yet according to the Washington Post.

He said the men were part of the group’s elite forces, which have experience from fighting the United States in Iraq. They have done previous rotations in Syria, he said.

“They were sent based on a demand from Soleimani,” he said. “He specifically requested them for the launch of the operation of Aleppo, which is going to be led by Kitaeb directly under the supervision of Soleimani.”

The militia official said the Syrian army would have a “minor role.”

The rapid ramp up in Iranian aggressiveness with the offensive in Syria, launching of new ballistic missiles and conviction of Washington Post reporter Jason Rezaian have all taken on a certain manic quality as the regime attempts to literally spit out as much vitriol as it can in the shortest amount of time.

It’s a stunning period of chest beating at a time when the regime would be normally seen celebrating what it touts as a victory in its recently completed nuclear negotiations, but this almost bipolar behavior demonstrates the deep schism in regime politics as the religious forces headed by Ali Khamenei exert their control over the political puppets of leaders such as Hassan Rouhani. In many ways, the militant nature of the regime’s recent actions is a reaffirmation that there are no such a thing as moderates within the Iranian regime.

This idea was reinforced when an influential Iranian lawmaker delivered inflammatory new accusations on Monday against Jason Rezaian, The Washington Post’s Tehran reporter convicted of espionage this month, asserting that he had plotted with seditionists.

The New York Times reported that in an interview with Iran’s semiofficial Fars News Agency, the lawmaker, Javad Karimi-Qoddusi, also sought to depict Rezaian as a nefarious spy who had used his credentials as a journalist as a ruse to gain insights that would be valuable to the Iranian government’s enemies.”

It’s indicative of the deep-seated paranoia that runs throughout the regime’s government and why any agreement negotiated with Iran is doomed to failure as there is very little rational thought within the top ranks of the regime’s leadership.