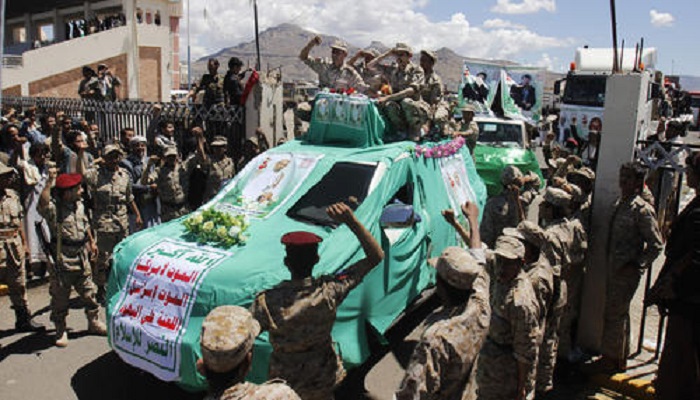 Events in the Mideast are moving fast as Yemen is toppled by Iran-backed Houthi rebels, inviting a response by Saudi Arabia which launched air strikes in Yemen alongside Gulf State allies in an effort to check the progress being made by another Iranian regime proxy.

The stunning advances made by the Houthis shined a spotlight on a favorite tactic of Iran’s mullahs which is the use of proxies to fight their wars. It’s a tactic that harkens back to the Cold War-era fights in Southeast Asia and Africa between the West and old Soviet empire as Third World countries supplied the cannon fodder for countless wars, large and small.

The Iranian regime took a page out of the history books in funding, arming, training and then directing terror networks over the past three decades, most notably Hezbollah which has chalked up several ignominious victories, including:

Iran’s mullahs have used Hezbollah fighters to prevent the fall of Syria’s President Assad and target moderate rebels which has resulted in ISIS to rise up and form.

The Iranian regime has also used its virtual puppeteering of Shiite militias in Iraq in fighting ISIS that gave it the excuse necessary to move its military wholesale into Iraq and take over vast parts of that country’s military and political arms.

Though the recent Yemen attack by the gulf countries shows that the mullahs will pay a price for overreaching themselves, yet the regime in Iran, desperate to create crisis outside (to cover up the already exploding discontent of the Iranians against mullah’s dictatorship), has moved its proxies on the chessboard and enabled it to now interfere in a swath of territory stretching from the Mediterranean with Lebanon, through Syria and Iraq and now down through Yemen.

Yet, given the long and bloody history of the Iranian regime’s use of proxies to wage war, terror and murder, the regime’s lobbying and PR machine continually seeks to gloss over that record and instead attempt to rehabilitate its leaders. It’s akin to hiring a PR firm to try and redo the brand image of the Nazis.

The most recent example is an editorial from the National Iranian American Council’s Trita Parsi who wrote in The Atlantic that the regime’s top mullah, Ali Khamenei was a misunderstood softie who really wanted peace with the West. Parsi offers as logic, Iran’s historical interactions with the world going back to 1813 as reason for the regime’s natural suspicions of the rest of the world’s motives

Now, I am willing to concede that Khamenei is an old man, but I doubt he was around to be personally offended by anything that happened in the early 19th century. Parsi also never mentions Khamenei’s direction of Iran’s proxies, or his oversight of one of the most brutal human rights periods in Iranian history

Parsi also skips over Khamenei’s annual verbal calisthenics of leading chants of “Death to America” or his angry pronouncements that Iran will give no quarter in its efforts to preserve its multi-billion nuclear development program that was conceived in secret, violating international agreements and to this day, still largely uninspected by international agencies.

One would love to ask Parsi why, if Iran’s history is so important to understanding the motivations of the regime’s leadership, can’t the West use the Iranian regime’s bloody history of using proxies in its wars as evidence of the regime’s desire to wage war until it achieves its goals of establishing an Islamic extremist empire for itself?

Of course, he would probably tell us Iran doesn’t have any proxies.