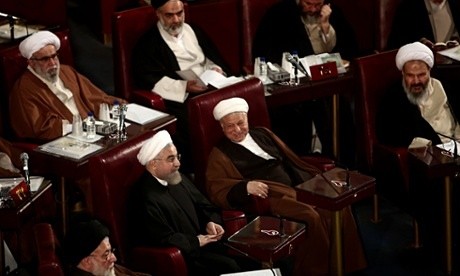 Even though the Iran regime has consistently disregarded basic human rights since the revolution in 1979, the world has evolved its approach to this blatant brutality from stern opposition to debased appeasement.

The human rights situation in Iran has gotten progressively worse to a point where the United Nations appointed a Special Rapporteur for Human Rights just for Iran. Dr. Ahmed Shaheed, the special rapporteur, released another in a series of critical reports documenting human rights abuses within the regime.

Entitled “The Situation of Human Rights in the Islamic Republic of Iran,” the report reveals that Iranians are worse off under the allegedly “moderate” reign of Hassan Rouhani than under the despised Mahmoud Ahmadinejad.

While the regime is on pace to execute an astounding 1,000 people this year, the report discusses other brutal acts such as “more than 480 persons flogged during the first 15 days of Ramadan for not fasting.” Also, two people convicted of theft had their limbs amputated mere weeks before the concluded nuclear deal. This is while money laundering and embezzlements by high rank mullahs and officials of the regime, worth of billions of dollars continue unabated.

A man identified as “Hamid S.” reportedly had his left eye and right ear surgically removed in January of this year after being found guilty of attacking another man with acid in 2005, which caused the victim to lose the same body parts. Another man was also forcibly blinded in March of this year in a process known as qisas, or “retribution-in-kind,” for throwing acid on another man in 2009, according to Breitbart News.

While these human rights violations continue relentlessly and have actually increased in severity and frequency after passage of the nuclear agreement, the Obama administration has oddly continued to make qualitative distinctions in picking and choosing options in dealing with a militant Iran regime.

Those distinctions were on display when Rick Stengel, the U.S. undersecretary of state for diplomacy and public affairs, appeared on MSNBC’s “Morning Joe” program to promote “The International Day to End Impunity for Crimes Against Journalists.”

Under questioning by hosts Joe Scarborough and Mike Brezinski, Stengel struggled to answer why the U.S. had not been able to secure the release of Washington Post reporter Jason Rezaian and other American hostages.

He spent some of the interview explaining why Rezaian’s plight was less important than the overall nuclear issue, according to Business Insider.

He ended up implying that crimes against even American journalists are, at best, a midlevel priority for US foreign policy — an especially awkward tactic, considering the point of his appearance was to discuss US efforts to end impunity for crimes against journalists.

“Stengel perhaps didn’t intend to do this, but he bluntly illustrated the trade-offs in the US’s Iran policy. If you’re going to prioritize arms control above everything else, then it stands to reason that press freedom — and even the freedom and protection of US citizens — is secondary to other, supposedly higher concerns,” writes Armin Rosen in the Business Insider piece.

“Taken one way, Stengel is giving opponents of the US a recipe for getting a relatively free pass on both human rights and the harassment of American citizens. But he’s also admitting that there are unsavory trade-offs at the heart of the Obama administration’s biggest foreign-policy accomplishment,” he concludes.

Rosen is correct and points out why American policy towards the Iran regime is flawed from the start, because it does not recognize the monolithic nature of regime policy as formulated and pursued by the mullahs in Tehran.

As a religious theocracy, Iranian regime is uniformly and unconditionally devoted to its first and primary goal; preserving the Velayat-e-Faqih rule (supremacy of regime’s Supreme Leader on all aspects of the Iranian people’s lives) and the state it spawned.

Efforts to appease Tehran such as the nuclear deal, inviting Iran to talks on Syria, rescinding calls to remove Assad from power, and failing to tie human rights to agreements, all feed into the regime belief that it does not have to do anything to accommodate the West in order to achieve its goals.

This has been shown in yet another way when the International Atomic Energy Agency claimed that the regime had begun the process of shutting down its nuclear centrifuges as part of the nuclear agreement, only to have the spokesman for the Atomic Energy Organization of Iran contradict those claims.

“AEOI’s goal in nuclear negotiations was to minimize the limitations so that they would not deprive the country from nuclear technology, said Behrooz Kamalvandi as quoted in regime-run media. “He pointed out that Iran also wanted its enrichment program to be recognized and the sanctions to be terminated at the same time.”

The regime also showed its disregard for international concerns as it arrested a Lebanese-born tech executive with ties to U.S. businesses. The announcement was the first word from Iran on Nizar Ahmad Zakka, whose colleagues said he did not board a scheduled flight from Tehran on Sept. 18 after attending a conference. Zakka’s organization is an information and communications technology group that has offices in Lebanon, Iraq and Washington.

The arrest follows the arrest of Siamak Namazi, a regime supporter with close ties to the Iran lobby through the National Iranian American Council and its head, Trita Parsi.

On top of which also comes word that an Iranian actress was forced to flee after being criticized for publishing pictures on social media showing her without traditional Muslim head coverings, or hijab.

Her situation is even more striking given the recent leadership conference for the NIAC, which devoted a large section to a discussion on the arts in Iran and why there should be optimism about them.

Paradoxically, while artists, actors and journalists are forced to flee Iran, NIAC notes its belief that economic sanctions have hurt the arts in Iran and never mentions the crackdown on the Iranian creative community by the regime.

We can only hope for a day when Iran’s religious government is changed to a democratic, secular one that respects the rights of women and journalists.