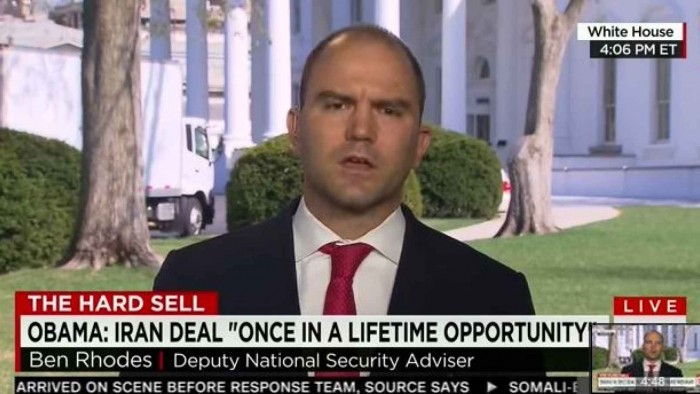 The Truth About Working With the Iran Lobby

The New York Times magazine published an in-depth examination by David Samuels of Ben Rhodes, the 38-year-old deputy national security advisor for strategic communications in the Obama administration, who detailed his strategy for passing the Iranian nuclear agreement and close coordination between the administration and various members of the Iran lobby, including several people and organizations closely tied with the regime.

The piece is a stunning admission of how the Obama administration’s policy of appeasing the mullahs in Iran was closely coordinated with the Iran lobby and how their efforts were designed to build a PR campaign designed to project a false image of the regime and cover the most extreme actions by Iran including severe human rights violations and its sponsorship of terrorism.

Since the nuclear agreement was completed, Rhodes has worked overtime to continually keep bad news about the Iranian regime from obstructing the president’s goals of fostering new relations with the regime no matter how provocative the acts.

One example was the unlawful detaining of 10 U.S. sailors by the Iranian regime and how Rhodes worked to keep the news from breaking before President Obama’s final State of the Union speech.

As the Times recounts, Rhodes found out about the Iranian action earlier that morning but was trying to keep it out of the news until after the president’s speech. “They can’t keep a secret for two hours,” Rhodes says, with a tone of mild exasperation at the break in message discipline.

Rhodes commanded a large and sophisticated network described by the Times of officials, talking heads, columnists and newspaper reporters, web jockeys and outside advocates who can tweet at critics and tweak their stories backed up by quotations from “senior White House officials” and “spokespeople.”

The defense of the Iranian regime goes out to “the three big briefing podiums — the White House, the State Department and the Pentagon — and across the Twitterverse, where it springs to life in dozens of insta-stories, which over the next five hours don formal dress for mainstream outlets. It’s a tutorial in the making of a digital news microclimate.”

These messages were also conveyed in cooperation with regime supportive groups such as the Ploughshares Fund, which helped fund the notorious National Iranian American Council which similarly carried the administration’s messages, as well as fed them through ex-staffers who were now working with Rhodes.

The story goes on to describe how the administration had been eager to do a deal with the Iranian regime going as far back as 2012 irrespective of the regime’s countless violations and aggressive acts.

The narrative Rhodes developed centered around the perception that “moderates” led by Hassan Rouhani beat “hardliners” and provided the opening to do a deal with Iran and empower these “moderates.” It was a well-worn lure the mullahs had tossed out time and time again, and in Rhodes, they found a receptive and willing audience for their lies.

“The idea that there was a new reality in Iran was politically useful to the Obama administration. By obtaining broad public currency for the thought that there was a significant split in the regime, and that the administration was reaching out to moderate-minded Iranians who wanted peaceful relations with their neighbors and with America, Obama was able to evade what might have otherwise been a divisive but clarifying debate over the actual policy choices that his administration was making,” the Times wrote.

An aggressive digital outreach campaign was launched in support of the nuclear deal that included using the Twitter handle @TheIranDeal to ensure no negative tweet about the deal passed without a rebuttal, as well as enlisting journalists who supported the Iranian regime such as Laura Rozen of Al-Monitor, who essentially served as an automatic retweeter for the administration and Iran lobby on the subject.

The White House point person during the later stage of the negotiations was Rob Malley, a favored troubleshooter who is currently running negotiations that could keep the Syrian dictator Bashar al-Assad in power, another high priority item for the Iranian regime.

At one point Rhodes even acknowledges that regime leader Hassan Rouhani and Javad Zarif, the regime foreign minister, are in fact not “real reformers,” which makes his work to sell the deal to the American public one of the greatest deceptions ever played on them.

The condemnation and reaction was swift and unequivocal as John Podhoretz took the administration to task in the New York Post:

The Iran deal, you may recall, was wildly unpopular with the American people. To ensure senators didn’t cast a two-thirds vote against it and kill it, the White House set up a digital response “war room” whose purpose was relentlessly to make the case that a vote against the deal was a vote for war, he writes.

It could only work if water-carriers did the White House’s job for it, and nonprofit water-carriers did their faithful duty. “We created an echo chamber,” Rhodes tells Samuels about the journalists and think-tankers who were discussing the Iran deal based almost entirely on information given to them by the White House. “They were saying things that validated what we had given them to say,” Podhoretz adds.

The reality of the Times piece is to shine a bright light on how disingenuous the entire debate was around the Iran nuclear deal; a deal that has empowered a weakened, unstable Iranian regime and allowed it to continue during a time following the Arab Spring and protests over the 2009 uprisings in which it teetered on the brink of collapse.