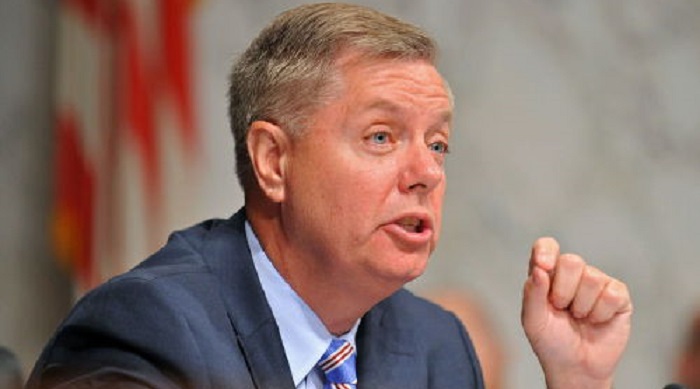 Sen. Lindsey Graham (R-SC) wrote in this weekend’s Wall Street Journal an editorial outlining eight conditions the Iran regime must meet before any nuclear agreement is reached. The points included common sense ideas such as closure of all hardened or formerly secret nuclear sites and allowing anytime, anywhere inspections of all Iranian military and nonmilitary facilities.

His points are valid and important in order to ensure any deal removes the threat of nuclear weapons from coming into the possession of the Islamic state., but the most important point he outlined as the conditioning of relief from economic sanctions on certification by the International Atomic Energy Agency that Iran was in full compliance and demonstrate that compliance over a sustained period of time.

The reason why this condition stands out above all others lies in the most pressing need Iran has right now which is cash. Iran’s mullahs have followed a policy of destabilizing the Middle East over the last three years including the funding of Shiite militias in Iraq and virtually taking over its government, supplying arms and support to the Syrian regime in its bloody civil war, and supporting a Houthi rebel army that has overthrown the government of Yemen and plunged the Arabian peninsula into a dangerous proxy war with Saudi Arabia and Sunni gulf states.

Iran’s mullahs have pressed hard for the lifting of all economic sanctions at once should a deal be completed because it needs the estimated $100 billion in frozen assets to help resupply its coffers depleted by proxy wars and plunging oil prices.

But even with this thirst for cash, Iran remains obstinate on even the most basic parts of an agreement. The regime’s top negotiator and Deputy Foreign Minister Abbas Araqchi opened talks with the IAEA recently which has been demanding access to Iranian military sites such as Parchin. “Iran, which is extremely reluctant to allow atomic inspectors access to military sites, has been stalling the investigation since last August,” reported Reuters.

This shows that mullahs’ desire for cash does have limits, namely they do not want to limit their ability to produce nuclear weapons. Iran’s mullahs believe that possession of nukes places Iran in a prime position to be the power in the region and weapons of mass destruction allow it to offset a nuclear-capable Israel, while also holding a hammer over the heads of Sunni states such as Saudi Arabia.

But this pursuit of weapons and funding of proxy wars have come at a steep price for ordinary Iranians. As Al Arabiya News Channel recently reported in a new series of stories focused on poverty in Iran:

“In 1979, shortly after the shah had been toppled, the new theocratic ruler Ruhollah Khomeini promised free electricity, water supplies and transportation services to all Iranians, to be paid for by oil revenues under a ‘just’ Islamic economic system.  Yet this promise – repeated by several regime presidents after him to make the poor feel the benefits of Iran’s oil wealth – was never delivered.”

Oddly enough though, U.S. Secretary of State John Kerry seems to think North Korea can somehow learn a positive lesson from any completed deal with Iran, which leaves objective observers dumbstruck since it was North Korea that provided the mullahs with the template for achieving nuclear capability by negotiating an agreement and then violating every aspect of it. In fact, North Korea has supplied Iran with much of its nuclear research and virtually all of its ballistic missile capability under manufacturing license.

Unfortunately while the rhetoric is starting to heat up on the near presidential campaign trail, the news media have all but ignored violent protests that have broken out in Iranian cities. The recent protests against the regime’s oppression began after a May 4 incident in which 27-year-old Farinaz Khosravani jumped to her death from a window when an Iranian intelligence officer allegedly tried to rape her at the hotel where she worked in the city of Mahabad according to the International Business Times.

The mass protests have been met harshly by Iranian regime’s security forces with the potential for even more deaths as a result.

All of which leads us to the most combustible issue coming to a head this week as an Iranian ship heads towards Yemen with what the regime calls a cargo of “humanitarian supplies,” but with no ability to independently verify it.

Iranian Gen. Masoud Jazayeri, the deputy chief of staff, warned that any attempt to interfere with the vessel would “spark a fire” in a clear warning to the U.S. Navy. The stakes rise higher as the Iran regime starts the weekend talking about a nuclear peace and ends it with warnings of war.