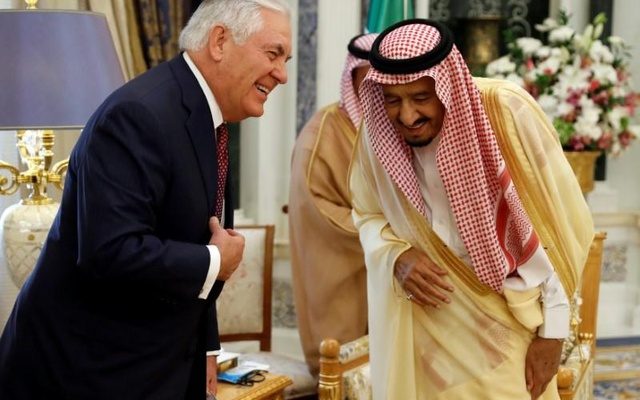 Secretary of State Rex Tillerson dived deep into Middle East politics at a time where the threat from ISIS was diminishing after battlefield victories against the Islamic extremists. His whirlwind stops in Saudi Arabia, Afghanistan and Iraq were designed to hold the line in a post-ISIS world against the encroaching influence of the Iranian regime.

In Saudi Arabia, Secretary Tillerson urged Saudi Arabia to counter Iran’s influence in Iraq by strengthening its ties with Baghdad in a meeting with King Salman of Saudi Arabia and Iraqi prime minister Haider al-Abadi.

His meeting included a call for Iranian-backed Shiite militias fighting in Iraq to leave and go back to their homes.

“Certainly Iranian militias that are in Iraq, now that the fight against Daesh and ISIS is coming to a close, those militias need to go home,” Tillerson said, using two other names for Islamic State. “Any foreign fighters in Iraq need to go home and allow the Iraqi people to regain control of areas that had been overtaken.”

Tillerson’s focus on these militias, known as Popular Mobilization Forces, he was taking aim at the growing influence of the Iranian regime’s Revolutionary Guard Corps and its Quds Force which has operated in Iraq in an increasingly visible way during the war against ISIS.

During the conflict, Tehran has sought to exert more influence in Iraq through participation in Iraq’s political process; a fraught process that nearly collapsed Iraq when former prime minister Nouri al-Maliki acted on Iranian wishes in expelling Sunni power sharing in his government, sparking a new round of sectarian conflict and empowering ISIS with the collapse of Mosul.

But Tillerson’s visit highlighted a new initiative to counter Iranian influence as Saudi Arabia has taken several steps to deepen ties between Riyadh and Baghdad.

Saudi Arabia has reopened its border with Iraq for the first time in decades and restarted direct flights between Riyadh and Baghdad. Washington is hoping the political and economic ties will deepen through the newly minted Saudi-Iraq Coordination Council, reported the Wall Street Journal.

“We believe this will in some ways counter some of the unproductive influences of Iran inside of Iraq,” Tillerson said during a news conference in Riyadh.

He urged Saudi Arabia’s involvement in Iraq’s reconstruction, as Baghdad looks to rebuild the country after a three-year war against Islamic State that destroyed cities across the nation, and called economic revitalization vital to keeping a hard-won peace.

The full-court press to normalize relations also goes a long way to counter persistent arguments made by the Iran lobby and other regime supporters that U.S. policy in the Middle East during the Trump administration was only reactionary and intent on starting a new conflict with Iran.

The diplomatic efforts led by Tillerson represent another watershed moment for President Trump in the Middle East.

His earlier announcement to not certify the Iranian regime in compliance with the Iran nuclear deal to trigger Congressional review more correctly puts the question of how to address Iran’s larger militant actions such as development of ballistic missiles in the arena of public debate where President Barack Obama had previously sought to steer clear of when negotiating the agreement originally.

Iranian regime advocates such as the National Iranian American Council had laboriously tried to shield the mullahs in Tehran from facing questions about Iran’s dismal human rights record or support for terrorist groups during the original talks two years ago, but in the intervening time the mullahs have stepped up their efforts in swinging the Syrian civil war over to the Assad regime, as well as rapidly build and deploy powerful new ballistic missiles.

The decertification of the Iran nuclear deal is only one of several other initiatives being made by the Trump administration to roll back Iranian regime’s influence including:

More importantly, the U.S. is again openly warning companies from doing business with Iranian regime’s “Revolutionary Guard Corps” (IRGC) as it considers broader terrorist designations against the main tool of the mullahs.

The U.S. last week announced tough new sanctions against the IRGC because of its support for terrorism, effectively excluding it from the US financial system. Companies doing business with the group also risk penalties.

The push for expanded sanctions against the IRGC recalled the effectiveness of broad economic sanctions placed by the former administrations of presidents Bill Clinton and George W. Bush that put a stranglehold on the Iranian regime’s economy and brought the mullahs to the bargaining table in the first place.

Unlike the Obama administration, President Trump seems intent on not replaying the mistake of appeasement made by his predecessor and instead forge a new deal that finally brings Iranian regime’s extremism to heel.