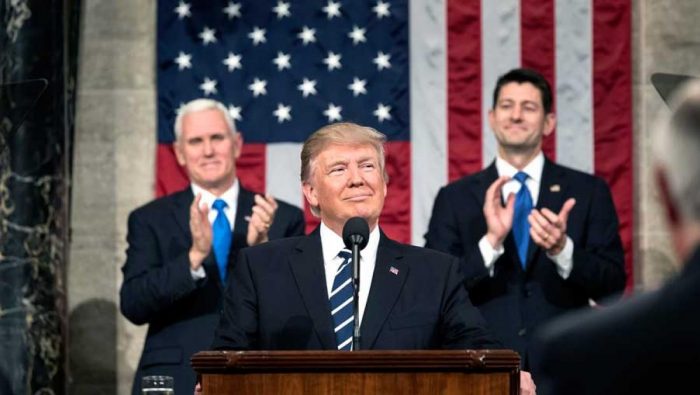 President Donald Trump delivered his first State of the Union speech in which he went through a laundry list of domestic policy achievements as all presidents are wont to do. As expected, the speech will generate much debate and fierce support and opposition, but for our purposes, we are more interested in the reaction of the Iran lobby to his specific comments on the rogue regime in Iran.

In his speech, the president singled out recognition of the ongoing protests erupting in Iran:

He also went on to criticize the Iran nuclear deal:

“I am asking the Congress to address the fundamental flaws in the terrible Iran nuclear deal.”

President Trump’s comments were a stark contrast to his predecessor’s efforts to tout diplomatic overtures to the mullahs in Tehran as a means to cajole them into submission; ultimately failing entirely.

Whereas President Obama took nearly a week to toughen his talk after the brutal suppression of protests over the disputed 2009 presidential election in Iran, President Trump opted to embrace protests in Iran even as they broke out on the streets of cities throughout Iran.

President Trump’s actions also stand in opposition to the key messages and slogans endlessly uttered by the Iran lobby and some of its chief leaders such as the National Iranian American Council which always sought to deflect any potential criticisms of Iran or its theocratic leadership.

The NIAC’s Trita Parsi wasted no time in jumping up to attack President Trump over his support for Iranian protestors.

On his Twitter feed, which people should look at just for the Hollywood-like pats on the back he gives himself over his new book, Parsi tried to turn the president’s comments away from the legitimate protests in Iran towards his immigration ban to halt the flow of terrorists from countries that support terrorism.

“No Mr. Trump, you did not stand with the people of Iran when you banned them from visiting their American relatives in the US, nor when you tried to turn legitimate protests against the Iranian government into a tool for your Saudi-sponsored push for war…” Parsi tweeted.

It really is amazing how Parsi is able to cram so much misinformation in less than 140 characters.

He accuses the president of supporting the protestors in Iran as a pretense for some Saudi Arabian plan for war against the Iranian regime. Of course, Parsi neglects to mention that it was Iran’s intervention in the Syrian civil war and the Houthi rebellion in Yemen that brought it into direct conflict with the Saudis.

It has always been the mullahs in Tehran that have destabilized the Middle East through their intervention and use of the Revolutionary Guards and Quds Forces to subvert and attack their neighbors.

And Parsi and his colleagues at the NIAC have always stood by them and defended them against attacks; diplomatic or journalistic.

Ryan Costello of the NIAC, sent out a similar tweet attacking President Trump on the immigration ban. Fortunately, no one seemed to be listening with only two retweets five hours after the speech.

Therein lies the problem confronting the NIAC and its fellow travelers in the Iran lobby: fewer and fewer people seem to be caring what it has to say. With a hyperactive Twitterverse exploding with commentary about the president’s speech, Parsi’s tweets and those of his NIAC’s cohorts garnered little social media traction.

An odd situation considering how their profiles boast of thousands of followers. One might wonder if Parsi and his colleagues bought their followers from social media firms such as Devumi as recently reported widely of similar scams by several noted celebrities.

While Parsi claims to have over 71,600 followers, the guy can only get 12 retweets on his anti-Trump tirade?

While Parsi has always had a problem with generating fake news, he seems to be having trouble generating any interest out his Twitter followers except by click-baiting profiles that only retweet such as @sabengel4 which seems to have generated an amazing amount of retweets for Parsi, but not authored one original tweet.

This should lead to a broader and deeper discussion of just how much influence does Parsi and the NIAC really wield these days in the post-Obama world they now find themselves in. With events in Iran moving away from them with a mass rebellion by the Iranian people and a regime not living up to the nuclear deal and Trump administration outmaneuvering them on almost every front, the NIAC and Parsi seem to be contestants on the latest episode of “Survivor.”

This growing isolation can be seen in the decidedly less than ample access the NIAC seems to enjoy from mainstream media outlets which carry fewer and fewer editorials and opinion pieces authored by Parsi and his colleagues.

It seems the only places Parsi can get an audience is only when he bashes President Trump on issues such as immigration on progressive media outlets or blogs or his annual appearance on Russia Today.

In many ways, Parsi is becoming the very thing he seems to despise the most as evidenced by his ham-handed self-promotion over his latest non-bestseller: irrelevant.