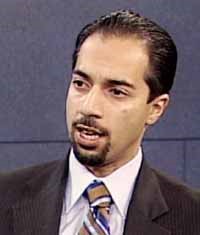 Trita Parsi, a Swedish-Iranian citizen, moved to the US to set up the National Iranian American Council (NIAC) to influence US – Iran policy. He has close ties to companies linked to the Iranian regime and has collaborated with its leadership to distribute Iranian documents in the US to influence US policy toward Tehran. Parsi opposes regime change in Iran and set up a website to attack an opposition group that seeks to restore democracy and freedom in Iran. NIAC widely overstates its number of members and many Iranian Americans believe Parsi is an “intellectually dishonest regime apologist and an unofficial and unregistered lobbyist for the Iranian regime.”

Trita Parsi was born on July 21, 1974, in Ahvaz, a city in southwestern Iran.  His family relocated to Sweden a year before Iran’s 1979 Revolution.  Parsi retained his citizenship of Iran and has a second passport from Sweden.  In the US, he’s an alien resident with a Green Card and apparently has made no effort to become a citizen.

Parsi first traveled to the US in 1991 to attend Barnsville High School in Ohio as an exchange student.  He reportedly experienced difficulties with his host family and would have had to return to Sweden had Bob Ney, then a state senator, not intervened on his behalf.  Parsi remained in the US and in 1992 he graduated from high school and then returned to Sweden.

The next period in Parsi’s life is unclear.  It is known that when he was 25 years old he traveled in the summer of 1997 to Washington, DC to work as an intern for then-Congressman Robert Ney.  In August he founded “Iranians for International Cooperation” to lobby policymakers in the US and Europe.[1]

In the summer of 1998, Parsi worked at a bank (Handelsbanken) in Stockholm and then traveled to New York, where he spent four months (Sept. 1998-Jan. 1999) at Sweden’s Mission to the United Nations.

In April 1999, Parsi applied for the position of Executive Director at the American-Iranian Council (AIC), a non-profit organization founded by Rutgers University Professor Houshang Amirachmadi.  Parsi was not selected for the position.

In November 1999, Parsi presented a paper coauthored by Siamak Namazi (see below for more details) at a conference in Cypress.

Bob Ney and Trita Parsi
Trita Parsi traveled to Barnsville, Ohio, in 1991 as an exchange student to complete his final year of high school. Of all places in the US, why he selected this remote town, with a population of less than 4,000, with a single high school and minimal faculty, is unknown.
While at the school, Parsi claimed he had problems with his host family and sought help from Bob Ney, then a state senator, who intervened on his behalf. Ney had lived in Iran, teaching English, in 1979-80, and spoke fluent Farsi. He later attended Ohio State University’s extension branch in Saint Clarsville, Ohio, about 15 miles from Barnsville.
Ney was elected to Congress in 1995. Two years later Parsi returned to the US to work as an intern in Ney’s Washington office. Parsi moved to the US in 2001 to work at the American Iranian Council (AIC) and a year later started NIAC. During this time, Parsi was an advisor to Cong. Ney, drafting speeches, press releases, and legislation.
Cong. Ney took illegal gifts from lobbyist Jack Abramoff in exchange for political favors and resigned from Congress in 2006, after pleading guilty to charges of conspiracy and making false statements. He was sentenced to 30 months in prison.

After graduating, Parsi worked for about a year at Kreab, a communications company in Sweden.

Parsi was offered the position of Director of Development at AIC in early 2001.  After receiving a work permit, he moved to the US in February to begin work at the organization.  While at AIC, Parsi planned the structure of a new lobbying NGO.  He worked at AIC for less than a year, and then left to begin a Ph.D. program at the School for Advanced International Studies at Johns Hopkins University.

In 2002, Parsi and Alex Patico co-founded the National Iranian-American Council.  The same year, Parsi was hired by Atief Bahar, an Iranian consulting company with close ties to the regime, to write a newsletter on political issues in Washington, DC regarding Iran.

From November 2001 to June 2005, Parsi was a “foreign policy advisor” to Congressman Robert Ney.

In 2003, Parsi married Amina Semlali, a Swedish citizen.  Parsi worked part-time at NIAC until completing his Ph.D. in 2006.  He obtained a Green Card to remain in the US.  His thesis was published in 2007 as a book, titled “Treacherous Alliance: The Secret Dealings of Iran, Israel and the United States.”

In 2012, Parsi published a second book, “A Single Roll of the Dice; Obama’s Diplomacy with Iran.”

[2] No date is shown on the CV, although it lists Parsi’s “student address” in Stockholm, Sweden, which would indicate the date is prior to his relocation in the US in early 2001.