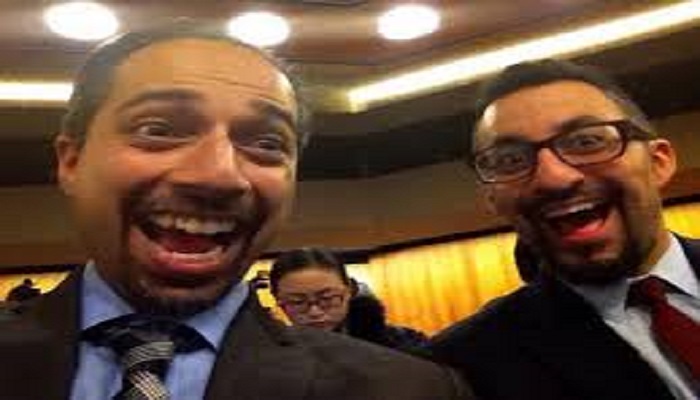 Trita Parsi has had close working relationship with Javad Zarif, when he was Iran’s Ambassador to the United Nations. In a deposition, Parsi stated he only communicated in 2006 with Zarif in order to “interview him.” But this is not true.
Emails made public demonstrate that Parsi and Zarif collaborated on numerous political issues. Parsi publicly distributed an Iranian regime document to influence US policy. He made arrangements for the ambassador to participate in a conference on Capitol Hill and to meet members of Congress, and sought the ambassador’s council regarding the feasibility of a new Persian Gulf security arrangement.
About the collusion between Parsi and Zarif, a former Associate Deputy Director of the FBI said Parsi should have been registered as a foreign agent of Iran. Arizona Senator Jon Kyl contacted the US Justice Department, urging an investigation of Parsi.

In an article published at the American Thinker titled “Friends of Iran in the United States” Michael Curtis studies Trita Parsi and his lobby firm, NIAC and how they are acting in favor of the mullahs by demanding annihilation of the nuclear related sanctions on Iran. Given the extent of activities by the Iranian lobby, the entire article is published below for our readers.

“On February 19, 2015, a full-page ad was published in the New York Times by the National Iranian American Council (NIAC) opposing the invitation given to Israeli prime minister Benjamin Netanyahu to speak before Congress.  It asked the question: “Will Congress side with our President or a Foreign Leader?”

The ad did not disclose that the founder and president of the organization, Trita Parsi, was an Iranian-Swedish citizen who holds a Green Card and has had links with Iranian authorities, especially the Iranian defense minister, Javad Zarif.  Those links were held to be extremely close by a critic, Hassan Daioleslam, an Iranian-American journalist and human rights activist who left Iran in 1981 and lives in Arizona.  He wrote that NIAC, and its leader Parsi, are an organization engaged in lobbying Congress on behalf of a foreign government – namely, that of Iran.

The invitation to Netanyahu and his speech to Congress became the occasion for dramatic political theater by Team Obama and its supporters, who disliked the Israeli’s criticism of the Obama administration’s attitude toward Iran.  Nothing was said by that team or in the mainstream media on the question of whether the NIAC had lobbied or tried to lobby Congress or had any impact on the current policy of the Obama administration in negotiating with Iran.

In his articles, Daioleslam (Dia) claimed that the NIAC, and former Congressman Bob Ney, who was associated with it, were helping Iran to manipulate U.S. policy on Iran’s behalf.  Among other issues, in 2007, the organization had lobbied to prevent U.S. funds going to democratic elements in Iran.  The NIAC brought a lawsuit in May 2008 in the attempt to halt Daioleslam’s further criticism of the Iranian regime.  But it delayed producing, and sometimes failed to produce, necessary information on its computers, calendar entries, and e-mails.  In addition, the assistant director of the NIAC changed some files from references to “lobbying” to “legislative direct.”

The U.S. District Court for the District of Columbia (Judge John Bates) in September 2012 dismissed the lawsuit.  The Court found that the NIAC had given false information to it, and it ordered the NIAC to pay Daioleslam’s legal expenses – about $184,000.  It held that the work of the NIAC and its founder, Trita Parsi, was not inconsistent with the idea that it was “first and foremost an advocate for the regime.”  Consequently, Daioleslam’s statement could not be considered defamatory.

The court in July 2010 had ordered NIAC three times to submit its server for inspection to determine if all documents had been given to it, and complained that additional computers in the network of the NIAC had not been produced.  The court found that the NIAC had withheld 5,500 e-mails written by its senior officials.  It is unclear whether this refusal or inability to produce documents was deliberate or result or incompetence.

The court held that the NIAC had “flouted multiple court orders” and taken “inexcusable” action in delaying delivery of documents to during the lawsuit that it had itself brought, and therefore had driven up the costs imposed on the Daioleslam.  It referred to the NAIC’s conduct as “dilatory, dishonest, and intransigent.”

Ironically, this case is somewhat similar to other events current in Washington where individuals have refused to provide or have misplaced official documents or have given incomplete records after requests by members of Congress for full documentation.

The Court did not finally decide if the NIAC had violated the U.S. Foreign Agents Registration Act (FARA).  The statute, enacted in 1938, requires that persons acting as agents of foreign authorities in a political or quasi-political capacity make periodic public disclosure of their relationship with a foreign entity.  Action of this kind is legally different from advocating better ties with a foreign entity, because this would be in the interests of the U.S.

The NIAC was founded in 2002 by Trita Parsi, who said it would enable Iranian-Americans to condemn the 9/11 attacks.  It is organized as a 501(c)(3) nonprofit organization and states that it is non-partisan and does not receive funds from the Iranian government or from the United States government.  It says it is dedicated to advancing the interests of the Iranian-American community on civic, cultural, and political issues.  It speaks on behalf of that community to which it refers as “one of the most highly educated minority groups in the U.S.”

The founder and president of the NIAC has been invited to the White House, has arranged meetings between the Iranian ambassador to the United Nations and members of Congress, and given talks at the CIA.  He has done so without registering as an agent of a foreign power.

The NIAC also expresses its “vision” to work to ensure that human rights are upheld in Iran and that civil rights are protected in the U.S.  It received funds, almost $200,000, from the National  Endowment for Democracy.

More significantly, the NIAC has pressed for an end to international sanctions on Iran.  The NIAC has also played a partisan role in U.S. and international politics.  It lobbied against the appointment of Dennis Ross to the National Security Council.  The documents revealed to the Court that Parsi had helped prepare reports about Iran and helped send them to Atieh Company in Tehran, which paid Parsi for his work.

One can only hope that the NIAC was not consulted in the current negotiations with Iran on nuclear issues.”