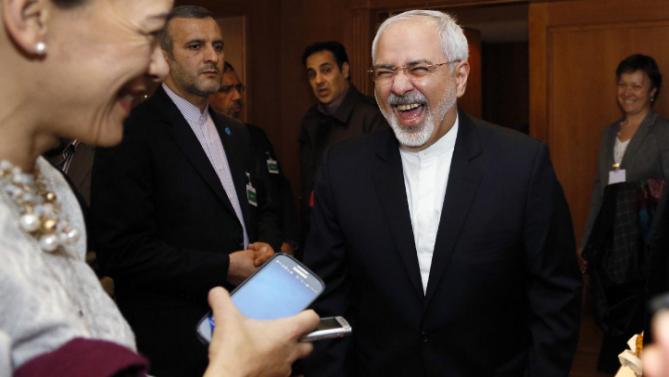 Trita Parsi Stays the Course of Covering for Iran Regime

Trita Parsi, the head of the National Iranian American Council, has been taking a victory lap of sorts with the announcement of an agreement between the P5+1 group of nations and the Iranian regime on nuclear weapons development.

His comments in news articles reminds us of the infamous “Mission Accomplished” moment of former President George W. Bush when he dramatically landed on a U.S. aircraft carrier to proclaim the war in Iraq was over and the U.S. had won; only to have the nation plunged into another decade of war against insurgents and local militias backed by Iran’s military.

The irony is too good to resist when we consider the clock is running now over the next two months for Congress to review an agreement and muster the votes necessary to override a certain veto by President Obama.

Plenty of time for Parsi to fall flat on his face.

But in reality, the only true validation of Parsi’s points will come simply by the Iranian regime’s actions. The choices the mullahs make will decide how much of a liar Parsi has become. Past history would seem to make the odds stacked heavily against Parsi.

The Iran regime lobby understands this and is pulling out all the stops to lobby Congress with the first step from the NIAC’s new formal lobbying arm (as opposed to the years-long informal lobbying it’s been doing) was to run a full page ad in the New York Times heralding the deal.

In an interview, Parsi warned that “make no mistake, if Congress rejects this good deal with Iran, there will be no better deal forthcoming and Congress will be left owning an unnecessary war.”

It’s an old argument and a silly one because the choices are not peace and war, but rather peace and war later since the restrictions on the regime’s weapons program and nuclear research end in five and 10 years respectively. Consequently – assuming Iranian regime doesn’t cheat – the next president will be faced with the exact same choices President Obama is faced with, except Iran will have nuclear weapons at that point and missile delivery systems.

All of which means, all we have done is postpone fighting with the Iran regime for a few years and allowed them to do what the North Koreans did with their agreement; cheat and build nuclear weapons in secret.

“We now know that the U.S. and Iran need not remain hostile enemies, but can interact with each other to achieve shared interests,” said Parsi in an interview with Glenn Greenwald in The Intercept.

Another Parsi talking point that alludes to the shared goals of fighting ISIS for example, but ignores the fact that Iran – as the world’s leading sponsor of global terror – does not share the same interests as the U.S. The evidence is abundant from providing IEDs to Shiite militias to kill American troops in Iraq to arresting and holding American citizens without trial in Iran; the mullahs do not share any common interests with the U.S. To expect a sudden change in the actions of a regime controlled by a small cadre of fanatically motivated mullahs is fanciful.

But that’s not all Parsi shills out.

“Saudi Arabia spends 13 times more money on its defense than Iran does. But somehow Iran, and not Saudi Arabia, is seen by the US as the potential aggressor,” Parsi said in Counterpunch.

Parsi has been using this erroneous stat since the mullahs demanded a lifting of the United Nations arms embargo. The fact that Parsi argued that the U.S. had to accommodate Iran by arming it unless it wanted to see talks end demonstrates his priorities, which is not pursuing peace, but buying arms for the mullahs.

What Parsi hopes no one discusses is the third path, the one the mullahs are terrified over because the choices are not really between peace and war. They are between war now or war later under this deal, but the third option is the one practiced by U.S. presidents since the end of World War II and that is the option of “containment.”

It is a policy that led to the dramatic reduction in nuclear arms resulting from the original SALT and later START treaties; examples that the P5+1 unfortunately choose not to follow.

It is a policy that we will examine more fully next time.