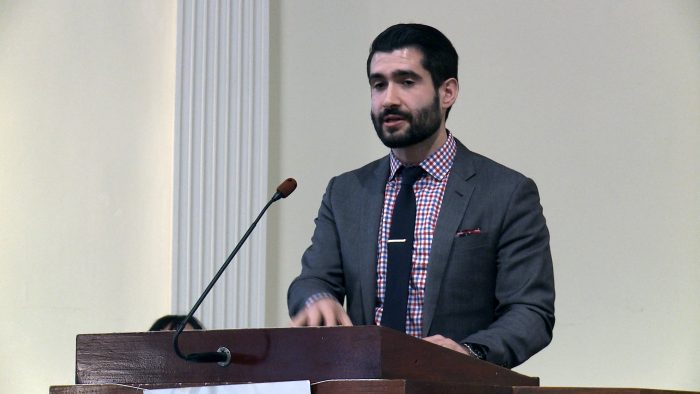 Trita Parsi Stepping Down But Is He Going Away?

Our old friend, Trita Parsi, founder of the National Iranian American Council and chief cheerleader for the Iranian regime, announced he was leaving the post of president and turning the reins over to Jamal Abdi, NIAC’s current vice president for policy and head of its NIAC Action lobbying front.

Should we shed a tear or let out a cheer that the nemesis of Mideast peace is transitioning out?

Probably neither since his departure from NIAC is probably less about stepping away from publicly lobbying for the Iranian regime and more about removing the bulls-eye target that has been affixed to him for the past decade.

Parsi personifies the strengths and weaknesses of the Iran lobby in the U.S. He is educated and has the ability to speak in academic circles by convoluting historical events with twisted assumptions about what they mean.

He understands the soft spots of American democracy and the rise of political correctness and progressivism and parlays them to his advantage by catering to populist messages that support Iran without asking any tough questions.

In the Obama administration, he found kindred spirits and was able to translate that into unprecedented access to the White House—with visitor logs showing a stupefying nearly three dozen visits leading to the run-up of the Iran nuclear deal, which amounted to the high-water mark of his tenure.

But like his would-be masters in Tehran, Parsi was trapped by his own dogged refusal to ever find fault with the regime’s actions never let even the most horrific atrocities committed by Iran or its proxies divert him from his cause of supporting Tehran.

The use of chemical weapons to gas scores of Syrian men, women and children—twice—failed to move him to condemn the Iranian regime.

The snatching of dual citizens from the U.S., Great Britain, Canada and other countries wasn’t enough to get Parsi off his regime wagon train; even when one of them was a putative friend of his.

Over 17 years, Parsi has worked hard off a blueprint he envisioned of creating a strong PR machine designed to give the Iranian regime a moderate face and lobby U.S. decision makers on giving the mullahs in Tehran a break.

“Give peace a chance” became more than a slogan for Parsi and the NIAC, it became a mantra to steer U.S. foreign policy into one of the most disastrous decisions ever: a nuclear deal that came with no strings attached for human rights violations, sponsorship of terrorism, funding of proxy wars in neighboring countries and development of a crash ballistic missile program that would make North Korea look like an Erector-Set toy.

What was Parsi able to gain in return for his partners in Tehran? A cash windfall of billions of dollars in repatriated money, opening the global market for Iranian oil and invite scores of European and Asian companies to lock up investment deals.

What did the world get in return? A postponement, but not an eradication of Iran’s nuclear capabilities. A full-blown civil war in Syria creating four million refugees and killing over 400,000 men, women, and children. Destabilization in Yemen and Iraq and the threat of a full-blown war between Israel and Saudi Arabia with Iran.

That’s quite a butcher’s bill for Parsi and his promise of moderation.

Now Parsi is handing off the NIAC to Jamal Abdi, a man who has spent years working his way into the political warrens of Capitol Hill and influencing policy towards moderating views about Tehran. Alongside his fellow cohorts including Reza Marashi, Tyler Cullis, and Ryan Costello, Abdi helped Parsi flog his untruths and even spearheaded the creation of NIAC Action, the formal lobbying arm of the NIAC.

The creation of NIAC Action and the installation of Abdi as its first leader is no accident. The open secret that NIAC was lobbying on behalf of Iranian interests finally became too hard to sweep under a carpet and the NIAC had to come out into the sunlight as an official lobbying force (paradoxically neither NIAC Action or Abdi are registered with the House of Senate lobbying disclosure databases).

Of course, Parsi is not leaving the baby he gave birth to. His announcement on the NIAC website states he will turn over power on August 1, 2018, but he intends to “continue to be involved and fully committed to the organization but through a different role.”

And what role would that be? It’s too much to hope for that Parsi would simply exit the stage he left in tatters as the Trump administration has killed the Iran nuclear deal he worked so hard to secure and a deluge of global companies have announced decisions to back out of contracts with the Iranian regime as renewed U.S. economic sanctions loom large.

Not even the wailing of European interests about trying to salvage the deal through a European Union-only coalition will be enough to safeguard the Iranian regime.

Even the Iran Parsi promised is just a mirage. The mullahs are under tremendous pressure back home from unrelenting and broad protests that they have met with brutal suppression and efforts to ban messaging apps such as the popular Telegram.

Iran’s economy is reeling, its currency sinking to an all-time low and a united front is now on the horizon in forming policies to block Iranian expansionism.

About the only thing left Parsi has to show for all of his efforts now is a photo of him shaking hands with a smiling Mohammad Javad Zarif, Iran’s foreign minister, in the wake of the nuclear deal.

How fast things have changed for the Iran lobby in just a year.