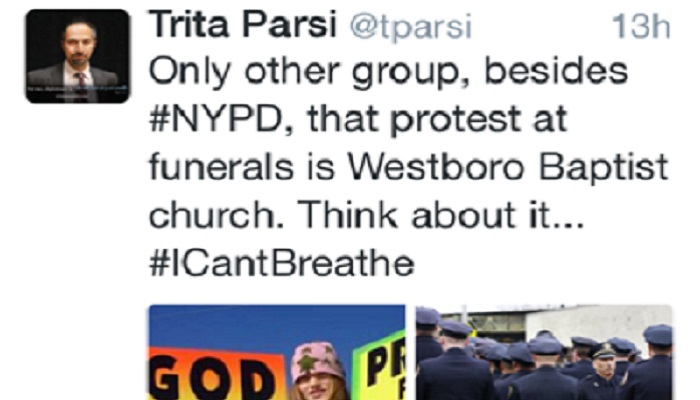 If anyone wanted to start off 2015 with a bang, it would seem Trita Parsi, the head of the National Iranian American Council and one of the Iranian regime’s chief cheerleaders, decided to throw all caution to the wind when he tweeted out:

Only other group, besides #NYPD, that protest at funerals is Westboro Baptist church. Think about it… #ICantBreathe

It is a twisted sort of pretzel logic, even for Parsi, but worthy of his past statements on behalf of Iran during the past two years of fruitless negotiations overs nuclear weapons. His statements that Iran was only desirous of peaceful nuclear development flew in the face of near continuous acts of military intervention and terrorist group support and brutal human rights crackdowns during the same period.

For a man who has been almost single-handedly carrying the political and PR water for Iran’s mullahs, it’s an odd tweet to make since it has little to do with Iran and nothing to do with nuclear arms it seems on the surface, but it does fall in line with similar criticisms echoed by Iran’s Supreme Leader Ayatollah Ali Khamenei who delighted in criticizing the US over recent racial protests in Ferguson, Missouri.

But when we consider the incredible shrinking island of support for Parsi’s positions, it’s more easily understood why he chose to make such an odd and discordant tweet. After two years of failed negotiations, largely due to Khamenei’s obstinate loyalty to his own hardline positions, bipartisan support in Congress for an Iranian nuclear deal negotiated by President Obama and Secretary of State John Kerry has largely evaporated, especially in the wake of the midterm elections.

If anything has become abundantly clear in the new incoming Congress, about the only vocal and public support for Parsi’s positions lie within a small and highly liberal wing of the Democratic Party. Hence, Parsi’s hard shift to the left in the hope of currying more favor with the few American politicians willing to support a deal with Iran.

Supporting increased economic sanctions against Iran and holding Iran regime’s religious and political leadership for its dismal human rights record and sponsorship of terrorism abroad has gained even more bipartisan support as Democrats such as Sen. Bob Menendez and Republicans such as Rep. Ed Royce have consistently and loudly decried any potential deal that leaves Iran with the capacity to develop nuclear weapons.

It’s against this backdrop that any casual perusal of Parsi’s Twitter feed will show this evolution of politics in to increased attacks on the U.S. military and its allies and criticism of police departments.

If the stakes for a nuclear weren’t so high, it would be easy to dismiss Parsi’s tweets as the increasingly desperate rants of paid-for PR flaks which are losing their audience and impact. We can only hope his influence will be just as effective in securing a nuclear deal as it’s been the past two years…zero.