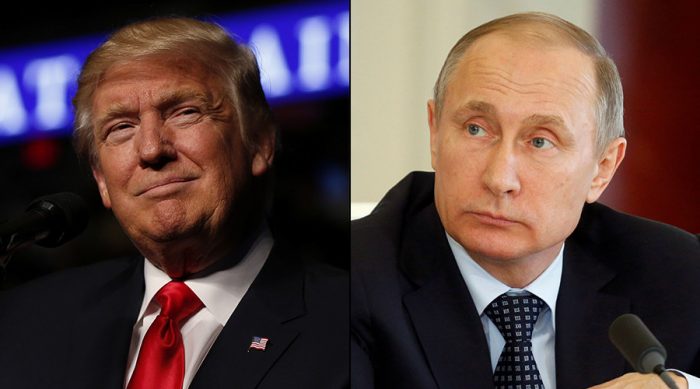 Donald Trump hasn’t even been inaugurated yet and his effect on U.S. foreign policy is already being felt throughout the Middle East:

A much ballyhooed summit is planned in the Kazakhstan capital of Astana this weekend to discuss a pathway for peaceful resolution of the Syrian conflict, involving Russia, Iran and Turkey, but now Iran is protesting Russia’s proposal to include the U.S. in these talks once Trump assumes office.

Iranian regime foreign minister Javad Zarif stated the regime’s opposition to the U.S. participating in what the regime hoped would be a photo opp moment in the diplomatic limelight for the mullahs in Tehran with these talks.

“We have not invited the U.S. and oppose their presence” at the talks, Zarif said, according to Iran’s Press TV.

Whether Iran would refuse to attend if the United States were invited was not immediately clear. The talks are part of a three-way process led by Russia and including Turkey and Iran — now the three most powerful international players on the ground in Syria. The process is aimed at forging a settlement in Syria after the failure of the Obama administration’s diplomacy, according to the Washington Post.

The opening round is expected to be a modest affair, with representatives of Syrian rebels meeting with members of the Syrian government to discuss the modalities of a shaky cease-fire that went into effect on Dec. 29, Russian Foreign Minister Sergei Lavrov told reporters in Moscow. Representatives of the invited countries will attend in the role of observers, rather than participants.

Although Iran is one of the three sponsors of the peace talks, it has not signed the agreement reached between Russia and Turkey that launched the cease-fire, suggesting that Tehran has reservations about an effort that could potentially erode its extensive influence in Syria.

Both Trump and Russian President Vladimir Putin have said they regard Syria as one of the areas in which the United States and Russia could cooperate more closely. Trump has said on a number of occasions that he hopes better relations with Moscow will help counterbalance Iran’s expanding regional role.

That expansion and deepening relationship between Russia and the U.S. could very well leave the Iranian regime out in the cold and without the ability to leverage the two superpowers against each other for its own gain.

Iran has been instrumental in providing the manpower and resources that have helped Assad’s government hold the rebellion at bay. Thousands of Iranian-trained Shiite militia fighters from Iraq and Afghanistan are on the front lines, the Iranian-backed Lebanese Shiite militia Hezbollah is at the forefront of most of the major battles, and Iranian military advisers and commanders are embedded with them in many locations around the country.

All of those gains could be erased should Trump and Putin see eye-to-eye on the necessity to rein in Islamic extremism and view Iran as the regional godfather of radicalized Islamic terror.

That prospect is frankly freaking out the Iranian regime and Hassan Rouhani took to state-owned airwaves to try and keep its attachment to Russia as close as Siamese twins.

“Iran, Russia and Turkey managed to bring a ceasefire to Syria … It shows these three powers have influence,” Rouhani said. “The (Syrian) armed groups have accepted the invitation of these three countries and are going to Astana.”

Asked why the United States and Saudi Arabia had no direct role in the talks, Rouhani said: “Some countries are not attending the talks, and their role was destructive. They were helping the terrorists.”

The prospect of a Trump presidency and realignment with Russia has caused the mullahs to issue pronouncements on a daily basis to try and spin the potential outcomes for the regime after January 20th; most of them bad for the mullahs.

Rouhani went on television to insist that any effort to “renegotiate” the nuclear agreement by Trump is “meaningless” and attributed it simply to Trump making campaign slogans, while his boss, Ali Khamenei, insisted that if the U.S. were to alter the agreement “we will light it on fire.”

Even European Union leaders are coming to the realization that the outcomes over the nuclear deal no longer rely on them, but rather now rest firmly on Trump’s decisions.

Federica Mogherini, the EU high representative for foreign affairs and security policy, who received withering criticism for trips to Iran while political prisoners were being executed, penned an editorial in the Guardian praising the nuclear deal in the hope of staving off its elimination.

It is worthy to note that Mogherini places her support squarely on the economic benefits towards European firms, but makes no mention of the year of terrorism and human rights abuses perpetrated by the Iranian regime and is silent on Syria and the absolute disaster for Europe from millions of refugees that has flooded in.

That kind of silence on important issues of terrorism and war are precisely why Europe has been blistered with multiple attacks in Brussels, Paris, Nice and Berlin and why solving the problem of Iran’s Islamic extremism is the surest path to peace.