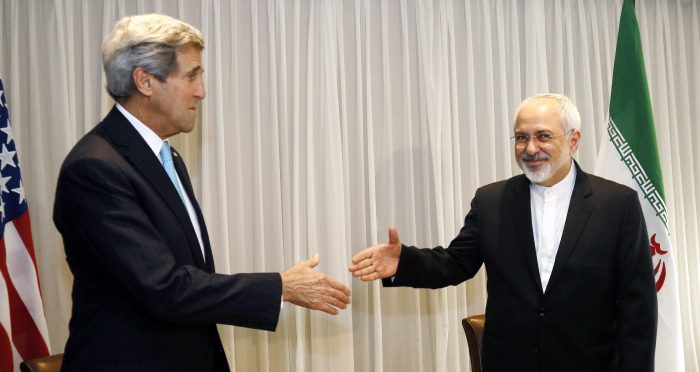 U.S. Secretary of State John Kerry shakes hands with Iranian Foreign Minister Mohammad Javad Zarif before a meeting in Geneva January 14, 2015. Zarif said on Wednesday that his meeting with Kerry was important to see if progress could be made in narrowing differences on his country’s disputed nuclear program. REUTERS/Rick Wilking (SWITZERLAND – Tags: POLITICS) – RTR4LDZW

Two years ago, President Barack Obama was lauding a landmark nuclear deal, while the image of Iran’s foreign minister, Javid Zarif, shaking hands with U.S. officials was beamed around the world by a global news media largely snookered by the Iran lobby into believing that the Iranian regime had turned the corner and could be trusted as a responsible member of the international community.

What a difference two year’s make.

The world has witnessed the Middle East plunge into chaos with a body count in Syria alone reaching 400,000 dead and four million displaced as refugees. Conflicts rage from the Mediterranean to the Indian Ocean with the threat of wider wars now appearing on the horizon in Pakistan, Saudi Arabia and around the Persian Gulf.

More importantly, conflict is not only confined to the battlefields with armies and proxies, but has been stretched by Iran’s introduction of intercontinental ballistic missiles that can now reach well into Europe, Asia and Africa.

Combine that threat with the insidious rise of North Korea’s own mushrooming missile launches and the world is now faced with missile threats from both sides of the planet controlled by autocratic regimes that have shown a complete disregard for the value of human life.

The picture is bleak and the reason for it rests largely on what the Iran nuclear deal failed to accomplish which is to alter the behavior of a regime controlled by mullahs in Tehran who viewed the deal as a windfall energizing their faltering government.

The Obama administration slowly and inexorably whittled away concession after concession at the request of the mullahs and recast the nuclear deal in evolving terms that changed its nature from a potential instrument of regime change to little more than a slight postponement in the regime’s plans for regional domination.

In the annals of international diplomacy, it has vaulted to rank near the Munich agreement that Nazi Germany’s Adolf Hitler brokered that gave away Austria in terms of futility.

The central conceit of the Iran lobby was that the nuclear agreement would bring Iranian regime back into the fold of civilized nations and empower the “moderate” elements within the government; none of which has come to pass. If anything, the reactionary, cold-blooded mullahs have demonstrated they remain firmly and clearly in control of the levers of powers and were only emboldened by the agreement.

For top mullahs Ali Khamenei, the nuclear agreement only confirmed in his mind that the Obama administration was less concerned about restraining Iran than in securing a historical legacy for the president. Obama showed his inclination to avoid confrontation with Iran and his willingness to compromise on any issue:

In each case, the Iranian regime was allowed to lift restrictions from some of its more problematic activities such as its missile program, but most importantly, it eliminated “consequences” for the regime’s actions.

The nuclear deal was a badly flawed document because there were no mechanisms to adequately punish the regime for breaking the agreement since it reaps virtually all of its benefits—namely cash—from the outset.

Now the Trump administration is faced with having to live with the consequences of this deal, specifically whether or not to renew another 90-day compliance finding for the JCPOA, as the agreement is called, to Congress.

President Trump is likely to renew the compliance finding since his administration is in the midst of a policy review for Iran, as well as engaging Iranian-backed militia units on the battlefield in Syria.

If Trump does state Iran is in compliance, it would be his second time since taking office in January to do so despite his promise during the 2016 campaign to “rip up” what he called “the worst deal ever,” according to Reuters.

What is troubling are recent reports from German intelligence agencies that the Iranian regime is still actively seeking components used in nuclear weapons manufacturing and research. This and other disturbing actions by the regime over the past two years point to a pattern that the mullahs are still actively and aggressively seeking to build their nuclear program.

The advanced ramp up of its ballistic missile program mirrors the same crash program North Korea pursued in developing its nuclear and missile programs.

None of this stopped the Iran lobby from praising the anniversary of the nuclear deal as the National Iranian American Council issued a self-congratulatory press statement and criticized efforts to dismantle the agreement:

“Unfortunately, however, the JCPOA remains under attack from elements within both countries that prefer conflict over dialogue and mutual suspicion over greater understanding. Continued sanctions, calls from the White House for nations to refrain from investing in Iran, and an increase in military encounters between the US and Iran all threaten the deal. The JCPOA represented an opportunity for the US and Iran to change course, broaden engagement and end the policy of sanctions and antagonism. Unfortunately that opportunity has largely been squandered,” said Trita Parsi, head of the NIAC.

On the second anniversary of the Iran Deal, the remarks to dub the flawed deal, as a good deal continues, by the Iran Lobby. It is indeed time to rid Washington from the Iranian regimes lobbies such as NIAC and from people like Trita Parsi.