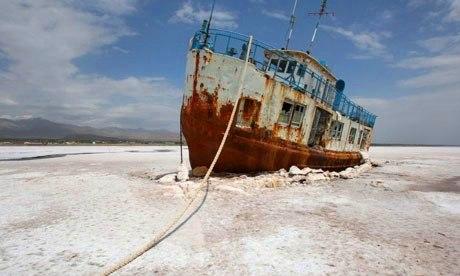 As world leaders gathered this week in a Paris still suffering from the after effects on a series of bloody terrorist attacks for a global summit on climate change, one of the more controversial side topics to erupt from it was the claim of a linkage between the planet’s extreme weather changes and the rise in extremist terror around the world.

The world’s news media have been filled with analysis and debate, which has filtered over into the U.S. presidential campaign as well. Evan Halper in the Los Angeles Times recaps some of that debate as the issue has been promoted by luminaries such as Britain’s Prince Charles and denounced by Rupert Murdoch’s Sun newspaper.

The linkage from proponents comes from the idea that global warming has shifted weather patterns to such an extent that crop failures and long-term drought have led to deprivation of impacted regions of the globe that have lent themselves to the spawning of extremist groups initially intent on acquiring limited resources such as food, water and arable land to curry the favor and recruitment of desperate people.

One case in point has been the building debate over root causes of the Syrian civil war, which some climate activists have claimed had its start in a decade-long drought that caused the mass migration of some 1.5 million people out of farming areas and into refugee status and provided a fertile recruiting group for extremist groups.

The complexity of such a debate must also take into account issues of religion, politics, economics and even personal graft and greed; all issues of pressing relevance throughout the Middle East and developing world.

But the Iran lobby and the Iran regime have been quick to latch onto this theory as an alternative rise in Islamic extremism and put some distance between the mullahs in Tehran to terror groups and terrorist activities they have historically supported such as Hezbollah in Lebanon and Syria and the Houthis in Yemen.

The regime was so intent on fostering this idea that it sent Masoumeh Ebtekar, head of its Department of Environment, to Paris to speak on the sidelines of the global climate summit and gave her remarks broad play in state-run media.

But even when the topic is rising temperatures, the mullahs could not miss out on any opportunity to voice their time worn demand for the immediate lifting of all sanctions against it by having Ebtekar make the promise that the regime would cut its greenhouse emissions by 4 percent and increase those cuts to 12 percent if sanctions are fully lifted.

“I wish to urge the UN system to initiate an assessment on the carbon footprints of war, conflicts, security and terrorism,” Ebtekar said. “Those perpetuating conflicts are in fact accomplices of the global warming process.”

It’s an interesting statement to make from the regime’s leadership considering that their gross mismanagement has turned what was once called the cradle of civilization into what is arguably now one of the greatest environmental disasters on the planet.

Tehran has been rated one of the most polluted cities in the world with cars and buses using mostly leaded gasoline, which is heavily subsidized by the regime in order to quell a restive population, but which has the unfortunate side effect at negating any effort to conserve and leads to profligate and highly inefficient traffic patterns.

Its traffic management systems are virtually non-existent with little to no vehicle inspection, mobile emission testing or controls and a government bureaucracy so corrupted by the mullahs nepotism and favoritism that the wealthy children of mullahs and those aligned with the Revolutionary Guards Corps are often seen tooling around in gas guzzling Lamborghinis and Ferraris.

The rural parts of Iran suffer from large-scale overgrazing and growing desertification and deforestation turning large swathes of the country into desert dunes, while industrial and urban wastewater runoff has contaminated most rivers, coastal areas and underground aquifers.

The World Bank estimates that losses inflicted on the regime economy as a result of deaths coming from air pollution alone reach $640 million or 0.57 of total gross domestic product for the entire nation, while the UN Environment Program ranked Iran 117th among 133 countries in terms of environmental indexes.

One example of the environmental mismanagement of the regime is the drying up of Lake Urmia in the northwest of Iran, which has shrunk a stunning 70 percent and is in danger of permanently disappearing after being the sixth largest saltwater lake in the world.

Things are so bad that Iran generates an estimated 50,000 tons of trash every day with only 70 percent of it disposed of safely and an even smaller amount redirected into reuse and recycling. The rest of the garbage finds its way into the country’s waterways and forests. Iran ranked worst in the world for soil erosion as well in 2011.

The degradation of Iran’s environment has led to mass discontent throughout the nation as the country’s environmental activists have taken to protesting the mullahs’ mismanagement much in the same way Iranian dissidents protested human rights violations.

The failure of Hassan Rouhani to live up to campaign promises to clean up the environment have led to top mullah Ali Khamenei to issue his own 15-point list of policy directives to staunch some of these problems. In reading the policy directive, one could almost envision it being a verbatim policy paper written by the Obama administration’s Environmental Protection Agency as it calls for lofty goals such as “bilateral, multilateral, regional and international partnerships and targeted cooperation in the environmental field.”

But no matter how many “laterals” the regime undertakes, what is abundantly apparent is that the regime is more concerned about practical political and military matters than environmental ones as it spends much of its treasury on supporting terror groups and the proxy wars in Syria, Iraq and Yemen.

If President Obama is correct and extremist terrorism is given its birthplace out of the degraded environments of regions plagued by drought and famine, then Iranian regime’s dismal environmental management has certainly produced bumper harvests of terrorists and violence.