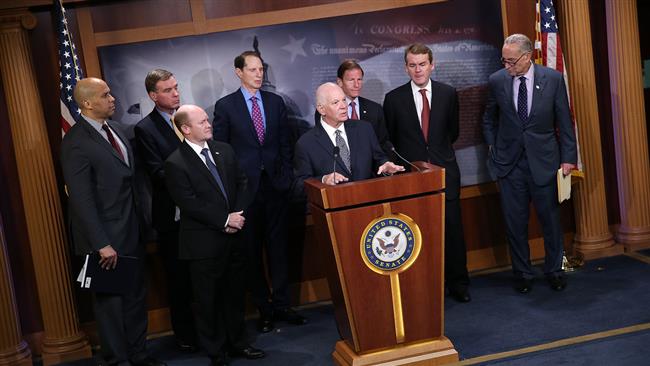 The experiment to see if the Iranian regime could be moved to join the community of nations and act in a moderate manner is officially over with the unanimous passage of the extension for renewal of the Iran Sanctions Act (ISA).

The U.S. Senate passed a 10-year extension of sanctions against the Iranian regime, following a similar vote in the House, sending the bill to President Obama’s desk where he is expected to sign it.

The measure passed by a 99-0 vote after passing the House with only one dissenting vote in a bipartisan display of unity among Democrats and Republicans rarely seen in Washington.

Without the votes, the ISA was due to expire on December 31st. Leaders of both parties and the U.S. State Department have said passage of the extension would not violate the terms of the current nuclear agreement with Iran, even though the Iranian regime has threatened harsh retaliation in response.

“Extending the Iran Sanctions Act … ensures President-elect Trump and his administration have the tools necessary to push back against the regime’s hostile actions,” Corker said in a statement.

“Given Iran’s continued pattern of aggression and the country’s persistent efforts to expand its sphere of influence across the region, preserving these sanctions is critical,” the Senate majority leader, Mitch McConnell of Kentucky, said on Thursday. He said he expected the Trump administration and the new Congress to “undertake a total review of our overall Iran policy.”

As the U.S. legislation advanced, Iranian regime officials said that the country may increase its stockpile of enriched uranium, a move that could spark a new international crisis in the weeks before Donald Trump takes office.

“Iran has made necessary preparations for potential U.S. decisions about the extension of sanctions,” the head of Iran’s Atomic Energy Organization, Ali Akbar Salehi, said Monday, according to Iranian state media.

The threats are not surprising since top mullah Ali Khamenei has been making regular threats about tearing up the agreement even during negotiations last year.

What has changed though is that the gravy train of appeasement policies coming from the Obama administration in the hopes of moderating Iranian behavior probably has come to an end. The stunning majorities in passing the renewal demonstrate both political parties desire to taker tougher stand against Iran especially as yet another potential terror-related attack occurred on the campus of Ohio State University.

“The practical effect is the Iran nuclear agreement depends on our resolve, on our commitment to… stop a nuclear-armed Iran by using sanctions and other means if necessary,” said Sen. Richard Blumenthal (D-CT), who supported the Iran deal.

The passage marks just how far American opinion has swung over the past year in which the Iran lobby trumpeted the nuclear agreement as a landmark effort to bring the U.S. and Iran closer together only to see the Iranian regime launch three wars, arrest American citizens and threaten the U.S. with military confrontations almost everywhere throughout the Middle East.

Iranian regime’s actions have only grown worse under the nuclear agreement and the 99-0 vote is a recognition that more needs to be done to confront Iranian extremism and push back on it even as the mullahs devise new ways to sow chaos and confrontation.

One example of those methods came in the form of a new report issued by Conflict Armament Research (CAR), an independent research group, which tied markings on munitions used by Houthi rebels in Yemen to arms shipments from Iran.

The markings found on rifles, rocket launchers, anti-tank guided missiles and munitions provided some of the more concrete evidence to date of Iranian regime’s logistical support to Houthis fighting in Yemen’s nearly two-year-old civil war, according to the Washington Post.

Vice Admiral Kevin M. Donegan, the commander of U.S. Naval Forces in the region, told reporters that the first of the five weapons shipments were seized in April 2015. CAR’s report focuses on three weapon caches recovered in early 2016.

“CAR’s analysis of the seized materiel … suggests the existence of a weapon pipeline extending from Iran to Somalia and Yemen, which involves the transfer, by dhow, of significant quantities of Iranian-manufactured weapons and weapons that plausibly derive from Iranian stockpiles,” the report says.

A Somalia-bound dhow was stopped with 2,197 weapons onboard. Aside from a smattering of small arms including Kalashnikovs and medium machine guns, the vessel was laden with roughly 100 Iranian-made RPG-7-style rocket launchers.

While the Iran lobby continues to try and discount the votes on ISA, they ignore the unanimous majorities it garnered for its passage. Most disturbing for Iranian regime sympathizers such as the National Iranian American Council is how far the pendulum has swung away from appeasing the regime to finding ways to hold it accountable.