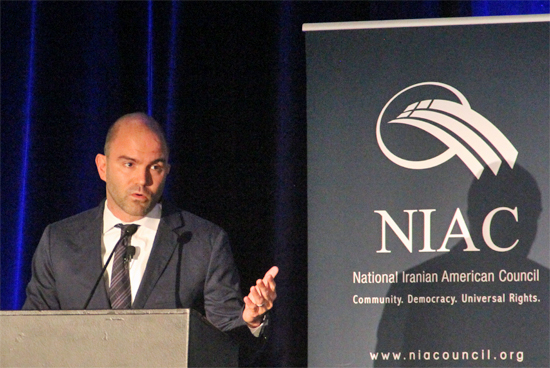 Warnings Not to Soften on Iran Regime Mount

One of the more interesting aspects of the transition in the White House has been the lack of support the Iran lobby receives. During the Obama administration, key Iran lobbyists such as Trita Parsi of the National Iranian American Council had almost unfettered access to the White House; visiting as often as insurance lobbyists during the Obamacare debate.

Key administration staffers helped construct the much-debated “echo chamber” to lend support for the debate about the Iran nuclear deal and help influence the news media with so-called strategic analysts to place editorials and appear on newscasts promoting the agreement.

Even former NIAC staffers were hired to fill key positions in the State Department and National Security Council much to the consternation of long-time critics of the Iranian regime who warned of the conflicts of interest stemming from having staffers with close ties to the Iranian regime overseeing U.S. policy on Iran.

The changeover in administrations not only significantly reduced the influence and clout of the Iran lobby, it also encouraged closer scrutiny and questioning of not only the Iran lobby’s positions, but also the thinking that went into the appeasement policies of the Obama administration.

The world has had the benefit of hindsight after two years since the nuclear deal was signed and has clearly seen that the Iranian regime is now the most destabilizing force in the Middle East with the eruption of proxy wars, terror incidents and deployments of new weapons on a large scale.

The proof of how false the Iran lobby’s arguments were has been on display the past two years and there is little debate about Iran being at the center of the woes besetting the region. This has led to an emboldened Iranian resistance movement, as well as open criticism of Iran with little defense of the regime from the Iran lobby.

The wave of social media posts, editorial commentary and press releases by groups such as NIAC have fallen precipitously as Iran’s actions have clearly blown them out of the water, though are now trying to prevent policy changes against the regime, namely the black listing of the Islamic Revolutionary Guards Corps, the main vehicle behind its terrorist activities and its interferences in Iraq, Syria, Yemen, etc.

That criticism is now coming from all quarters as the Iranian opposition movement has gathered steam—culminating in the massive rally in Paris of the leading Iranian dissident groups totaling over 100,000 people with a global parade of nations all criticizing the mullahs in Tehran earlier this month.

In the U.S. Congress, the bipartisan support for the imposition of new economic sanctions on Iranian regime for its ballistic missile program grows each day, alongside calls by Senators on the Trump administration and Secretary of State Rex Tillerson not to certify the Iranian regime being in compliance with the nuclear agreement.

“We believe that a change in that policy is long overdue,” Arkansas Republican Sen. Tom Cotton and three colleagues wrote to Tillerson in a letter Tuesday.

“In light of Iran’s malign actions since the signing of the [nuclear deal], the only reasonable conclusion is that the full suspension of U.S. sanctions is not in the vital national security interests of the United States and that Iran has consistently violated the terms of the [nuclear deal].”

Under federal law, a finding that Iran is not complying with the deal — the certification must take place every 90 days — would set the stage for “an expedited process for Congress to rapidly restore its sanctions.” Cotton and the other senators said that time has come.

They cited several violations, including Iran’s refusal to allow international inspectors to access their research and military facilities, and exceeding limits on water stocks needed to create a plutonium pathway for nuclear weapons.

Weekly Standard reporter Benjamin Weinthal revealed Friday that recent reports by German intelligence agencies show that Iran is still attempting to procure illicit nuclear technology, such as specialized valves that can be used in the heavy water reactor in Arak.

Weinthal cited a report by the state of Hamburg in northern Germany which said “there is no evidence of a complete about-face in Iran’s atomic policies in 2016” after the announcement of the U.S.-brokered nuclear deal.

Iran is still seeking “products and scientific know-how for the field of developing weapons of mass destruction as well (as) missile technology,” the report claimed.

The Hamburg report also listed “49 separate instances of Iran engaging in illegal procurement and terrorist activities, such as cyberwarfare, espionage, and support for the terrorist group Hezbollah,” according to The Tower.

Another intelligence report by the state of Baden-Württemberg described Iran’s use of foreign import-export firms to obtain equipment that can be used for illicit nuclear activities.

Additional reporting recently indicated that Iran was building additional missile manufacturing facilities in Syria which raises the ugly specter that Iran could marry its ballistic missiles with Syria’s chemical weapons stocks that were never destroyed as part of the much-maligned compromise brokered by Russia that persuaded President Obama not to cross his infamous “red line.”

The only good thing coming out of this summer may be the fact that the Iran lobby is shrinking in influence and importance and that is a positive development.