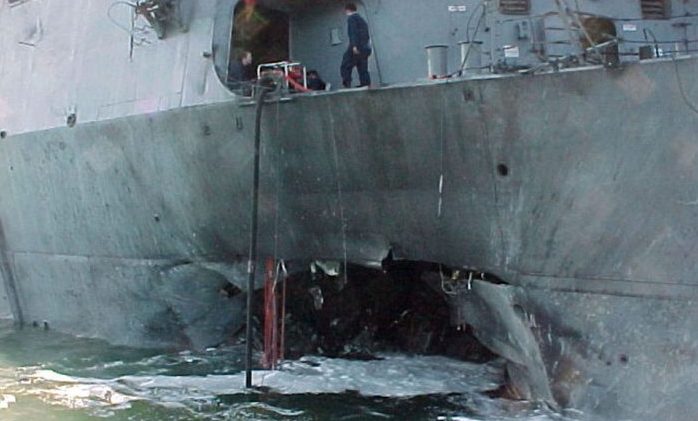 Week of Living Dangerously in Persian Gulf By Iran Regime

A lot can happen in one week. According to the Bible, God created the heavens and earth and all the creatures in just a week’s time. You can have half of an Olympic Games run in one week.

For the Iranian regime, one week is enough time to create an international crisis in the Persian Gulf and threaten to spark a shooting war with the U.S. Navy.

The week started out on Tuesday with the Iranian regime’s Revolutionary Guard Corps sending several ships to harass the U.S. Navy destroyer Nitze by closing at high rates of speed, then veering off and returning again.

The Arleigh Burke-class destroyer issued several warnings including radioed messages, fired flares and whistles at the regime ships which did not respond as it transited international waters; well away from Iranian waters. A Navy spokesman described the Iranian maneuvers as “unsafe and unprofessional.”

That incident was followed on Wednesday by another one in which three IRGC ships approached the U.S. coastal patrol ships Squall and Tempest at high speed in the northern Persian Gulf.

According to the Washington Post, “later in the day, an Iranian vessel came within 200 yards of the Tempest. After the Tempest shot flares and tried to communicate using the ship’s loudspeaker, Squall personnel fired three shots into the water from that ship’s .50-caliber gun. The Iranian ship then departed.”

That same Iranian ship later approached the USS Stout, a guided-missile destroyer, later Wednesday. “The [IRGC] vessel proceeded to cross the bow of the Stout at close range on three separate occasions,” said William Urban, a spokesman for the U.S. 5th Fleet.

Responding to a U.S. complaint, the Iranian regime rejected the American version of events. The defense minister, Brig. Gen. Hossein Dehghan, said in remarks quoted by the state news media that the Iranian boats patrolled only Iran’s territorial waters and had a mission to “counter any unintentional or aggressive intrusion.”

“If an American ship enters Iran’s maritime region, it will definitely get a warning. We will monitor them and, if they violate our waters, we will confront them,” Dehghan said in a statement reported by the Iranian Students’ News Agency.

It clearly shows the regime’s intentions of antagonizing the U.S. at a time when the Iran lobby had promised a new era of cooperation following the Iran nuclear deal.

Obama administration officials say Iran has abided by its commitments on the nuclear program, but there have been few signs of change in Iranian regime’s behavior in other arenas, including tensions in the Persian Gulf, clashes with U.S. allies in the region and the civil wars in Syria and Yemen.

Congressional Republicans and critical private analysts have been angry about this behavior since late last year, when the Islamic republic conducted two tests of nuclear-capable ballistic missiles in defiance of U.N. sanctions and then staged a live-fire exercise dangerously close to a U.S. warship in the Persian Gulf.

The situation worsened in January, when the Iranian regime detained 10 U.S. Navy sailors whose boats had drifted mistakenly into Iranian waters in the Gulf.

“Iran is on a roll, and the perception is that the administration is getting rolled at this moment,” Mr. Royce said in January. “We need to see more backbone, not backing down.”

Revelations this month of how the Obama administration worked out a $1.7 billion settlement of a failed Iranian missile sale in January at virtually the same time as the release of five American prisoners held in Iran has only fueled criticism that the Obama administration is overlooking continued misbehavior by Tehran to preserve the nuclear deal.

Stephen Bryen, a senior fellow in defense studies at the American Foreign Policy Council, authored an editorial in U.S. News and World Report, in which he criticizes the administration’s oddly held belief that somehow the Iranian regime can still be a friend to the U.S.

“This view, strongly held by the White House, State Department, Pentagon and CIA, is a true fantasy. … Washington persists in fostering the illusion. There is no immediate cure for a political disease: We have yet to invent an anti-regime-biotic that, when injected into the insane, returns them to normalcy,” Bryen writes.

“As there is no solution, the Obama administration will explain the Persian Gulf incident as some sort of aberration or unauthorized action by the Iranian Revolutionary Guards, or a mistake, but not an act of overt hostility,” he adds.

More darkly, he raises the specter that the Iranian regime is merely testing a “swarming boat attack” tactic to learn how they might fling multiple small, fast attack boats at much larger U.S. warships.

“Recently the Iranians added another dimension to the swarming boats: a vessel known as the Ya Mahdi, a remotely piloted fast patrol boat that can fire rockets or be stuffed with explosives. It is a new version of the boat that attacked the USS Cole in Aden in 2000 at a cost of 17 lives, 39 injuries and severe damage to the ship,” Bryen warns.

Criticism from the White House is sorely lacking as these provocations increase. One explanation may be the announcement that Ben Rhodes, the national security advisor who created the so-called “echo chamber” of support for the Iranian regime and nuclear deal, is now scheduled to keynote a conference sponsored by Iran lobby loyalist, the National Iranian American Council.

Outside organizations such as NIAC and the Ploughshares Fund, which is co-sponsoring the upcoming conference, were cited as key parts of the White House’s effort to mislead the public about the deal.

The NIAC event is being viewed as another sign that the White House is seeking to boost these organizations in return for their efforts to push the nuclear deal and support the pro-Iran “echo chamber.”

“Pro-Iran lobbies like NIAC were helpful to Ben Rhodes when he created his echo chamber to sell the Iran nuclear deal and the Iran money-for-hostages deal,” said one senior foreign policy consultant who has worked with Congress on the Iran deal. “It’s only fair that Rhodes would return the favor by keynoting NIAC’s conference. It’s not clear what he’ll talk about more: Iran developing its nuclear program, Iran expanding across the region, or Iran seizing more American hostages including those with close links to NIAC itself.”

The cozy relationship between Iran lobbyists and Obama administration may well explain why this past week it has been silent on the provocations, but it does not explain how to stop the regime.