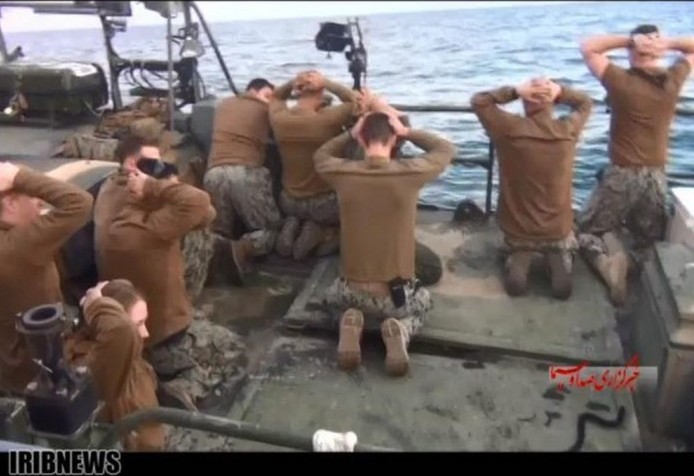 The arrest and detention of 10 U.S. Navy sailors by the Iranian regime and their release after 24 hours is being hailed by some regime supporters as proof of how a new cooperative relationship exists between the U.S. and Iran and how a similar situation might have led to armed conflict before the nuclear deal was agreed to last July.

Regime supporters and members of the Obama administration have even attempted to characterize the Iranian detention as a helpful assist to sailors lost in the waters of the Persian Gulf after allegedly suffering mechanical difficulties, but the images released by the regime are anything but designed to reassure Americans.

The detention was a political act and one designed to convey a specific message considering its timing just before President Obama’s State of the Union speech. It has been a hallmark of the mullahs in Tehran to invest heavily in message, meaning and symbolism. They do not do things haphazardly or without purpose.

The founding of the revolutionary Islamic state even had symbolic meaning with the release of 52 American hostages during the swearing in ceremony for President Ronald Reagan and the continued holding of Iranian-American hostages today also has meaning and symbolism for the regime.

When the regime paints an American flag on the streets of Tehran to be marched over, or builds a model of a U.S. aircraft carrier so it can be sunk on live television, or holds weekly prayer meetings to shout “Death to America,” they are all important symbolic acts for a regime controlled by mullahs deeply concerned over appearances and perception.

The mistake made by those who otherwise support the regime in its efforts to re-enter the international community is that they de-link all of the regime’s actions and treat them as specific, individual events with no relationship to one another.

The test firing of illegal ballistic missiles followed by the launching of rockets near U.S. Navy warships followed by the interception and detention of U.S. Navy sailors are not related according to these supporters of the regime.

They could not be more wrong.

Take for example the election of Hassan Rouhani as president of Iranian regime. Even though he served extensively in intelligence and national security capacities within the regime and was regarded as a trusted ally of top mullah Ali Khamenei, his election was portrayed as a win for moderates by the Iran lobby, led by the National Iranian American Council; forgetting that the previous slate of candidates, was wiped off the ballot by the Guardian Council, allowing Rouhani to win with virtually no opposition.

The mullahs learned their lesson from the disputed election of 2009 where street battles throughout Tehran showed the true nature of the regime to the world. Being mindful of appearances, the mullahs simply took everyone off the ballot that could be a problem.

Which is why the response by the Iran lobby has been interesting, as Shireen Hunter, a professor at Georgetown University, writes in the regime supporting Lobelog.com, that “both the tone and the behavior of the IRGC was quite mild, at least according to the institution’s usual standards. It insisted on treating the US personnel with respect and housing them in a comfortable and safe place.”

Anyone who has watched the video released by the Revolutionary Guard Corps can plainly see the U.S. sailors on their knees, being held at gunpoint with their hands clasped above their heads. They can also see video of a Navy Lieutenant apologizing on camera and saying how all of them have been treated well by their captors.

Oddly, the logic of the Iran lobby is that we should be thankful the regime treated their captives well instead of being upset they captured them in the first place. It’s the same bizarre logic applied to most of the regime’s actions where the Iran lobby has argued that the regime’s involvement in Syria has stemmed the tide of ISIS while neglecting to mention Iran’s intervention in Syria gave birth to ISIS in the first place.

You don’t thank a burglar for being neat after he’s robbed your home.

For the Iranian regime, the videos are powerful symbolism depicting the regime’s ability to confront and embarrass the U.S. military.

It also adds to the growing perception by the mullahs that the U.S. will do nothing in response to any provocation they choose to engage in. The litany of aggressive acts by the regime since the nuclear deal was signed leading up to the capture of the U.S. sailors has merited almost no consequences for the regime.

Ironically enough, even though the regime’s own officials deny the filling in of the Arak heavy-water nuclear reactor’s core with concrete, the U.S. is due to release up to $150 billion in cash before Iran’s parliamentary elections in February.

Common sense would dictate you don’t release the money until you know the election results to see who are you dealing with, even though we can already guess since the slates of candidates in the Assembly of Experts have to be approved by the Guardian Council and most dissidents that could have won seats in the lower house have already been rounded up and arrested at Khamenei’s orders.

As Sean Davis writes in The Federalist, “our military personnel were captured, forced to surrender on their knees, blindfolded, and photographed. Their images were then broadcast to the world on Wednesday morning by the Iranian regime, a clear violation of the Geneva Conventions. The American woman who was captured was forced to submit to Islamic law and don a hijab. State-run Iranian media announced that the whole affair was meant to be a “lesson” to “troublemakers” in the U.S. Congress.”

One would think if the Iranian regime really wanted to be helpful, why not just give the Americans a tow out of the area?