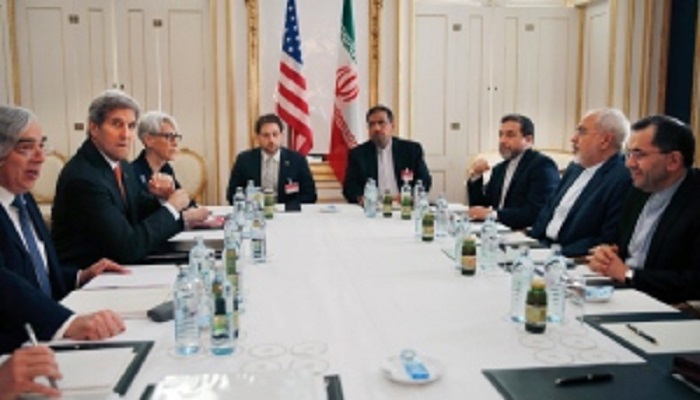 With only a day left before the self-imposed deadline of June 30 for this third and latest round of talks between the Iran regime and the P5+1 group of nations over Iran’s nuclear development program, it is becoming increasingly clear with leaked news reports that the deadline will be missed as regime foreign minister Javad Zarif heads back to consult with his mullah masters in Tehran.

It really is not surprising this deadline will be missed as well. Remember, this session was allegedly set to work out the “details” of the so-called “framework agreement” from last April in which both sides had supposedly agreed on the broad outlines, but within 24 hours conflicting documents were produced on what the framework agreement actually contained.

That “agreement” followed a similar missed deadline the year before and yet another agreement in November of 2013. Remember the 2013 deal? It released $17 billion in cash and assets to the regime for its alleged compliance with reduction in the stockpiles of enriched uranium, but instead, during the past two years under that interim agreement, those stockpiles actually increased by a whopping 20 percent.

It’s worth mentioning that the Iran regime got those billions just as global oil prices slumped and it was shelling out $6 billion to support Assad in Syria with Hezbollah fighters, not to mention the additional billions it spent to support the Houthi revolt in Yemen and Shiite militias in Iraq.

In essence, we have been paying for Iran’s proxy wars for the last two years.

But given the past three years of negotiating, what has been the common thread of failure in each of the previous sessions? Two words: Ali Khamenei.

The regime’s top mullah is empowered by mullah’s constitution with dictatorial powers over virtually all aspects of Iranian life including the judiciary, culture, foreign policy, economy and military matters. Jay Solomon reports in the Wall Street Journal how Khamenei’s constantly shifting demands, almost schizophrenic public rants and hardline stances have doomed every prior negotiating session and has potentially derailed this one as well.

“Mr. Khamenei’s hardline positions, announced in a nationally televised speech, appeared to back away from commitments his negotiators made in April to restrain parts of Iran’s nuclear program and to allow international inspections of the country’s military sites,” Solomon writes. “

“But there is concern in Washington and Europe that Iran’s paramount political leader may be boxing in his own diplomats by establishing terms they can’t deliver on. The 75-year-old cleric is viewed by the White House as the final decision maker on all issues concerning Iran’s nuclear program and foreign policy,” he added.

Solomon also disclosed the existence of secret messages passed between the regime and President Obama in which the mullahs in Tehran demanded as a sign of U.S. good faith the release of certain prisoners in 2009. The regime also demanded the blacklisting of certain Iranian opposition resistance groups and an increase in U.S. visas for regime students to study at U.S. universities.

It is noteworthy that the regime specifically called for actions against Iranian resistance groups, which have helped marshal global opinion against the regime over the years – and in the case of the National Council of Resistance of Iran – have helped disclose once-secret Iranian nuclear facilities angering the mullahs.

But in a startling concession, the U.S. arranged for the release of four Iranians including two convicted arms smugglers and a prominent scientist convicted of illegal exports to Iran. That early example of American concessions set the stage for the regime and Khamenei to believe they could get whatever they wanted from the U.S. and led to two years of mind-numbing talks in which the P5+1 caved on a whole series of concessions designed to appease Khamenei and hardline mullahs.

Now with admission that the June 30 deadline is moot, Western diplomats are breaking their silence and raising the scenario that the Iran regime is now backing out of its earlier commitments.

“There are a number of different areas where we still have major differences of interpretation in detailing what was agreed in Lausanne,” said British Foreign Minister Philip Hammond in a Reuters report.

“There is going to have to be some give or take if we are to get this done in the next few days,” he added. “No deal is better than a bad deal.”

Other Western officials echoed Hammond’s remarks, saying some of the backtracking involved the mechanics of monitoring Iranian compliance with proposed limits on nuclear activities according to Reuters.

The final clues of how far away the regime is removed from reality came in a posting by Reza Marashi from the National Iranian American Council and a lead supporter of the mullahs who is in Geneva along with his colleague Trita Parsi hobnobbing with the Iranian delegation in hotel hallways and lobbies.

Since Marashi and Parsi enjoy such close access to the confidential nature of these talks through the Iranian delegation, it’s worth noting the issue areas they call “myths” as clues to what frightens the mullahs the most.

Ironically, Marashi has laid out the case precisely posed by opponents of a bad nuclear deal in which Khamenei’s mouth has uttered all of these points in direct contradiction to Marashi over the past two years.

The kicker is the trial balloon floated by Parsi in which he basically delivers the regime’s position on Huffington Post of a three phase approval deal which includes the U.S. Congress approving the lifting of sanctions and the terms of a deal without it even being signed by the Iranians. He must have gotten the idea from Rep. Nancy Pelosi (D-CA) during the healthcare debate when she argued Congress had to pass the law to find out what was in it.

Parsi and Marashi seem to believe Congress and the American people will fall for the same trick twice.