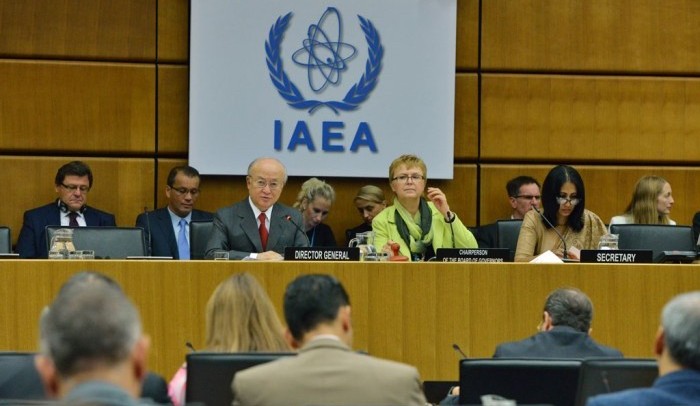 When Past Conduct Means Nothing for Future Actions

In all facets of our daily lives, we always take into consideration past conduct. If the plumber you hired did a lousy job fixing a leak, you aren’t going to hire them again. If the chef at a restaurant leaves a fly in your soup, you’re liable to walk out without paying and post a nasty review on Yelp.

But only in the case of the Iranian regime does this rule somehow not apply as evidenced by the turmoil over the recently completed nuclear agreement.

As Judith Miller and Charles Duelfer point out in an editorial for Fox News, “is Iran’s past – its habit of cheating on its international nuclear agreements — prologue? Should the Obama Administration accept Iran’s lies about its earlier efforts to design and develop a bomb in exchange for insisting on its strict compliance with the new deal it has made limiting the size, scale and nature of its nuclear program?”

The question is an important one as the International Atomic Energy Agency board of governors meets today to vote on a final report that largely overlooks the Iranian regime’s past history of lying and deceit over its nuclear program and instead rubber stamp approval of closing the file on the regime’s case even though the mullahs have not complied with the original scope of questions the IAEA had about its program.

As Miller and Duelfer explain, the IAEA’s own report damns the mullahs with faint praise:

The IAEA report states that Iran provided only partial or incorrect answers to some questions about efforts to design and test components of a nuclear weapon design (as distinct from the process of enriching the component nuclear material). Specifically, it concludes, Iran’s cover up has “seriously undermined the agency’s ability to conduct effective verification” at Parchin, a military site where Iran is thought to have tested implosion devices in a now-missing chamber. Based partly on a visit there which did not conform to usual Agency inspection procedures, satellite imagery and sampling at the site conducted by Iran but supervised remotely by the IAEA, inspectors dispute Iran’s assertions that only chemical weapons were stored there. The evidence to date, the report declares, “does not support Iran’s statements.”

“Overlooking Iranian stonewalling about aspects of its earlier work,” Miller and Duelfergo on to write. “Only makes it harder to devise an effective monitoring scheme for Iran’s current nuclear program, but also establishes a terrible precedent for arms control accords with other states. Because Washington and its allies are permitting Iran to begin implementing the new deal and get sanctions lifted with a lie, Iran’s past cheating is destined to be prologue.”

The fact that – moving forward – the agreement with the regime is built on a lie only means the mullahs have been given the green light to continue the same behavior in the future. It is a fact already made apparent with Tehran’s recent test firings of two ballistic missiles that violated United Nations sanctions prohibiting the development of nuclear-capable missiles.

Add to that the rest of the world basically did nothing about it except use harsh language.

It is a crucial point that Michael Singh, managing director of the Washington Institute for Near East Policy, and Simond de Galbert, a French diplomat and visiting fellow at the Center for Strategic and International Studies, elaborate on in an editorial in the Wall Street Journal.

“Continuing to insist on a complete investigation into Iran’s nuclear weapons activities is the first test of international determination to strictly implement the nuclear deal. Failing this test would signal to Tehran that the West will allow it to dictate the terms under which the agreement is implemented in the coming years. It would also undermine the credibility of international non-proliferation mechanisms, encouraging other would-be nuclear powers that they can escape scrutiny. If these mechanisms are to succeed in deterring Iran and others in the future, their integrity must be zealously guarded,” they write.

James Phillips, senior research fellow for Middle Eastern affairs at the Douglas and Sarah Allison Center for Foreign Policy Studies at the Heritage Foundation, was even more blunt in a piece in the Daily Signal.

“In short, Tehran is actively undermining longstanding U.S. nonproliferation goals on two fronts. Yet the Obama administration has done little to push back for fear of jeopardizing its risky nuclear agreement, which it believes will enhance its foreign policy legacy,” Phillips writes. “But the administration’s complacent acquiescence to Tehran’s disturbing actions is likely to result in a dangerous and unwanted legacy: an arsenal of nuclear-tipped missiles in the hands of the world’s foremost state sponsor of terrorism.”

Even members of President Obama’s own party are expressing alarm at the free pass being given the Iranian regime.

“I understand that most of Congress and the administration are very distracted by the global refugee crisis, by the terrorist attacks in Paris, by our conflicts with ISIS,” said Sen. Chris Coons (D-Del.) “The reality is with this deal, I’m on the administration’s side, but they need to be doing more…. We have to have a menu of responses that we and our allies have agreed on and that we will take. Or the Iranians will pocket it and keep moving.”

“We know even from the IAEA reports that they were engaged in a program — they weren’t truthful about that,” said Rep. Jan Schakowsky adding that “we need to be on top of what Iran is doing and do everything we can to have full compliance”

It is against this potential future where the Iranian regime is not held accountable that holds the greatest threat to global security and peace. It is a future that is zealously protected by the Iran lobby which has ignored the Paris attacks, the San Bernardino murders and the rise of extremist Islam fueled by the mullahs in Tehran who preach far and wide their radical beliefs.

It is also why even as San Bernardino attack victim Bennetta Bet-Badal, an Iranian who fled at age 18 during the Islamic revolution, was laid to rest at her funeral in California, the Iran lobby such as the National Iranian American Council could not even issue a simple tweet commemorating her death or the acknowledge the suffering of her family.

So while TritaParsi or Reza Marashi cannot send their condolences, we do on behalf of everyone around the world who yearns for peace and stands up to the threat of Islamic extremism.

To the family of Bet-Badal, we send our sincerest condolences and hope you will see a day when the world is free of mullahs issuing fatwas and dispensing brutality in the name of a faith of peace and love.