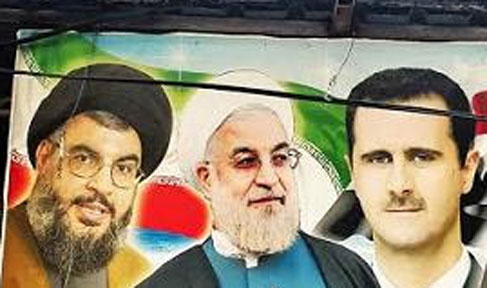 When Will Iran Regime Be Held Accountable for Terrorism?

One of the earliest lessons any child learns from a parent is that their actions have consequences. You scream, you’re told to be quiet. You hit your sibling; you get a time out in the corner.

These life lessons form the foundation of our behavior into adult life and help us conform to the restrictions and expectations of living in a civilized world. Even as an adult, we are constantly told our actions have consequences.

You show up drunk at work, you get fired. You rob a bank, you go to jail. You murder a person; you get sentenced to life in prison.

These are not hard lessons to follow and we all take to them fairly naturally.

Only in the arena of foreign affairs and politics do things tend to get more muddled and deviate from what we consider to be acceptable norms. In the case of the Iranian regime, those deviations tend to take on galactic-sized proportions.

Take for example Iran’s involvement in the Syrian civil war. It utilizes a proxy in the form of the terror group Hezbollah to fight on the side of the Assad regime. It uses its own Revolutionary Guard and Quds Forces to attack and target Syrian civilians. It recruited Russia to enter the war and used its fighters to target facilities such as Doctors Without Borders hospitals.

Throughout this bloody conflict, Iran has been selling the war to its own people like a variety show of television, using celebrities, actors and rich kids to justify its involvement.

As Varujean Avanessian writes in the National Interest, “Iranian officials rarely mention bolstering Syria’s Bashar al-Assad or maintaining access to Hezbollah in Lebanon as reasons for Iran’s intervention in Syria. Instead, defending the Shiite shrines and keeping ISIS away from Iran’s borders are the official theme vindicating Iran’s presence in Syria.”

“And a rather peculiar method is employed to peddle Iran’s message: formerly or currently banned celebrities now receive coverage from Iran’s conservative outlets, in exchange for offering favorable views on Iranian policies in Syria,” he writes.

Formerly banned TV host Reza Rashidpour—well known for his tough interviews with Iranian politicians and entertainers—was also enthusiastically covered by conservative outlets for trying to dampen the perception in the society that financial incentives are the main motive for Iranian fighters to go to Syria.

What goes unsaid is the regime’s use of financial inducements and pressure to recruit tens of thousands of Afghan refugees to fight in Syria. For the regime, the perception that paying fighters to go to Syria is the only effective tool it has to get the soldiers it needs is troublesome and worrisome to the mullahs in Tehran. It also underscores the inherent weakness of their position as the conflict drags on for years with no appreciable end in sight.

And yet the Iranian regime pays no penalty or suffers any harsh consequences from the international community for its actions in Syria.

The same can also be said with its almost daily threats to tear up an already broken nuclear agreement and restart its nuclear program—a program it historically denied ever existed.

Alaeddin Boroujerdi, chair of the Iranian regime parliament’s national security and foreign policy commission, warned that the Islamic Republic would “resume large-scale uranium enrichment” if leaders feel the international community is not doing enough for Iran under the nuclear deal.

“The Islamic Republic of Iran’s response to the other side’s non-compliance with the implementation of the nuclear deal will be uranium enrichment,” Boroujerdi was quoted as saying in Iran’s state-controlled press.

His bluster follows similar statements made by top mullah Ali Khamenei last month and have come to take on a certain “boy who cried wolf” tenor as regime leaders start focusing their ire on Western nations for the inept handling of their own economy and the rampant corruption running through regime-controlled industries.

Even more alarming were statements made by Hezbollah’s leader Sayyed Hassan Nasrallah were he openly thanked the Iranian regime for its financial and material support over the years to his terror group.

The admission comes on the heels of Financial Action Task Force (FATF), the intergovernmental organization that sets global standards to combat money laundering and finance for terrorism and proliferation, once again placing Iran on its blacklist for supporting terrorism, yet granting the regime a reprieve from any additional sanctions in the hopes the nuclear deal might eventually pan out.

On what planet do you need to be from to connect the dots of Hezbollah’s own admission of support from Iran for terrorist activities and yet no consequences come from it?

Mark Dubowitz and Toby Dershowitz noted in a Forbes editorial that Tehran’s efforts to pass laws that purport to address international counter-terrorism financing standards are hollow and don’t conform to FATF standards. Iran’s definition of terrorism, for example, excludes groups “attempting to end foreign occupation, colonialism and racism,” and has other language used to justify terrorism against America and its allies. Iran’s leaders are telling the world “we will arm and bankroll whomever we want but won’t call them terrorists.”

The White House itself urged Iran on Monday to stop giving financial support to Hezbollah, warning of such continued backing won’t seep into “its interest.”

“We know that Iranian regime supports terrorism,” the White House deputy press secretary Eric Schultz told reporters aboard Air Force One. “And we know that Iran supports Hezbollah. And that is why we’ve issued the most serious and most severe sanctions ever on Iran for doing so. So it’s important for them to recognize their own behavior in enabling this.”

Yet, the same administration is trying to convince foreign banks to bankroll the Iranian regime and ignore the inconvenient truth of its support for terrorism.

It is arguably the most obtuse argument ever made in foreign policy since Neville Chamberlain came back from Munich claiming “peace in our time” from Adolf Hitler.

All of which goes to show that unless the Iranian regime finally understands the consequences of its actions, nothing will ever change there.