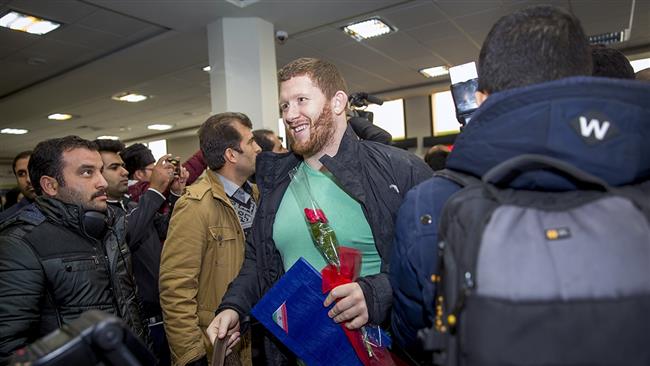 Nothing illustrates the cold, calculating nature of the Iranian regime than two incidents happening this week.

On the one hand, an American wrestling team was welcomed with open arms, red roses and a barrage of social media selfies as it arrived in Iran for a tournament that had been threatened in response to President Trump’s visa moratorium.

The two-day tournament began Thursday, when U.S. wrestlers faced off against Georgia, Russia and Azerbaijan. The Iranian regime didn’t miss the opportunity to stage photos of the Americans being surrounded by well-wishers and flooding social media with comments praising the team, but deriding the U.S. government.

Another, Nima Jan, said he was traveling to the stadium to cheer for the Americans,

“You proved that you are a noble man.… This is a big chance for us,”Nima Jan commented on an Instagram. “We do not pay attention to the behavior of America’s government” toward Iran, according to the Washington Post.

Widely considered a national sport, wrestling has been one venue to maintain a cultural channel between Iran and the U.S. In fact, a U.S. wrestling team became the first American sports team to visit Iran since the revolution.

In contrast to that public photo opportunity, in the dank, dark confines of Evin prison, a British-Iranian mother and an aid worker languishes, falling ill and being denied medical treatment by the regime.

According to the Times of London, Nazanin Zaghari-Ratcliffe, 38, who has been held in prison since April last year, was denied urgent medical treatment for a neck injury sustained in prison that has left her unable to lift her arms or carry her child.

Prison officials last week refused to refer the charity worker to a neurologist, despite an X-ray and MRI scan revealing that vertebrae in her neck were out of place.

She is unable to move her arms beyond a certain point or lift her two-year-old daughter Gabriella, who is also trapped in Iran after regime authorities confiscated her British passport.

The cruelty of Ratcliffe’s continued incarceration and denial of medical care has earned sharp rebukes from the British government and human rights groups, but it follows a typical pattern of abuse heaped on detained dual national citizens by the regime.

Repeated incidents like this, depict an essential truth of the Iranian regime which is that it is without compassion or mercy and utilizes innocent people to its political advantage on the world stage. It will willingly use a sports team to stage a photo opp to protest moves designed to restrict the movement of terrorists supported by the Iranian regime and it will also put the screws to an ailing mother to put pressure on a British government balking at opening up trade with the regime.

The mullahs are cruel and callous and any press releases or news interviews by Iran lobby supporters such as Trita Parsi of the National Iranian American Council cannot hide that simple truth.

The mullahs calculate every move and weigh every opportunity. They are less religious leaders and more like accountants and they count up the ill-gotten gains they receive from their various black market channels, especially with the nuclear agreement which opened up additional sources of funding to them.

Heshmat Alavi, an Iranian activist, penned a piece in Forbes looking at how the regime was benefitting from the nuclear agreement.

“Now in early 2017, however, signs indicate the main winners in Iran are none other than state-owned companies. This means Iranian Supreme Leader Ali Khamenei and the terrorist-supporting Revolutionary Guards are enjoying JCPOA benefits,” Alavi writes.  “At least 90 of the nearly 110 agreements, totaling nearly $80 billion, involve such state-controlled companies. This includes the National Iranian Oil Company, parallel to others run by regime pension funds and massive conglomerates of semi-public nature.”

“It is a known fact that Tehran maintains a heavy hand over the economy, providing circumstances allowing state-controlled firms to acquire most business deals made possible after sanctions were lifted. The private sector makes up a mere 20% of Iran’s economy, according to official estimates,” he added. “To this end, private companies have received a dismal 17 deals, including a hotel management contract sealed most probably because of the French partner’s chief executive being the brother of Eshaq Jahangiri, Iran’s vice president.”

For the Iranian regime, decision-making is all about perception, economic benefits and exporting its extremist brand of Islam.

Unfortunately, until the world joins together again to confront the Iranian regime, innocents such as Ratcliffe will continue to pay the price.