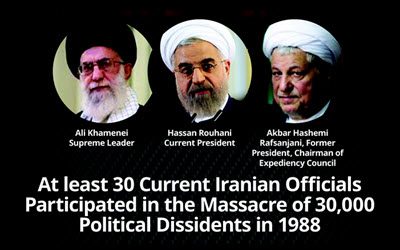 Far from the pomp and pageantry of the United Nations General Assembly session opening and its parade of speeches from world leaders, small acts of defiance help shine a light on one leader in particular who will do his best to put a happy face of a skull and crossbones situation.

A mother and daughter have bravely filmed themselves cycling in an Iranian city in defiance of a fatwa that says it is a danger to women’s “chastity”.

The fatwa, which has been announced by Iran’s top mullah Ali Khamenei, prevents women from cycling because it “exposes society to corruption”.

The video shows two women wearing hijabs and face veils cycling on a road in what they say is Kish, an island territory belonging to Iran.

“My mum and I are from Tehran,” the woman holding the camera says.

“Bicycle riding is part of our lives. We heard Khamenei’s fatwa banning women from cycling,” the woman says. “We immediately rented two bicycles to say we’re not giving up cycling.”

“It’s our absolute right and we’re not going to give up,” she adds defiantly according to the Independent newspaper.

As protests go, this one is not likely to go down in history akin to Martin Luther King’s march in Selma or even the mass Arab Spring protests that rocked the Middle East, but in Iran, where almost any act of civil disobedience can lead to imprisonment, torture and even death, riding a bicycle if you’re a woman is a pretty brave act.

But for 30,000 Iranians in 1988, the penalty for their alleged act of disobedience—by being associated even remotely with the People’s Mojahedin Organization of Iran (PMOI/MEK)—earned execution at the hands of the leaders who now hold leadership positions in Iran.

The mass killings recently re-entered the international spotlight when audio recordings of former top cleric, Hossein-Ali Montazeri came to light last month. The late ayatollah had been the heir-apparent to the founder of the Islamic Republic in the 1980s, but was ousted from his position and from the regime itself as a result of the contents of the recording, in which he condemned the mass killings, calling them a stain on the memory of Iran’s honor.

Tom Ridge, the former secretary for homeland security, noted in an editorial in The Hill that Montazeri’s long-suppressed tirade specifically confirms some of the most shocking details of the proceedings sentencing these people to death, including the execution of teenage girls and pregnant women.

A large demonstration was held today in front of the UN protesting Rouhani’s scheduled appearance and the continued presence of so many regime leaders in power today who participated in those massacres.

As Ridge points out, one of the individuals heard on the 1988 recording is today the justice minister in the Rouhani administration, Mostafa Pourmohammadi, who was the Intelligence Ministry’s representative on the Tehran “death commission,” which held the minutes-long trials to determine which of the local political prisoners would be put to death. On the recording, Pourmohammadi eagerly defends the activities that Montazeri described as the “worst crime of the Islamic Republic.” And today he characterizes the massacre as the enactment of “God’s commandment” regarding the MEK.

Rouhani comes to the UN session though with more baggage as news comes out of Iran of more crackdowns and human rights violations, which clearly demonstrate that under his “moderate” reign, things have gone from bad to worse; a prospect that seemed unimaginable after the brutal terms of the former president Ahmadinejad.

According to Al-Monitor, reports surfaced of the arrest of Sadra Mohaghegh, the society editor of the Reformist Shargh Daily. His sudden detention has caused an outcry among journalists, activists and Iranian netizens, who have turned Mohaghegh’s name into a hashtag — especially after Mohaghegh’s Twitter account was taken down on Tuesday for unknown reasons.

According to Basij News, Mohaghegh was arrested “during an intelligence operation by security forces,” without specifying which agency was responsible for his arrest. Media reports accuse him of having collaborated with “counter-revolutionary” foreign media. The detention comes only days after the arrest of another Iranian journalist, Yashar Soltani, who is in charge of Memari News, a website that focuses on urban news and architecture.

Rouhani’s appearance in New York is also being met with heavy pressure from the family and relatives of Western hostages being held by the regime, including Kamran Foroughi who has flown from London to New York for the past three years to beg Rouhani for the release of his ailing father, Kamal Foroughi, 76, on humanitarian grounds. The British-Iranian dual national has cataracts, spent 18 months in solitary confinement, and is barely halfway through his 5-year sentence on espionage charges.

Foroughi came to New York with Richard Ratcliffe, whose wife, Nazanin, also a British-Iranian dual national, was sentenced last month to five years in prison on espionage charges while visiting her parents. Their 2-year-old daughter, Gabriella, has had her passport confiscated.

The same judge, Abolghassem Salavati, presided over the trials of Zakka, Foroughi and Ratcliffe. He is known for handing down harsh sentences in high-profile political cases. He also sentenced Washington Post reporter Jason Rezaian, who was released along with three other Iranian-Americans in a prisoner swap in January when the nuclear deal was implemented, according to the Washington Post.

Even newly-installed British Prime Minister Theresa May was under pressure to raise the plight of Ratcliffe in her meeting with Rouhani on the sidelines of the UN session.

It is hard to imagine how any objective observer can now claim that Rouhani’s term has been a moderate one. The human rights violations have been so prevalent, so brutal and so constant that it is a wonder why the world’s representatives simply don’t walk out on his speech.