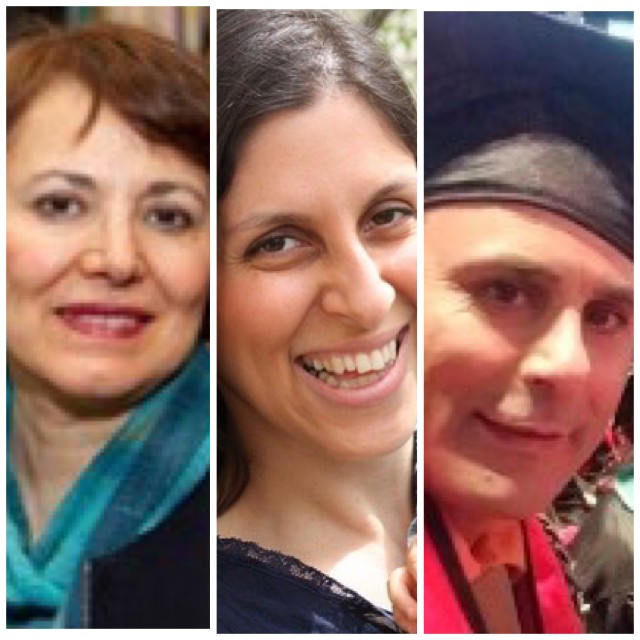 Who is Really in Charge of the Iran Regime?

The Iranian regime has been busy snatching up citizens of other countries without charge, trial or contact with the outside world. They have been U.S., British, French and Canadian citizens; dual national Iranians. They have been professors, students and aid workers.

None were terrorists, criminals or even political. They all had the misfortune of being in Iran and possessing a passport of a foreign country. It seems that alone was sufficient for the Revolutionary Guards to pick them up, put them in prison and walk away.

The New York Post editorial board blasted the practice and blamed earlier acts of appeasement for sowing the seeds for this behavior.

“Iran is re-stocking its larder of American and other Western hostages, clearly convinced the Obama administration won’t dare make it an issue. Tehran this week arrested yet another US citizen and plans to place him on trial — though on what charges, it won’t say,” the Post said.

“The State Department says it’s ‘looking into’ the latest arrest, which is pretty much all it can do. Iran doesn’t recognize dual citizenship, so won’t even allow consular visits to those being held.

“Some analysts suggest the Revolutionary Guard is insisting on the arrests in order to deter Western businessmen from visiting Iran with investment cash. Funny: Getting such investment was supposedly Tehran’s major motive for accepting the deal’s supposedly tough restrictions on its nuclear-weapons program in the first place,” it added.

The arrests do raise an interesting question: Who is calling the shots in the Iranian regime?

The Iran lobby has long maintained that a rift and power struggle is going on within the regime between the forces of moderates versus hardliners. Loyalists such as Trita Parsi of the National Iranian American Council have used that talking point incessantly in pushing for approval of the nuclear deal with Iran last year.

They promised a nuclear deal would usher in a period of moderation and empower these so-called moderates in upcoming elections.

The opposite has happened as the region has literally gone up in flames with wars now raging from Syria to Yemen and terrorist attacks striking the U.S. and Europe with almost daily frequency.

In Iran, parliamentary elections were rigged with the removal of virtually all perceived dissenters or moderates removed from the ballot even before voting began. The only group of “moderates” elected was a small cadre in Tehran only and even they have turned out to be loyal to the regime and ruling mullahs as evidenced by elections to return the hardest core extremists to leadership positions in the parliament and supreme council.

Many media outlets have characterized the hostage taking as evidence of the internal power struggle within the regime.

The Christian Science Monitor described by saying “the targets of the most radical elements of Iran’s competing power blocs are increasingly Iranian-Americans and other dual nationals visiting Iran to see family or pursue academic interests. They are being ensnared in the upheaval and redistribution of power in the wake of last year’s nuclear deal, experts in United States-Iran relations say.”

“Iranian hardliners opposed to President Hassan Rouhani and his diplomatic opening to the US and the West are widely assumed to be behind the detentions – and would not appear to be easily persuaded to permit the detainees’ release. But at the same time, some Iran experts say they see a window of opportunity for some kind of prisoner deal before President Obama leaves office,” it added.

The fact that speculation centers on the Iranian regime snatching up Americans and Brits for the purpose of another round of prisoner swaps in exchange for more economic concessions says volumes about the intentions about the regime, but it says even more about who is calling the shots in the leadership of the regime.

The time-honored tradition of hostage taking by the mullahs in Tehran was even conceded by Iran lobbyists as being unlikely to die off.

“But the prospects for freeing Iran’s imprisoned dual nationals before Mr. Obama leaves office – not to mention ending the practice altogether – are not bright,” says Reza Marashi of the NIAC.

“You have to put the likelihood at 50-50 at best,” he says. “The ability to align timing and interests, that’s completely up in the air.”

The best the Iran lobby can offer these poor, innocent victims of the regime are 50-50 odds they will be joined by more hostages.

All the evidence points to the fact that Hassan Rouhani has never been a moderate and is rock-solid in step with Ali Khamenei and his fellow mullahs on these actions. Has Rouhani called for these prisoners’ release? Has he condemned them? Has he even so much as posted a tweet describing any regret over these actions?

The answer is a resounding no.

The hardline nature of the regime can be seen in the everyday cruelties and injustices visited on ordinary Iranians. Beyond the more gruesome aspects of the regime’s rule, including public executions, amputations and beatings of women on the street, everyday acts that seem perfectly normal to any Western citizen are viewed as subversive and dangerous.

A group of women were reportedly arrested for riding bicycles in Iran and made to sign pledges not to repeat the “violation”.

They were planning to participate in a cycling event in the north-western city of Marivan when police told them a new government directive had barred women riding bicycles in public.

The opposition National Council of Resistance of Iran said officers ordered them to sign written pledges vowing not to repeat the “unlawful violation” and took several women who protested into custody, according to the Independent.

In another incident, up to 150 people were detained by Iran’s morality police at a mixed-gender party in Tehran. In the sweltering heat of summer, as people spend more time outside, the authorities tighten their grip on social norms, cracking down on activities deemed un-Islamic.

Such restrictions have become a regular feature of Iranian life since the current theocracy has come to power after the 1979 revolution, as members of the morality police appear on the streets, or are deployed in vans at public places, to tackle women defying the compulsory hijab, men with non-approved hairstyles, or males and females partying together, according to the Media outlets.

But even with all these acts of suppressing free expression, defiance among the Iranian people still finds a way to surface as many men have posted photos of themselves wearing the hijab to social media, in solidarity with women in the country, who are forced to cover their heads in public, the Independent reported.

Many of the photos show a man wearing the hijab next to his wife or a female relative whose hair is uncovered.

It isn’t much in the way of defying the regime, but in a nation where simply holding a U.S. passport and being an Iranian can land you in prison, even these small acts can grow to become important changes to the regime.